Posted on January 6, 2018 by Semere Andom in Articles 57 Comments 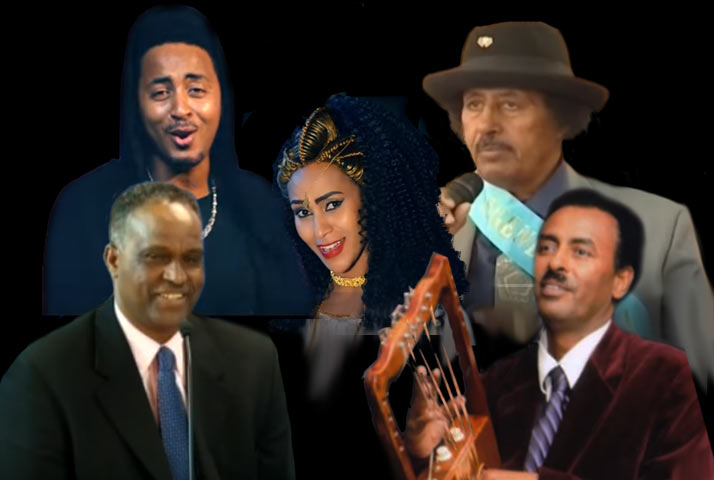 You are a survivor
A child of promise
You are protected like the iris of the eye
Time flies, you are at the age of engagement and marriage
During the planting season before the rains fall
My heart led me, and I came to visit you
I stand on your threshold and say how are you
Please reply that you are fine, before my knees tire
For your sake, I have lived as a homeless
For your sake, I have braved the jungle
You are a light in darkness and a star of the dawn,
Today shall pass and tomorrow shall arrive
The discomfort too shall pass, the mountains shall become plains
Every night has its dawn
An imposing presence that no one dares
So those behind the mountains will not molest you
So the adolescents would not touch you
Tell them that you have bulked up
Tell them that you have strengthened your arms
These are the lyrics from Aklilu Tefeno’s “Hilleley”

He asks the country to lie to him, by replying she is doing well. And then asks it to lie to itself by asking her to tell those behind the mountains (emba kolele) and adolescents (gonnable) that she has bulked up so they would not dare touch her. But the country knows, he knows, we all know that those behind the mountain are still in our land and those “adolescents” are molesting the country. And we also know that the country has not bulked up, it has withered away from starvation.

Although he lends his voice to it, Haile Mariam Haile Silase (Lingo) wrote the lyrics of “Hilley” This is the same guy who saved Ambassador Zemede’s face when the later used the podium and megaphone to kiss up to the EPLF military leaders who attended the Bologna festival in 1991 when he said: “These are the people who gave us the independence” When Haile Mariam took the microphone he corrected: “These are the people who led the battles that gave us our independence”. Now from afar, he wrote the lyrics for Aklilu and is asking the country, the “Hillel” to lie to him, that she is fine before his knees tire as he is standing on the threshold.  He does not seem to know or he left it to the listeners to discern, but in Tigrinya the phrase, (ድርዂኺት ሒዘ): holding on the threshold has a cultural meaning of the evil eye (budda/tebbib). If someone hesitates and stands on the threshold, people would often quip, “come-on in, why are you standing in the threshold like tebib/budda.

And then, there is this kid. He is well dressed, fed, groomed, and privileged. He goes to Sawa and tells the kidnapped teenage girls that there is no problem (tsegem yelon habtey), that there no hardship that one cannot get used it. Notice: it is not, there is no hardship that one cannot triumph over. Rather stay put and you will get used to it, he tells them. And the kidnapped girls swoon.

In every aspect he is privileged, even his name is of privilege, Temsghen Yared, his parents gave thanks to Yared, the descending. The overwhelming number of those who were swooning to his crooning, those he was preaching to, would have their second name as Worede instead of Yared, because many of them would not be so privileged to read the Bible to get acquitted with the name of the grandson of Adam, Jared: The Descending.

But Aklilu Foto and Temesgehn and Lingo are disciples of artists and writers before them: those who wrote the “Judgement of Mount Arrey (Frdi Gobo Arrey) and McHadara from Badme to Sahel (Wedi Hadera Kab Badme nSahel), two pieces of Tigrinya literature written during the armed struggle. Both laden with lies and misinformation of the armed struggle itself, its players and its heroes and its cowardice. So the singers and writer in question stood on the shoulders of the two writers, whereas the first two sharpened their pens, the two singers cleared their throats to lie to us through our language and our music and our beat and our predicament that we are intimately familiar with.

But it gets worse. As if the Eritrean women have not endured enough abuse and manipulation and suffering, a woman artist, through her art tells Eritrean women to love the bum and the dangerous kind instead of the accomplished, the learned.

Generous and a frivolous spender
His sweet words are portentous
A manipulator who charms you to a consent
The bum is a cool lover
Is she nuts to fall for a useless bum?
While the learned and wealthy beg her
They wonder
But, they know not that the bum is cool
And an expert in love and loving
They gossip behind my back
Is she out of her mind?
Superior to geography professor
The bum shows me the word of love
Better than the scientist, the bum teaches me about living and nonliving things
Superior to a legal scholar, the bum teaches me the laws of romance
Better than a phycology scholar, the bum reads my mind
There is no one like the bum
He does not need a written word to feel my emotions
You cannot do better than the bum
The bum likes to huddle for a binge drinking
He celebrates everyone’s holiday
Love is his faith, king, government
Sometimes the bum ignores me and then makes up
He then insults me and gives me advice
At times he makes me cry then makes me happy
He makes me angry and then cajoles me artfully
And sometimes he makes me jealous and then makes up with me
It is the ignoring, the insulting, the cheating and the dangerous kind
That spices it up for me
And drives me crazy.
These are the words of the Eritrean Singer, Saba Andemariam.

Writers sometimes suffer from what they call “writer’s block” and it is conceivable that those who write the lyrics for these singers do as well. If you are one, do not despair! I can help you with writing better lyrics for your stars as I just have bestowed upon myself the inaugural title of “ራ.ሃ.ቛ” (ራእሲ ሃገራዊ ቛንቋ).

Why not? The strong man of Eritrea, Isaias Afwerki has just bestowed upon Bereket Mengsiteab a new award, “ራ.ሃ.ባ” (ራእሲ ሃገራዊ ባህሊ), the Dean of National Culture.

Granted, Bereket has an immortal voice, but that is, as Apostle Paul would say by grace, for free, gratis, not by merit. Bereket is the artist who used his voice to sing for the anti-liberty crowd: “No need for freedom of expression or question or comment, no matter how small, let us hold on to our guns tight…”, he crooned to the delight of dictator Isaias Afwerki. While he lived the high life, he preached the Warsay, “what is the use of life and living…”

Some fans point to his older songs like Meley. In it, Bereket asks a passerby stranger to pass his regards to Meley. I miss you a lot Meley, come to me. Meley is behind the mountains. I sent my regards with the wild wind. Bereket is quick to point out that this was a political song, a coded message for the youth to join the armed struggle, to inspire them.

And in “Libey”, he does what a friend and writer calls, geography lesson, where Bereket roams from Asmara to Keren to Sawa and Togoruba and back to Massawa to colorfully describe the beauty, the scent of his love, presumably, Eritrea. I can go on and on about his shallow lyrics and divisive songs and “please take my gun from me…” before he left the armed struggle to escape death, to live life, decades before he changed his mind about the precious nature of life.

So Isaias Afwerki’s accolade to Bereket is for loyalty and not for elevating the national culture. Bereket, accepted in deference to the president he told Voice of America, but like the mortal dictator and the Pushkin Monument, the title of “ራ.ሃ.ባ” will be here today and gone tomorrow. It is transient.

Also, Bereket was conferred the doctorate degree, I think, the anti-liberty crowd in the USA were flattered by Bereke’s late 1980s song, “ሰመን ኣመሪካ ብዙሓት ምሁራት አርትራውያን አለውዋ”:  North America has many Educated Eritreans, he sang when he was impressed by their fluency in their English.

It has been said that Eritrea is a country without a government and opposition and lacks intellectuals with integrity, now we can say that what Eritrea lacks, it makes up in the abundance of “wattot”, the pseudo-artists from times immemorial, who canonize and flatter men of means to get their daily bread instead of doing an honest day’s work. And that is why our grandfathers would ask about your pedigree to discern if you have a “watta” lineage before they give you the hand of their daughters, daughters that Saba is manipulating to fall in love with the loser kind in her song, “I am in love with the bum”.