Tyranny: Slavery Of the 21st century 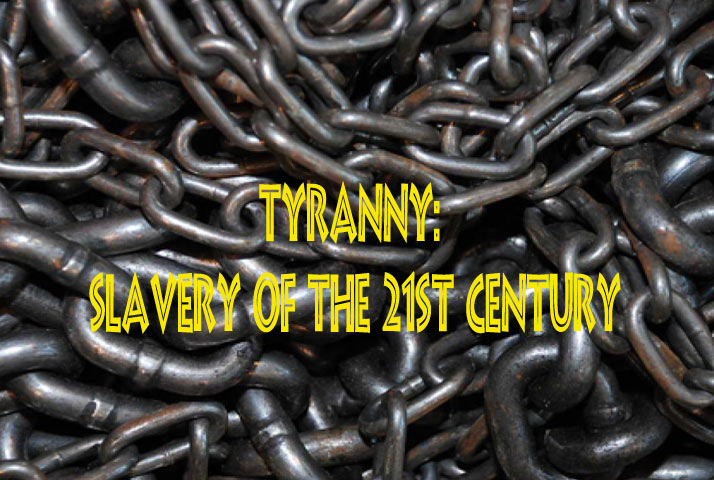 The last twenty-six years have been the most painful years for the Eritrean people. For more than two decades Eritreans went through the most brutal acts of evil. Here, I would like to share my personal experience and testimony.

I vividly remember the colorful and joyful day when Eritrea was liberated after ending the Ethiopian rule in 1991.

Though I was only six-years old my memory is still clear, and I remember the joy and happiness that Eritreans expressed on Independence Day. We literally stayed in the streets singing, dancing and breathing a fresh air of freedom.  Two years later, in 1993, Eritrea was formally recognized as a free country by the UN.

At the time, the whole nation was united and celebrated in unison; for the first time in the history, Eritrea was going to be led by its own people. Citizens from all walk of life: farmers, professionals, religious leaders, and everyone, else was eager and ready to cooperate with the newly formed government in Asmara. Even the Diaspora Eritreans started to return to their country with big dreams and plans to permanently settle in the country and to support the government in building the nation. The reality, however, was quite the opposite.

For the last twenty-six years, the self-appointed government had done all in its power to control the people and kill the dream of many. Furthermore, relative to the available resources, the potential of the country and the needs of the people, no substantial progress had been achieved in terms of development. Ironically, Eritrea has a long coast in the Red sea: it has two seaports, valuable minerals, and most of all, a very hard working, well cultured and God-fearing people—a sound base of any country’s progress. Instead, the government built a wide network of prisons and secret detention centers. It also carried out arbitrary and random arrests. Furthermore, it launched a forced labor program thus violating the citizens’ basic human rights. Consequently, the UN accused the Eritrean government of gross violation of human rights.

Some of the serious violations committed by the government against the people include the closing churches and arresting religious leaders and members of many Christian denominations while putting the Orthodox patriarch under house arrest.

Slavery in the 21st century!

Often, tyrannical governments engage in false accusation and arrested dissenters to keep its grip on power and perpetuate slavery. The reign of terror forces everyone out of the country.

As what is taking place in Northern Africa illustrates, the nightmares happening in that region are beyond the worst imagination of most Eritreans. It is painful to realize that only a handful of world organizations are acting to solve the situation while the rest of the world is turning deaf ears to the cries of the innocent victims.  It’s unbelievable and shocking to learn that such cruelties are taking place in the 21st century. It’s an unfortunate reality that the world has woken up to. But who is to blame and what is the world doing about it?

Eritrean and other African youth are the victims of an unfortunate situation in their birth countries. And sadly, they unknowingly paid a lot of money to end up in such a deplorable situation where they are being enslaved anew. Survivors of the ordeal have testified that the money they paid for the illegal journey in pursuit of a better life, was either borrowed or they had to sell everything they owned. Of course, they were deceived into believing the smugglers would escort them to countries where they would find a better life.

It is prudent to realize that, for the young Eritreans, slavery did not start in Libya. As unbelievable as it may seem, the reality is that they have been enslaved in their own country by the entity that claims to be their government.

Since the last twenty-six years, Eritrean youth have been subjected to slavery under the guise of ‘National Service’, which is described by the victims as entry gate with an exit. That is a place where they had been brainwashed to believe they were serving their country when they were serving the few people in power.

Unfortunately, the European Union is eager to provide funds to the Eritrean government to avoid an influx of refugees into Europe. Certainly, the EU is ignoring the bigger picture that illustrates how Eritreans are suffering under the corrupt and selfish government.

Sadly, any funds will only make matters worse and encourage the government to continue its oppression of the Eritrean people. Is that the best way to help Eritreans who are fleeing their country to avoid enslavement by the government? Is the EU willing to disregard the violation of basic human rights in Eritrea?

Abundant evidence shows that the youth are running away from the wanton persecution and from the hellish life that the government subjected to the people, mainly the youth, to. As such, funding a government willing to treat its young citizens in an abhorrent way is hardly a solution—it’s an embarrassment to anyone who thinks otherwise.

There is enough information about the situation in Eritrea to provide Europe (including the UK) with enough tools to help resolve the problem in Eritrea. Testimonies by the victims provide enough explanation to why those victims are taking such an extreme risk to get to Europe. Sadly, they had to brave the shoot-to-kill borders to fleeing their country hoping to lead a decent life, or at least live a normal life.

It would help Eritreans greatly if the world organizations looked at the full picture to realize that the Eritrean government is equally responsible as Libya outlaws in enslaving the youth. I urge the international community, such as EU, USA, UN and other organizations, to exert pressure and condemn the actions of the Eritrean government, and to hold it accountable for its actions. Much pressure is also needed to force the government to release the many prisoners of conscience it holds incommunicado, and to respect and honor religious freedoms and basic human rights.

In conclusion, I believe the legacy of the self-appointed government has run its course. The mask of tyranny has dropped from its face and has exposed its true color, and its violations should not be tolerated anymore. The Eritrean people have suffered enough, and it is time for the regime to go.