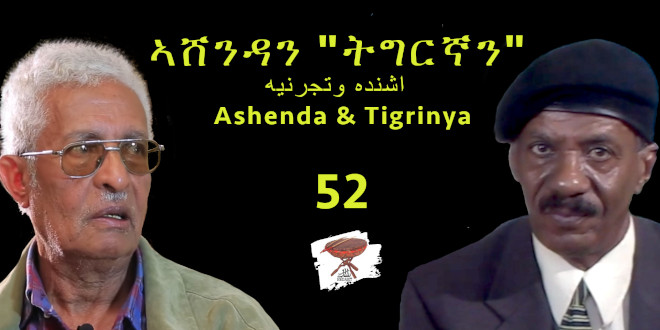 If you remember, in last year’s Ashenda the Tigrayans were inflamed because it seems they faced hindrances in holding the festival at the Millenium Hall in Addis Ababa. I wondered why in the first place they wanted to hold a local Tigrayan festival in Addis Ababa! And out of solidarity I suggested something constructive. I say constructive because this year, they accepted  my suggestion that I provided in my Negarit Episode 18, on September 1, 2018.

Good job and I am happy I was of some help. But don’t swindle me claiming, “We thought of that on pour own!”

I am not sure of the exact financial gain out of this year’s Ashenda festival, but I heard many people turned out to celebrate it in Tigrai: how about a consultancy fee? It’s earned.

This time it would have been an appropriate payment since for many years, I and many of my colleagues were disparagingly accused of being funded by the Weyane.  Please do not send it with the fascists who are suckling from your tits. They are not trustworthy.

But Ashenda could compete with EnquTaTash/ Christmas, etc.

Amanuel Sahle. I respect the man a lot, and still do. That’s because in Tigrait (ours, the Eritrean Tigrayit language) there is a saying: qerimka semieE besir lideyyu. I would rather debate and communicate with Amanuel Sahle instead of a hundred declared fascists, who are basically hundred gourds—there is no difference.

My concern is: in his last speech, which surprised many of his previous students, unlike the philosopher Amanuel I perceived, he sounded more like Wedi-Sahle (Son-of-Sahle), he sounded a typical provincial.

After mentioning all the cross-border communities related to Eritrea, Amanuel said,  “…..it’s only the Tigrinya who does not get along well… what made them that way?” That is not true.

But there are important factors and I feel he didn’t want to mention them. Therefore, I would like to volunteer and tell him why.

Apart from the Tigrinya speakers, whose image he had in mind, Amanuel didn’t mention any Muslims at all. He didn’t mention the Saho speakers from the Highlands or the Danakil from the costal areas. But he said, “these Eritreans didn’t fight Italians, because it is not their country…” As outrageous as it is, it is not even half truth, it is a convenient lie, by omission.

Of course Amanuel knows that the Italians came during the reign of Yohannes, who was wreaking havoc all over the place: Tigrai, present Eritrea, Wollo, Afar-lands, etc. But in expanding. Is domain and controlling the people, Yohannes was not interested in Language (Tigrinya) as a bonding element He wanted his empire to be baptized and adopt his religion and he was forcing everyone to convert.

Now, if people were persecuted based on their faith, and they were overwhelmed by the violent hordes of Yohannes, what would they do? They will hold to any force that will protect them and they preferred to be under the Italians instead of the brute Yohannes. So, Amanuel didn’t want to say it, but the people who led the Italians to Asmara were in fact Eritrean Muslims. I will add to that, the first people who flocked to Hitmlo (Massawa) to be armed by the Italians were Muslims. They had enough persecution and they wanted to protect themselves from Yohannes and his hordes.

Until then, the Muslims were not interested in wars and some of them were not armed at all. Because of that, they were uprooted from their lands and were interned at the camp of Tekhlai and Gebru, both lieutenants of Alula, king Yohannes’ general.

See! The lands of highland Eritrea were taken by Alula’s settlers, based on the 490-year residence law (deqi-40) that Alula imposed. And the original residents became prisoners and were in internship in several places.

Grieved by the situation, the Naib of Massawa contemplated a sanction against the Abyssinian king and threatened to close the port of Massawa if Yohannes didn’t stop mistreating the Muslims. That is when Alula decided to have Degiat Hailu of Tzaazega sponsor the Muslims—just like a present day Saudi kefil (Sponsor).

If any Muslims ventured outside the internship camp, Alula’s soldiers harassed them based on their religion, until they explained they were “Aslam Degezmati”, sponsored by the Degiat of Tzaazega. These are the Muslims, together with others in similar situations in the highlands, who flocked to Massawa to be armed by the Italians. Not because they wanted to surrender their freedom (and they had none), but to protect themselves, their lives which were the only thing they had.

So, I am disappointed by Wedi Sahle because he sounded like a third-rate scholar, unlike what I expected. I believe he should have shunned the notion of “History is written by the victorious”. Instead, should have held and pursued the notion that history is told by true scholars, brave scholars who would tell the truth to the most ruthless of tyrants—regardless of the repercussion. I am disappointed Wedi-Sahle sounded like an ideologue, a party cadre, when he should have stayed a scholar.

Wedi-Sahle said, “If Tigrinya speakers do not unite, we will go back to the old problems, Amhara, etc….”

I thought he spoke Italian! I will not delve into grammar because I do not versed in it. But my little Italian language familiarity helps here.

In Italian, a plural is constructed with an “I” vowel at the end.. Zagno becomes Zangi, Regno becomes Regni, Segno become Segni. Surprise! Tigrigna becomes Tigringi. Tigringi is the plural of Tigrigna (which by the way is Tigrinya), do not try to give it a mythical origin dating back to centuries. Simply it is gli Tigringni di Tigrai. Half of what these groups (who profess linguistic and religious supremacy) holds as a slogan is Italian. They could say, Tgrawot, not Tgrigni, unless they are Italians or speaking in Italian. I told you, I am here to bust myths, call me myth buster.

That my friends, is the very reason the overwhelming number of Eritreans fear—going to the old ways of pillaging, invasions, religious harassment and the like. In this, I confidently say, all genuine Eritreans, those who believe in Eritrea, and aspire for freedom, justice and peace, whether Christians or Muslims, whether lowlanders of highlanders or coastal region dwellers, agree. Fully.

I would also like to remind the fascists to stop threatening other Eritreans by wielding the Tigrinya stick (Northern Ethiopia). But why do they think they are the only ones who can forge cross-border alliances? Don’t they know alliances are open to all if it gets to that? Are the regions south of Eritrea the sole ownership of Tigrinya speakers, their reserve forces? What is there to prevent other Eritreans from forging similar alliances… be it in the south, east, or north of Eritrea?

I hope they stop this losing, destructive rhetoric, the “gorge heads” are salivating by what some ideologues are preaching. But if they get their way, we can only see a copy of ISIS, Daesh—this time in a Tewahdo garb. The only difference is when an Isis rascal slaughters an innocent person he will cry “Allahu ASkbar”, while our fascists would cry, “In the name of the father, the son, and the holy ghost”. Identical.

Sadly, this is the 21st century—any such provocations are so costly and instead, one should preach humanity’s goals and values of the century—justice, peace, and freedom for all. And if anyone thinks Eritreans will give in to blackmailing and give away their country, it must be an utter stupidity.

May Eritrea be protected by internal, external and in between ill wishers. May it prevail with the determination of its children, all of them, under the slogan of Justice. Peace, and freedom.

Finally, in the future, I would like to do a comparative narration about the history of Ahmed Gragn. Of course, there are two narrations. But so far, the church narration is overwhelming and it has been adopted by the majority of Abyssinians. But there is another narration that many Abyssinians not not know about. Was the Gragn invasions that are kept alive as if it happened yesterday, a myth, a lie, a misunderstanding, a civil war, or an invasion. What was it. I will not wait for Wedi Sahle but I will be delighted if he changes from his language-centric rhetoric and tries to reclaim his scholarly credentials. Until then, I plan to dedicate an episode on Imam Ahmed AlGhazi, known as Gragn,  very soon.

I will try to demolish the myth that Abyssinians have been bombarded with for five centuries.