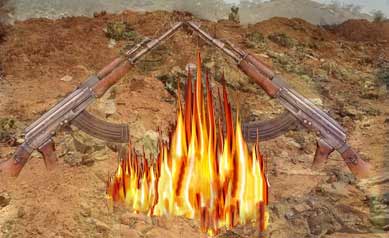 Gedab News has received credible information that the shoot-out between Eritrean and Ethiopian border-patrol soldiers of last weekend was triggered when some of Eritrea’s conscripted soldiers crossed the border to Ethiopia, were shot at by Eritrean soldiers, and members of armed Eritrean opposition groups hosted by Ethiopia returned fire.

(a) On Saturday night, around midnight, Eritrean youth, mostly members of the National Service, crossed the border to Ethiopia. Past the border town of Tsorona, on the Ethiopian side, are at least three armed Eritrean opposition groups;

(b) Members of Eritrean Defense Forces (EDF) pursuing the escapees and deserters fired their guns;

This exchange goes on from midnight to four am on Sunday morning, with the Eritrean Defense Forces escalating by using mortars and RPGs;

By 5:00 am, the Ethiopian National Defense Forces (ENDF) joined the fray and the Eritrean opposition groups retreat from the area;

From 5:00 am Sunday until mid-afternoon Monday, the EDF and ENDF call re-enforcement and exchange heavy artillery fire, with Ethiopian forces penetrating into Eritrea and Eritreans waging counter-offensive.

The Ethiopian government’s initial statement that there were “no clashes” is either because it was not aware of the clash between the Eritrean Defense Forces and Eritrean opposition or, more likely, that it doesn’t want to draw attention to the fact that it is hosting armed Eritrean opposition groups.

Similarly, the Eritrean government is not going to admit that it is engaged in a civil war with Eritreans since it doesn’t even recognize that they exist.

Despite the fact that Ethiopian government spokesperson has reported “significant casualties on both sides”, the international community is yet to voice its concern and call on both parties to de-escalate the tense environment.

Supporters of the Eritrean government have already begun pointing to the conflict as justification for why Eritrea needs to maintain a large conscript army pressed into indefinite service. The battle also highlights the fact that the Eritrea-Ethiopia border remains un-demarcated due to Ethiopia’s refusal to abide by the ruling of the Eritrea-Ethiopia Boundary Commission, and, despite representations made by the International community that they would apply pressure on the party which doesn’t comply, they have not.

Opponents of the Eritrean government are also pointing out to the conflict to demonstrate that for as long as the “National Service” remains indefinite and Eritrean youth are forced into harsh labor, its members will use every avenue, even the militarized border between Eritrea and Ethiopia, to risk death and try to escape.

Additionally, the fact that there are still exiled armed groups, twenty-five years after Eritrea’s independence, demonstrates the absence of the right to organize, assemble and practice peaceful politics within your own country.

It is unclear if the guns are silent now. Eritrea’s president, Isaias Afwerki, has given orders to the Eritrean Defense Forces to remain in a state of alert and to anticipate an offensive from Ethiopia.

Over the years, whenever the government of Ethiopia battled with Eritrea-hosted Ethiopian opposition groups, it had repeatedly threatened that any future military engagement with Eritrea would result in Ethiopia taking overwhelming measures to ensure that such engagements would not be repeated.

In this engagement, the Ethiopian opposition forces do not seem to have been involved.