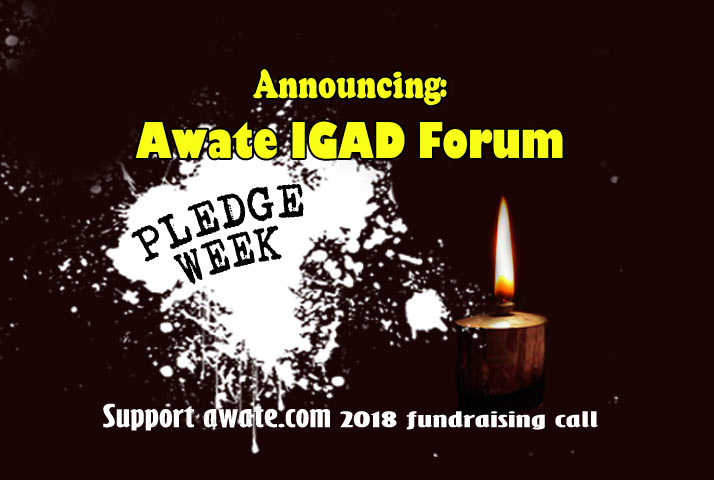 Two days ago, we launched the 2018 fundraising entitled “Support Awate.com” campaign which will continue for some time. The response during the last two days has been encouraging to the extent that it inspired us so much we have decided to announce one of our enhancement plans ahead of time–we believe we do not have to wait since this is the right time to launch it.

Awate.com was launched on September 1, 2000, to serve Eritrea since the situation needed a serious alternative voice, particularly after the Eritrean ruling party took complete control of the media by shutting the nascent free press, arrested its editors, journalists, and writers.

Currently, the times have changed and so has the nature of the challenges we face. The interdependent interests of the IGAD region and its surroundings, developments that we have been warning about and tried to address, have now become too evident to ignore. Sadly, the IGAD region is exposed to many dangerous risks that require the cooperation of its citizens that we believe is vital to its future. Unfortunately, the weakness of the region’s intellectual power and its absence has left a vacuum that our region is overwhelmed by political merchants who have been wreaking havoc in our general affairs. We believe it is pertinent that the stakeholders of the region take charge of their own future. They should also proudly celebrate their successes while courageously owning their failures and shortcomings.

Our vision requires only genuine friends, world citizens with a clean conscience, progressive views and be liberally inclined. Many world citizens have been exceptionally helpful to our region and they are great friends, and they are always welcome. We appreciate their noble stands with the people of the region.

It’s no secret that the Awate Team has no power and no resources to impose its vision, though it is in full command of its conscience. Importantly, it has the resolve to contribute to the regions’ wellbeing and the dignity of its people. Such ideas cannot be achieved by any number of narrow-minded ultranationalists who tend to build more fences between peoples. The destructive forces of isolationists and war-mongers should be fought with resilience and determination by enlightened forces of intellectual, activists, writers, and people of good will. However, we need to remember that such a soft power of peace and understanding cannot be built overnight, it requires hard work and dedication which should start immediately. And that is why we have decided to launch it now.

It is helpful to remember that big plans do not necessarily need to start big. Also, even if we wanted to start big, we do not have the capacity needed. However, just as we have started with a modest mission to “inform, inspire, embolden, and reconcile” in the context of Eritrea almost 18 years ago, we will now expand our mission to include all the people of the IGAD region. We believe peace and stability, human rights, and development in our region is indivisible and impacts the entire region and beyond.

Towards that end, we are launching our modest plan to get nearer to that grand goal of facilitating mature, enlightened, and informed dialogue with the aim of spreading awareness and understanding. And that we are confident will ultimately serve the overall wellbeing of the peoples of the IGAD region.

As a start, we have decided to hand over the Awate Forum (with a suggested transitional working project name is, Awate IGAD Forum (AIF)) that will operate as follows:

Evidently, we do not intend or expect to achieve our goals in one go. The above is just a suggestion to help us move forward; it is our view on how the project should proceed. Therefore, we are expecting serious, honest and insightful discussions where all should diligently participate. We are determined to make this plan a reality and we are confident you all are.

Finally, we would like to bring to your attention that the fundraising drive will continue until we reach our goal—we hope you understand the graveness of the issue. We also would like to express our appreciation for the enthusiasm and cooperation that all of you are showing in the fundraising campaign–nothing is impossible if driven by the kind of spirit we are witnessing.

Thank you all for sharing our vision and for striving to make it a success.