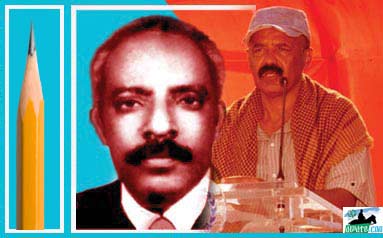 EriTV has a slogan: Serving The Truth. Yet, the government-owned national television and its sister outlets rarely engage in serving the truth.  Erasing historical figures and events from the memory of Eritreans, and rewriting history to serve its political interest has become the primary preoccupation of the party that rules Eritrea unelected. The strategy has succeeded in confusing some Eritreans and still today there are few in the diaspora who consume its misinformation. For the overwhelming majority of Eritreans, however, the deceitful practices have become a source of embarrassment.

The government of Eritrea celebrated the 30th anniversary of Wikaw Iz on March 21-23, 2014. That victory was a turning point in the history of the Eritrean struggle; it signaled the beginning of the end of Ethiopian occupation. It is a landmark of Eritrean ingenuity, bravery and sacrifice and a source of pride for all Eritreans. No amount of fanfare will adequately reflect the importance of the event; and it should not be held against the government if it fell short; what should be held against it is the forgery and deceit.

The Eritrean government doesn’t have much use for any prideful event, heroic act, or historic victory if it doesn’t serve its own partisan interests, even if it is at the expense of our national pride, and the honor of those we remember as our martyrs with reverence. The total blackout on the name of General Uqbe Abraha was the most obvious and disheartening. How could one celebrate Wikaw Iz without mentioning the name of its heroes? It is like talking about the battle of Waterloo without the Duke of Wellington who defeated Napoleon, or remembering the battle of Togoruba without mentioning Abu Rejela. When remembering the victory of Wakaw Iz, no one can overlook the name of General Uqbe Abraha, the heroic commander who led the Eritrean forces to that victory which eventually paved the way to Eritrea’s independence. The story of Wikaw Iz cannot and must not  be told without its main character: General Uqbe Abraha.

On March 26, 2014, Ahmed Mohammed Nasser, who led the ELF in its glory days, when it liberated a large portion of Eritrea, died and was buried in Sweden. Ahmed fought for fifty years: first to rid Eritrea from the occupation of successive Ethiopian regimes and finally against the ruling party’s injustices. The regime doesn’t have the decency to acknowledge the death of an Eritrean hero and a popular leader who had played an important role in the making of a nation: Eritrea.

General Uqbe Abraha was the first Chief of Staff of the Eritrean Army. He was the Commander of the Eritrean forces that defeated the Ethiopian occupational army, Wikaw Iz, in 1984. In 2001 he was arrested together with other senior government officers and ministers known as G15 for calling for democratic reforms. The General  spoke to Isaias Afwerki defiantly, warning of dire consequences for the nation, if the president and his government fail to make timely and necessary changes. In the middle of the chaos that followed 9/11, when the whole world was focusing on New York, Isaiasrounded the G15 and put them in jail. To this day, nothing concrete is known about their fate.

General Uqbe Abraha is presumed dead by many sources. Some Eritreans who have deserted  the regime have confirmed that Uqbe died almost a decade ago and was secretly buried by the government. The regime has not disclosed any information about his fate or his colleagues, or the many Eritreans who are languishing incommunicado in PFDJ’s dungeons since 1994.

General Uqbe was born and raised in Dekemhare where he attended elementary and secondary schools. He studied briefly at the Haile Selassie University in Addis Ababa before joining the Eritrean liberation army in 1972. After completing military and political training, Uqbe served the EPLF in various roles and capacities, which included the Fedayeen units. He was finally elected a member of the politburo in EPLF First National Congress.

In 1977, Uqbe also became a member of the Military Committee, composed of Politburo members, under the leadership of martyr Ibrahim Aafa (military training). The other members of the committee were Petros Solomon (intelligence, and one time commander of the Nakfa front), Ali Sayed Abdella (security and one time commander of Nakfa front), Berhane Gerezgher (medical department), and Uqbe Abraha (logistics and supplies).

General Uqbe is best known for building and commanding the Northeastern Sahel front from 1979 until 1984. The front extended for seventy kilometers, north to south, from Dembebit to Qettan. Its depth extended for fifty kilometers from Mersa Teklhai, on the Red Sea shores, to the Alghena river.

While others rarely commanded a single front for an extended period of time, Uqbe commanded that front for five years, until the Ethiopian Wikaw Iz (Command) was completely defeated and routed out of the region. It was the first Ethiopian division to be completely wiped out of the four divisions in the region, including the Mebreq Iz  that was earlier hit at Kur and Kerkebet.

The 1984 victory over Wikaw Iz was a culmination of several battles that preceded it, including a major battle where the EPLF sustained heavy losses—particularly brigade 84 which suffered heavy losses. But in 1984, Wikaw Iz was decimated and the Eritrean forces captured thousands of prisoners, large amount of ammunition and supplies, including armored trucks, tanks and artillery. That victory incapacitated four Ethiopian army divisions that were stationed around the Northeastern Sahel front, freeing the Eritrean forces to deploy to other fronts, including the Halhal front.

The 1984 victory is significant because it elevated the capabilities of the Eritrean forces to a higher level. Following that victory, Eritrean forces became confident enough and strong enough to start the final push which resulted in the liberation of Massawa, and finally the whole of Eritrea.

After the 1984 defeat, Ethiopian forces had attempted to recapture Northeastern Sahel, and invaded the region towards the end of 1985 in a campaign they dubbed Bahri Negash, a campaign that involved two major battles in which the Eritrean forces came out victorious under the command of Petros Solomon. After Eritrean independence, Petros took several ministerial portfolios until he was jailed together with Uqbe and the other members of G15.

The victory over Wikaw Iz is an important landmark in the chronicles of the Eritrean struggle. The Eritrean forces had suffered heavy losses in previous battle against the division; in the final battle, they were determined to avenge the previous defeat. A veteran who was at that battle explained, “we were filled with the feeling of vengeance, we wanted to avenge the disaster of the first battle, and at the final battle, fear was totally banished.”

Two of the commanders who worked under Uqbe when Wikaw Iz was destroyed were his deputy Philipos Weldeyohannes, (then a brigade commander, now a general, and chief of staff) and Idris Breray, who left in 1985, joined PLF briefly, and then lived in Sudan and Germany. In 1994, Breray returned to Eritrea only to be arrested and jailed for four years—the government never disclosed the reason for his arrest.

Ironically, during the heavily promoted celebrations, neither the government officials in their speeches, nor the state media mentioned General Uqbe’s name. A veteran of the armed struggle who participated in the two major battles that led to the victory over Wikaw Iz said, “it is odd. In fact it is a betrayal and deceitful to celebrate the victory of Wikaw Iz without mentioning General Uqbe.”

The Ethiopian commander of Wikaw Iz was General Hussein Ahmed who is admired for his cunning abilities and bravery by many Eritrean commanders. General Hussein met his formidable foes in the Eritrean forces under the command of Uqbe and his assistants. After fighting bravely, his forces were decimated and he was forced to abandon and escape the scene. General Hussein is now living in the USA (awate.com is working to locate and interview him.)

Uqbe Abraha is remembered by his colleagues and subordinates as a resilient warrior, a good listener, a humble, respectful colleague, a brave soldier, and an able commander. Yet, the senior army officers and administrators of the Eritrean government who were busy celebrating the anniversary of the victory of Wikaw Iz, seemed to have conveniently forgotten their colleague General Uqbe Abraha, the hero who commanded  the victorious forces in 1984–the very reason for the celebration.