Posted on August 5, 2019 by awatestaff in Awate Team 18 Comments 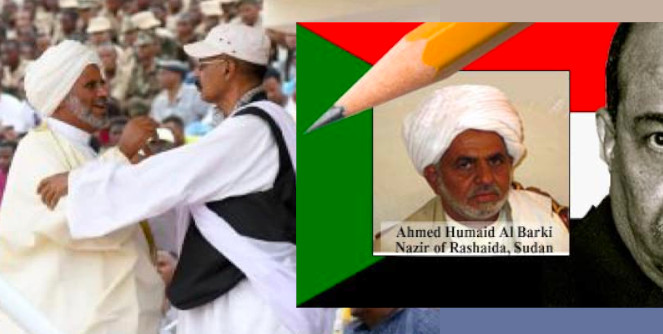 The above is a composite image, part of which appeared with an editorial by the Awate Team in 2014 while the second part is a propaganda image widely distributed over the last few days.

In Eritrea and in other parts of the world, the PFDJ has been busy celebrating the 25th anniversary of Sawa military training and indoctrination camp. As usual, extensive preparation was done to make the military parade the main focus of the celebration, an impressive show. Isaias Afwerki also appeared in a national outfit of the Eritrean lowlands. The military parade and the appearance of Isaias in a traditional attire captivated the imagination of the supporters of the ruling party. Of course, the celebration couldn’t highlight any achievement save the impressive target shooting skills the trainees acquired and the appearance of Isaias Afwerki in a national attire. But one flop explains two types of emptiness: the regime’s non-stop propaganda, and the naïveté of its supporters, particularly those in the Diaspora. 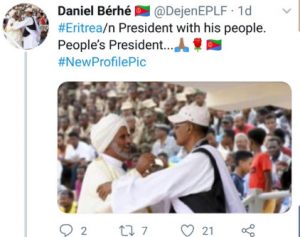 In a widely distributed image in which Isaias appeared with a man, the captions read, “President with  his people” and “People’s president”. However, if the PFDJ and its affiliates are naturally forgetful, or chose to be so, their Eritrean victims are not.

To begin with, we do not believe a picture with a person can be considered proof that Isaias “loves his people”, but worse, the man in the picture with Isaias is not “his people”. He is the Nazir, Ahmed Humaid Al Burki, a chief of the Sudanese Rashaida tribe.

On December 4, 2014, awate.com published an editorial under the PENCIL carrying a content image of Ahmed Al-Burki. The article was written when human trafficking was at its highest level and Eritreans were being kidnapped, abused, and blackmailed all over Eastern Sudan.  You can click HERE to read the whole article, but below is an excerpt:

This led to more discussions between the leader of the ELF, Hussein Khalifa, and the leader (Nazir) of the Rashaida, Sheikh Ahmed Humaid Al Barki. On February 5, 2010, the Nazir issued the following statement: …READ THE  EDITORIAL “Who will speak for the voiceless Eritreans by the Awate Team” LINKED HERE