Posted on December 8, 2015 by Semere Andom in Articles 73 Comments 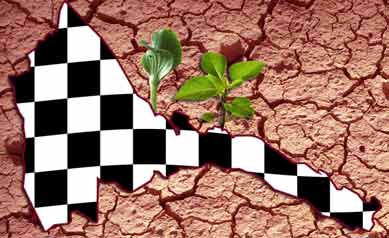 During the time of the liberation struggle, it was all “kosher”, it was all for the sake of independence. But even after independence, assassinations still remained ‘kosher”, because it was all for the sake of development, for the good of the country’s future. “Revolution feeds on its own children!” we were told, whoever coined that phrase must have been smoking something out of this planet, but Eritreas bought it and almost collectively showed nonchalant attitude towards both types of assassinations. Now in the era of the struggle against a tyrant, both types of assasinations are prevalent, still unfettered, still unchecked, still undocumented. Yet if you harshly criticize PFDJ, you are accused of character assassination.

As Saleh wrote in his postscript, politics is an evolving thought, when facts change you change your mind, former foes become friends when they redeem themselves and mend their ways, former nemesis become allies when they abandon the regime and right their old wrong. But have the Medrehkites[ii] only physically left PFDJ or have they really mended their ways, have they reflected on the very policies and actions that supposedly made them abandon PFDJ, or have they defected because it was fashionable, a trend, not to be left behind.

Andebrhan Woldegiorgis left PFDJ, he wrote a book, “Eritrea at Crossroads”, and in his interview with Dr. Russom of Eri-Spora, he articulated how he locked-horns with Isaias Afwerki when he worked to institutionalize the banking system. He reminisced about how he felt when Eritrea gained independence, describing it as a mixed feeling of sorrow about the dead who were left behind and the jubilation of finally accomplishing what Eritreans set out to do. He successfully curbed his true behavior in the face of hard questions from Dr. Russom. With practised politeness, with a fake joviality that hankered on the, old, good-times of Ghedli, he came across as a changed man during the interview; a changed PFDJ man was what we want and what we should embrace and encourage. We celebrated his defection. But anecdotes of his character slowly emerged and his treatment of Saleh is not the culmination of his character, it is harbinger of a slow relapse to a fully-fledged PFDJ outside the circumference of Isaias Afwereki.

Shengeb, a former student union leader is not well- known but  some time in 2003, Awate wrote this about him: “Muhyedin’s hands are bloody: he sits on a committee that abducts people.”

This report is very true, Shengeb was behind the disappearances of vocal student union members in Sudan even before independence. Still his defection was a welcome news, as slowly chipped away PFDJ machinery, is a triumph. And we celebrated as we should. Despite keeping silent for over a decade, he has recently emerged out of the woodworks as a leading member of the Medrekh that rubber stamped Saleh’s removal from the meeting, a meeting that was billed as a conference to unite the opposition.

Saleh decided against a showdown after Andebrhan vetoed to expel him from the meeting he was invited to, he wrote. His first instinct, like most first instincts was the right one, it would have become the litmus test of who genuinely espouses the ideals of tolerance, reconciliation, freedom of speech and inspiration. Had Saleh proceeded with it, it would have exposed those who rubberstamp on behalf a bully and a penchant of a dictatorial trait. Saleh chose the tried and failed “lbbi m’ebaay” of his former organization, whose big heart was so unfit because it was bigger than its size.

The biggest lie ever told during Ghedli and to Eritreans is the “lbbi m’ebaay”, yet again, instead of testing the Medrhkites on their tolerance stamina, practically quizzing them on their democratic fitness, Saleh succumbed to what ails Eritreans, the so called “big heart”

The moment one slightly criticizes the likes of Ambassador Andebrhan and Dr. Asefaw, one is quickly reminded that these people have abandoned their PhDs and their good life in the West to join the struggle. That is true, and for that, the Eritrean people handsomely rewarded them, bestowing upon them accolades and the unfettered trust and access to chart the posterity of their nascent nation, the best honor one can receive for his hard work. Besides, these people have it better than the rest of the people, the orphans and the parents who lost five of their children during the war. So the defence that they left their comfortable bed to sleep on the floor should not impress the Eritrean people much, as the Canadian Country singer Shania Twain put it:

Consensus, reconciliation, rule of law, freedom of speech, tenets that Saleh stood for the last twenty-five years were the victims of Saleh’s “wise” decision not to hold the meeting hostage. Belligerence, arrogance, intimidation, assassinations must be punished and how best to punish it than rendering that meeting a “failure”. It was not an august gathering to begin with, it lacked courage when it succumbed to the old and tired mantra of “stay away from Ethiopia”, its members among them, Shengeb and Dr. Asefaw showed cowardice when they failed to stand up to Andebrhan, even at the risk of rendering the meeting a failure. That meeting should have been the sacrificial lamb for truth and freedom of speech, its “failure” should have served as a courageous move for nipping the bully in the bud, for purging the budding despot that Andebrhan is from its ranks, for making an example that no one person should wield unfettered and unchecked power. The meeting might have concluded without split but it was a failure. Failure is success in this particular circumstance. But that required big men and women with “small hearts”. The Medhrekh leaders turned out to be small men and Saleh owned a “big heart”.

Everyone in the meeting relapsed: Andebrhan relapsed to his old PFDJ pedigree when he threatened to physically remove Saleh, Shengeb and Dr. Asefaw both relapsed to the old PFDJ mode of allowing a bully to get away with “atrocity”, atrocity on freedom, atrocity on liberty and atrocity on the ideals of tolerance that we dream to erect. Even Saleh Gadi Johar relapsed to “wisdom”. Semere Habtemariam also relapsed when his heart warmed up to Medrekh for reasons hitherto unknown. This was an affront to the larger justice movement as the actions are the “greenshoots” of the blossom of what epitomizes PFDJ.

[i] Ghedli, Tigrinya language reference to the Eritrean armed struggle for liberation (1961-1991)
[ii] Medrekh is the Tigrinya appelation of the “Eritrean Forum” also knows as Munteda in Arabic