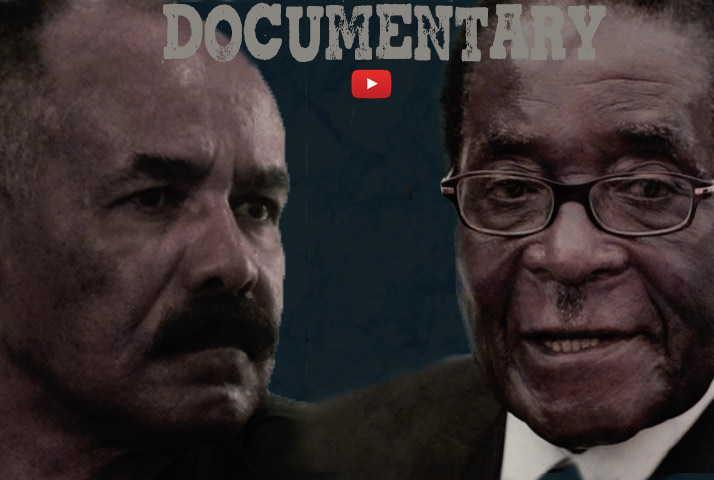 [Apologies: apparently the video that was linked to here seems to have been pirated. The full version is now not accessible. The clip above is the trailer of the documentary which is available on Netflix.]

Many people like to compare countries, that is why you hear Eritrea is the North Korea of Africa. That comparison is not like comparing apples with apples, it is like comparing ice cream with apples.  The appropriate comparison should be more realistic than that. For instance, comparing the Eritrean Popular Front for Democracy and Justice (YPFDJ) against the Zimbabwe African National Union (ZANU). Once you do that, you will be led to the next logical step: comparing Isaias Afwerki of Eritrea against Robert Mugabe.

Both presidents were born in the month of February and both were leaders of a revolutionary organization. Both men are leaders of the only ruling political parties in their respective countries and have been holding state powers for too long. While Mugabe has been in power since 1987 (30 years), Isaias has been at the helm since 1991 (26 years).  The two do not tolerate dissent or opposition, and despite their oppressive regimes, they survive thanks to their strong intelligence and security forces that are structured to protect their power.

Today is Christmas Day, and we are presenting to you ‘Democrats’, a documentary that was shot In Zimbabwe over a period of more than three-years. It illustrates the Zimbabwean political climate, the process of constitution making and the problems it faced (adopted in 2013), the sensitivity, the risks it faced, and the participation of the Zimbabwean people and parties–you cannot help but consider the PFDJ a copy of ZANU which controls Zimbabwe and rules the people with fear. You will see the Zimbabwean version of “Nhna Nsu”, no one should ever  think of replacing the incumbent. You will also see the aged and helpless veterans of ZANU. In short, the documentary explains the position of many Eritreans who reject any pretend reform activities initiated by the PFDJ. If you consider the documentary a report about Eritrea, you wouldn’t be too far from the truth.