Home / Documents / September 1: It Is About The Man, Not The Date

September 1: It Is About The Man, Not The Date 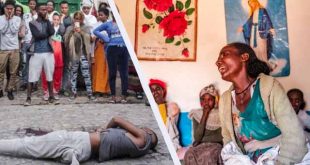 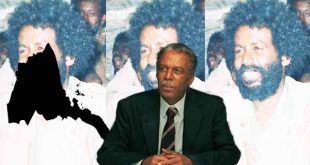 Almost every English-language book written about Eritrea over the past four decades– the most recent being  Michela Wrong’s I Didn’t Do It For You—is the history of Eritrea as seen by people who belonged, or were sympathetic, to the Eritrean People’s Liberation Front (EPLF.)  It is, to put it charitably, an incomplete story.  And sometimes, as some have come to learn with the EPLF/PFDJ’s treatment of its own G-15, it is worse: a complete whitewash and distortion.  One of the missions of awate.com—the one that drives our opponents insane and, thus, gives us utmost pleasure—is to refuse to allow the revisionists, the inventors and the slanderers to get away with their crimes.  We do this with relish when it comes to our hero, and the man that this website is named after: Hamed Idris Awate.

Today is September 1, 2009.   What does September 1 signify to Eritreans?  What would it have signified to Eritreans if the revisionists were allowed to get away with their distortions?  Let’s ask shaebia, the ruling party in Eritrea, which chose to explain this not in its party’s website (shaebia.org) but the government’s website (shabait.com).  And if you can’t find it in either website, don’t worry, you can always find it in their mirror site, meskerem.net, the “opposition” website which, if it had one single mission, would have been to protect the legacy of the Day it is named after, but never mind:

As the nation celebrates this year’s September 1st (Bahti Meskerem) marking the 48th anniversary of the launching of the Eritrean people’s armed struggle for independence, it is imperative as ever to recall and reflect on the history of the Eritrean Revolution and its living significance, as well as enduring lessons…

The first challenge essentially emanated from internal factors that took place in the 60s and the beginning of the 70s as a result of internal division and civil war. We not only emerged strong and victorious but also succeeded in ensuring the continuity of our struggle through building a dynamic leading national democratic organization, namely the EPLF.

Witness how the ruling party is loathe to mention the party or individual responsible for launching the armed struggle and, only a paragraph later, to morph September 1 into a celebration of the EPLF—an organization that didn’t come about until 16 years after the launch of the armed struggle.   Witness how September 1 is casually Tigrignacized to “Bahti Meskerem” when, just for as long a time as “Bahti Meskerem” (longer, actually), its Arabic rendition, “Al-fatih min Sebtember” was what was used to describe September 1 by those who started the revolution.

Researchers and historians take note.  This is what actually happened.  This is the what, the how, the when, the where, the why and most assuredly the who of September 1.  And as for those who have been relying on the EPLF/PFDJ to narrate true history, we ask one question: if the EPLF/PFDJ has lied to you about everything, why do you expect it to be truthful to you about history?

He was an uncommon man.  By the time he was involved in the activity that he became famous for, September 1, 1961, he was already 50 years old.  Which is to say: he had established a long history of resistance against injustice: whether it was the British administration, or random bandits, or the government of Haile Selasse.

Hamed Idris Awate was born in Gerset (in the Omhajjer-Tessenei area of Western Eritrea) in 1910. Gerset is a fertile area in the Gash-Setit region which was in the headlines last year for the dam construction that the PFDJ likes to advertise and the unwise demographic changes it has been engineering.  (If you go to gerset.com, you will learn nothing about gerset: but you can see a video of the usual PFDJ icons: people getting ready to dance; people wearing T-shirts with pictures of Isaias Afwerki, etc.)

Hamed was born to a family which taught him the values of independence and, at a young age, he had become quite adept with a rifle.

Here it should be noted that some groups claiming to represent the Kunama people (and those who copy/paste anything uncritically as long as it agrees with their prejudices and biases and as long as those being accused are unable to defend themselves) have taken to speak of Hamed Idris Awate as having been involved in criminal activities.    That is a treatise for a different day: we are not celebrating Hamed’s biography:  we are celebrating one day in his life: September 1.  And the biography only to the extent that it can shed light on that day.

We do not wish to dwell on the man’s charisma, or leadership skills, or language acumen, impressive as they may have been.   What matters to us is that he symbolized a character long identified with Eritreans, but now seemingly in short supply:  the courage to stand up against injustice come what may.   Taher Indool, who wrote the most authoritative account, narrates the story:

At end of World War II, [he had served in the Italian colonial army] Awate returned to his village.  He went back to a humble life style where he can farm and raise cattle.  During an operation of search for arms, the British confiscated properties and killed cattle of the localities in Gash\Setit and Barka areas.  In a self-defense, Awate killed one of the soldiers.  Consequently, the British authorities accused Awate of committing a crime and forced him to live as a fugitive for some time.  Awate defended his people from the British plunders and other bandits who crossed the border from the Sudan into Eritrea, the Shifta from other parts of Eritrea and Ethiopia who used to raid and loot the properties of people of the Gash\Setit and Barka areas.

Awate commanded a group of 40 gunmen who actively operated against the British forces causing heavy losses among them.  Aware of his great influence and role, the British colonial authorities decided to negotiate with Awate in order to avoid embarrassments and cool the tension with him. A deal was reached and the result was that he could go back to his village and live in peace

So here was a man who had received military training from the Italians (including military intelligence), and who had had administrative experience (as the deputy administrator of Kassala) facing down a bully and getting peace with honor on his terms (after challenging the British administrators.)  He was obviously a man ready for what Eritrea’s history would bring his way.

It is 1960.  Pro-independence Eritrean parliamentarians who had reluctantly agreed to a federal arrangement with Ethiopia because the alternative (annexation by Ethiopia) was far worse, are, with a broken heart, witnessing their nightmares come true: Ethiopia is slowly annexing Eritrea, with the eager co-operation of their pro-union compatriots.

The process is incremental and involved many violations, but the two most profound steps were the lowering of the blue background/green-olive-branches Eritrean flag (which, incidentally, is the only flag that Eritreans actually voted on) and the de-officiating of Tigrigna and Arabic languages, in favor of Amharic.

The exiled parliamentarians (Idris Mohammed Adem, etc) and Diaspora students and professionals (Idris Gelawdios, Taha Mohammed Noor, etc) confer in revolutionary Cairo, Egypt to discuss next steps.  They are skeptical of the Eritrean Liberation Movement (Haraka) because it was proposing civil disobedience to rally the Eritrean people—and those attending the meeting in Cairo had come to learn what peaceful resistance had so far yielded from the government of Haile Selasse: nothing. The more Eritrean students and professionals protested and demonstrated, the more steps that the Ethiopian government took to render the Eritrean federation null and void.   So, they resolved that armed struggle was the only solution.  And they had only one man in mind to lead the revolution: Hamed Idris Awate.

THE EVE OF SEPTEMBER

Hamed Idris Awate agreed to the proposition but only after getting a commitment from the group that he would be provided with the materials needed to initiate the campaign.  When word got out that Hamed Idris Awate was about to wage a campaign, Ethiopian authorities—who had received the profile of the man from British authorities—made several attempts to take pre-emptive action and arrest him or kill him.  When that did not work, they sent a delegation of Eritreans to approach him and to demand that he lay down his guns.  Awate gave a condition for lowering his arms: that Ethiopia lower its flag and raise up the Eritrean flag.

With this response, Awate answers any doubters (including latter day revisionists that are cropping up) that the cause of his uprising was indeed political: to restore the rights of Eritreans. He also answers anyone who might have questions as to who was going to lead the revolution: it was going to be him.

Having received an uncompromising answer, the Ethiopian government resolved to crush the revolution before it could begin.  The place was Mt. Adal and the date was September 1, 1961.  The Eritrean fighters, Awate included, numbered 14.  The Ethiopian imperial army was unknown, but it was common for Ethiopia to use overwhelming force for all its subsequent operations in Eritrea.  There is no reason to doubt that this same strategy was also applied in this case.

Beginning at dawn, the Ethiopians attempted, for seven long hours, to break through and crush Awate and his small force.   When they failed to do so, Awate was able to demonstrate, conclusively, that it was possible to stand up, and defeat, a much larger, and better-equipped force.  Within days, his rag-tag team would double as Eritreans from the Sudanese police forces would join in the resistance.

Awate did not live long to continue leading the revolution—he died within less than a year—but it was this spirit of defiance, and the refusal to be daunted by overwhelming odds, that would become the hallmark of the Eritrean revolution.

September 1 is about standing up against bullies, about setting to correct an injustice with the awareness that the most important question is not: “can I win?”  But “can I live with myself if I don’t?”   This requires character and courage.  Days and calendars don’t have that; people do.  So, when we are marking September 1, we are really celebrating the man, Hamed Idris Awate, and the tens of thousands of Eritreans he inspired to join his revolution.

The Awate Team is a group of individuals who collaborate in preparing editorial contents that mainly appear under the PENCIL signature and other columns that carry the Awate Team signature. It represents the collective team's view.
Previous September 1: It Is About The Man, Not The Date
Next National Unity Requires More Than Mouthing Slogans