Posted on February 10, 2015 by awatestaff in Articles 6 Comments 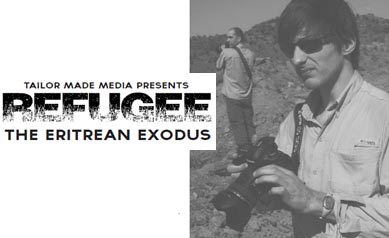 There are plenty of humanitarian issues throughout the world, but what distinguishes the Eritrean refugee crisis is that much of the world is unaware of it. Until now.

Follow Chris Cotter, an American world traveler, as he searches for answers about this mysterious country’s little-reported refugee crisis. Eritrea is a narrow strip of African land that borders the Red Sea and its people are leaving en masse to escape the brutality of Isaias Afwerki, the Eritrean president, who has retained power for over 20 years. The film brings the viewer on a common migration path that many Eritre­ans desperately undertake for the slim hope of freedom and security.

Chris and his crew tour never-before-seen refugee camps in Ethiopia including the desolate and dangerous Afar region. Hear the stories of Eritreans as they depict deplorable treatment in their homeland, the struggle to leave, and a vanishing hope for a better life. Back in Eritrea, they face indefinite military service that serves as slave labor, harsh imprisonment for speaking out, arbitrary killings, and an uncertain future. Some have been ripped from their homes in the middle of the night without cause and have never been heard from again.

Chris also speaks to many experts on the ground, including Amnesty International, Physicians for Human Rights, and the Assistant Secretary of State, Anne Richard. Richard confidently claims that, “Eritrea has one of the most oppressive governments in the world.”

Despite the potential dangers of speaking ill of the regime, the surviving refugees bravely reveal the profound hardships they have endured. As the refugees explain, once they choose to leave, they face being shot at the bor­der, kidnapped for ransom, and even having their organs harvested. Their stories are unimaginable and heart­breaking, yet told with a profound dignity.

The dire situation shocks Chris and his team as their search leads them to Israel where they interview many urban refugees and experts from leading NGOs. Searching to find a reason to hope, they are confronted by angry Israelis who are unsympathetic to the cause, labeling the Eritreans as “job-stealing infiltrators.” The Israeli gov­ernment has cast the refugees off to remote prisons near the Egyptian border.

Refugee challenges the audience to consider how such a large-scale injustice can exist in the 21st century, while the rest of the world remains either unaware or seemingly impotent. As depicted in the film, many Americans have not even heard of the country, let alone the atrocities committed there. Witnessing the refugees’ bare hu­manity makes their sub-animal treatment at the hands of Afwerki that much harder to stomach.

Chris Cotter: Chris owns and operates Tailor Made Media and TribeSound Records where he spends his time producing music and managing film and commercial video projects. He produces for many award winning musical artists and works closely with several large organizations both in the US and abroad. His experience and ambition has led Chris around the world working in the United States, Africa, Europe, Central and South Amer­ica. When Chris isn’t traveling or found in the editing room you’re likely to find him on stage drumming it up with his band WaveRadio.

Scott Miller: Scott has been writing and directing for film and video since 2009. He graduated in 2011 from the University of Pittsburgh with a degree in Film Studies. During his time there he worked on numerous student films that have been featured at various film festivals. He has since been working in Philadelphia on local projects as camera operator and editor while continuously finding time to fine tune his skill on the etch-a-sketch.

Joe Acchione: Joe has been writing, shooting, editing and scoring films and videos for over ten years. While earn­ing his film degree from Emerson College in Boston, MA he took part in long-term studies of film, literature and music throughout Europe and Los Angeles. He has also performed as a lead guitarist on many well-known stages including the Warped Tour, the TLA of Philadelphia and Lollapalooza.
Josh Coyne: Joshua is a nationally aired commercial and music video director who also specializes in high end visual effects, detail oriented editing, and color correction. He earned his BA in cinematography, and soon there­after learned he also excelled in Directing. His broad work experiences are in every aspect of production.

Evan R. Schullery: Evan graduated with a B.S. in Cinema and Photography from Ithaca College in 2003. With a concentration in Screenwriting, his writing experience has been mostly fictional up until this project. He in­terned for the Emmy-winning television show Malcolm in the Middle, assisting writers and helping organize the show’s “bible,” as well as at Martin-Chase Productions where he wrote script coverage. He has written several screenplays that have performed well in contests and has most recently applied his writing skills to music, under the artist name “Skinny Cool Kid.”

Luckily for me, I was born just outside of Philadelphia, Pennsylvania in the United States of America. I spent my childhood as an optimistic, naive kid more interested in playing music than studying geography. Honestly, I didn’t really put much thought into anything or anyone outside of my small bubble. My biggest issue as a child was deciding whether to watch Thundercats or He-Man.

Like most of us born in a truly democratic state, I have taken many of my basic rights and freedoms for grant­ed. It wasn’t until I began traveling outside of the U.S. that I started to understand how vastly different other countries could be. At first, I traveled mostly for the adventure of it, an achievement of some kind, or just out of sheer boredom. I did it because I could. I was hungry to see the world. My world.

It took quite a few trips before the actual world finally came into focus for me. I started to realize that not everyone was as sheltered and spoiled as I was here in the United States. Not every person had the freedom to question authority or to have their vote counted when something needed to be changed. Not every man, woman, or child had a voice. As it turned out, “my world” ended up including other people who were not born as lucky as I was.

I took on this project to tell the stories of people whose cries are falling on deaf ears and not reaching the public eye. These refugees are underdogs born into a severe situation and if things had gone another way, any of us could have been facing similar fates. After visiting the refugee camps and conducting interviews, I now understand that borders may put certain limits on our identity, but they do not need to define the limits of our humanity.

Refugee: The Eritrean Exodus is the story I felt needed to be told. It’s a story of the struggle of humanity and the resilience of mankind. It’s a story of suffering, triumph, bravery, and perseverance. It’s a story that has been unfolding for years, unknown by most of our world. Until now.