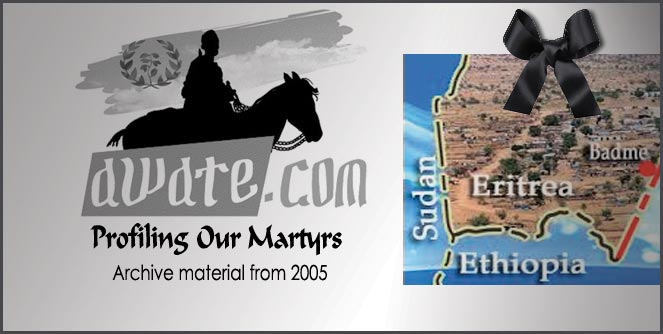 This document was compiled from the Eritrean Government data leaked to awate.com in December 2004. The Awate Team studied the data, organized and analyzed it and then published in on January 16, 2005. We will republish the entire document in five parts. Today we provide you with Part 1. (The Awate Team)

Profiling Our Martyrs
A Statistical Report of Eritrea’s Casualties in the Eritrea-Ethiopia Border War (1998-2000)
By The Awate Team – January 16, 2005

When the mayor of New York City uttered these words on September 11, 2001, he was not addressing the residents of his city (population: 8 million) or his state (population: 19 million) but his country (population: 290 million.)  Three years later, we know the precise number of American casualties on 9/11, which is 2,992.  Although this accounts for one-thousandth of one percent of US population, because life is precious in the US, we know their names, their gender, their ethnicity, their nationality, their religion, their occupation, their age.  We know how many died in which airline, how many died in the towers, how many at the Pentagon.  We know how many were firefighters, how many were police officers and how many were ordinary civilians.  We know the impact of their death: a series of hearings, a restructuring of the US government,  a total change in US foreign policy and US way of life.   To Americans, the deaths—however minuscule percentage-wise—were, indeed, “more than any of us can bear.”

Between 1998-2000, we Eritreans lost, according to the government, 19,000 lives.  That is almost one half of one percent of Eritrea’s population.  Yet, we don’t know who these children of Eritrea were: neither their names, nor their ages, nor their gender, nor how they died. We don’t know what kind of impact, if any, their death is to have on the lives of the living Eritreans or on the policies of their government. In fact, given the government’s habitual politicizing of everything and its tendency to view every subject from the standpoint of “will this information benefit our enemies”, we didn’t even know if the 19,000 that was officially cited on June 20, 2003, was an accurate number.

When we said that the martyrs do not belong to the Eritrean government, we were reminded that they don’t belong to Awate, either.  This rejoinder came from two groups of Eritreans: those who felt that we, without a clear mandate, had no right to publish any of the information, as well as from Eritreans who felt we had no right to censor any of the information. Our objective remains the same: to provide as full accounting as possible, to provide information so we can demand accountability from those responsible for the policies that resulted in this tragedy and, finally, to promote a culture of peace. In the process, we do not want to disclose information that we deem is sensitive, either because it endangers national security or violates social norms or promotes disharmony.  We understand that many of our readers consider our parameters arbitrary but we are sticking by our decision and we will let history judge whether our decision is right or wrong.

The database includes scores of fields that can be reproduced either in statistical form,  a narrative or a simple list.  When producing the Martyr’s Album, we decided to include only information we believed would suffice to identify the individual.  For cultural and privacy considerations, we chose not to disclose the mother’s name and maternal grandfathers, place of origin, etc.

A similar restraint is shown on the fields that can be produced in statistical format. Below is a list of the fields we have selected for this report, a list we have either deferred or totally abstained from and our explanation for each decision:

With each report, we will begin by providing an explanation of the terminologies used and, wherever possible, additional information to give the statistics report some context.

Context:  Excluding the lives of civilians, the War of Independence is reported to have claimed the lives of 65,000 Eritrean combatants.  The number of Eritreans who were martyred between 1991-1997, unannounced thus far, is provided by the same database: it is 466.

The frequency—and the intensity—of the following question surprised us: how many died in the Eritrea-Ethiopia border war of 1998-2000?   We were surprised that many thought that the number is significantly higher than 19,000.  Reflecting on the matter, we understand why.  While both Eritrea and Ethiopia refused to disclose the number of their dead, the Western media had been speculating that those killed in the war that was described as a “World War I” type of confrontation,  or “trench war” or an “infantry war” between two well-armed, well-trained and experienced sides to number between 70,000 – 120,000.   Similarly, after each conflict, both governments, while describing their losses as miraculously low, had painted a grim picture of the loss of the other.  If one were to believe both reports, one would conclude that a quarter of a million people perished in the Eritrea-Ethiopia wars.

Given the size of our population, we think the loss of 1,000 would be heartbreaking; 5,000 would be catastrophic; 10,000 would be stunning and anything more would be unspeakably tragic.  How many were martyred?  That is a hard question to answer because people are still dying.  In an environment of war, people just don’t die in the frontlines; they die from wounds sustained, they die from illness, they die from accidents, they die from self-inflicted wounds.   It is worth noting that in January 2004, long after the government announced “the number”, there were still Eritreans dying.

The following is the number of martyrs, as of a specific milestone:

So where did the “19,000” come from?  Apparently, it includes all those who have been documented as martyred and all those that the government expects to be martyred—either because they are missing in action (MIAs) or because it has calculated that they won’t recover from their war wounds.  Experts in warfare generally accept a rule of thumb that there are four wounded for every death.

Another possibility (actually probability) is that the database is incomplete. The numbers we produce here are a faithful report of the database that we obtained; we have done so even when there may have been cases of duplicate entries or data entry errors. In the Martyr’s Album section, we provided minimal information because the purpose was to honor our martyrs—and not analyze or study them.  We sorted it—not by name, not by “Adi”—but by year and “zuria” because we wanted you to see the whole while looking for an individual loved one.