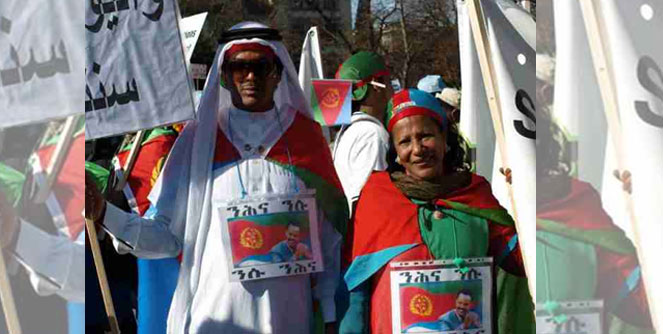 I read your article, “Building Democracy in Eritrea” which appeared on Awate.com, on April 4/28/2019, with great interest. Good to see you enter the melee, and good to see your contribution, though I must say I’m not satisfied with the content of your article. I feel you scribbled it away as a gesture of goodwill to satisfy the curiosity of people (እንታይ እዮም እዚኦም ከ ሕጂ ዝርብሹኒ ዝዓይነቱ)…Meaning, you could have submitted a well-developed, a somewhat detailed and a suggestive one, something that could have served as a supportive reference.

Sadly, your article fell short of my expectation. The bulk of the article regurgitates what has been said by many ex-EPLF leaders and, particularly, by Ambassador Andeberhan W/Giorgis, in his book, ERITREA AT CROSSROADS, as far as why the EPLF failed to manage the post-independence era.

I should not hide the fact that I’m becoming more critical of ex-EPLF leaders who often make excuses and line up with ordinary folks, like me, to criticize PIA,  as if they were not active engineers of the armed-struggle era. We ‘thought’ we sent you to the legislative body of the organization to do what legislators do, to take stock of the official duties for which you took an oath, to safeguard the institutions of the revolution which should have served as a mechanism for smooth landing to post-independence era.

Turns out, it has now become a familiar pattern to see every senior ex-EPLF 0fficial who fell out of favor with PIA to line up with disgruntled or disillusioned ordinary people and lower ranks of the organization to lodge complaints against PIA.

For God sake, you were the head of EPLF’s theoretical and ideological department; you were among the few who had to engineer the ideological path that the EPLF took, from a very  hardline leftist to moderate leftist, and finally, to an organization that had openly accepted the failures of leftist leanings and embarked on retooling itself to introduce democratic virtues, something that could fall within the social democrat camp of the world.

In post-independence Eritrea, you served as Eritrea’s first Ambassador to Ethiopia, and then as Eritrea’s Ambassador to the UN. So, you can’t just soothe us by saying things folks like me say. Readers are my witness that I have been saying what you have just said, in defense of the EPLF, i.e, things like, “We were at war, EPLF should be seen within its historical context, etc., etc”. I’m looking for someone  taking a personal responsibility, not just throwing everything at PIA, because, folks like you, literally, built the EPLF and led it through the turbulent past. That is if you chose to indulge discussing that aspect of our history.

However, if you are not ready to accept failure on your part, then proceed directly to what should be done now. Otherwise, portraying yourself as someone who had no part in engineering the machinations of the EPPLF is simply disingenuous. If you are to absolve yourself from what you consider system-failures of the EPLF design, then give ALL credits of the success the EPLF is known for to PIA.

In that sense, during the armed struggle,  I looked up to you and your peers and drew pride from what you did and boldened my confidence in what you did. Then, however, I got dismayed when you joined the UN and saw you, in some cases, making statements that blamed Eritrea for the “no war, no peace” situation that was in fact created by the TPLF-led government of Ethiopia. I can reason out that you were a senior employee of the dysfunctional UN that abdicated its responsibilities and, worse, imposed unjust sanctions on Eritrea. I can understand that you had to choose a career and money over the truth. We are only humans, and we are all capable of dispensing flaws. Also, you deserved to catch up with private life after spending years of your primetime for the independence of Eritrea. I get that.

However, the comment you made in the meeting that was arranged by the office of the PM of Ethiopia to appraise his one-year accomplishments infuriated me. You said to the effect that PIA and Dr. Abiy were designing the peace rapprochement to exclude the TPLF or to hurt the Tigray region. I thought that was irresponsible and I commented on it on my FB account.

I suggest you should have blamed the TPLF for failing to grasp the situation and take a strategic decision to solve its problems with Eritrea based on the agreements its leader and the former  PM of Ethiopia had signed in regard to the settlement of the border conflict between Eritrea and Ethiopia. You should have called a spade a spade. Instead, you chose to politicize things by insinuating that the peace rapprochement between Eritrea and Ethiopia wasn’t institutionalized, that it was a ‘peace’ between the leaders of the two countries, that it was meant to hurt the people of Tigray, etc. I feel that coming from you was indeed irresponsible.

Coming to this article, the only “new thing” I could discern you are coming up with is calling for a national conference. It is good that the idea is coming from you, too. However, that idea is not new to contemporary Eritrean discourse. For one, I previously (when I was semi-opposition) called for a united national front (voice). However, reading the current developments, I called upon the opposition and the Eritrean government to consider the idea of working for a truly national reconciliation process. It is in that vein that I called upon the opposition to come up with a realistic proposal that could entice the government to take it seriously, and for the government to consider a serious national dialogue. It is crucial that Eritrea uses its maximum potential at this critical moment of our history.

Neither side has shown signs of rethinking. I know I’m a no-entity person for both sides; I don’t expect them to listen up to me, but that is a national call for me to make.

Here, you should have bolstered (I hope you will do so in the future) this idea by presenting plausible action plan that would include discussing the following important points:

The pressing task of the moment: calling for a broad national dialogue/conference

1.  What is the nature of the national conference
2. Who authors and manages it
3. What are the envisioned end-results
4. How is the transitional politics that would lead to the envisioned chapter handled ( the transition from PFDJ-led Eritrea to an elected government)

As far as the mere calling for a national conference is concerned,  any layman person can say it in a cafe, enjoying his/her espresso. Such a loaded-but-muted call is bereft of applicability without a thoroughly thought of action plan.

The second weak point of your article is that you fell for the fancy tune of ‘building democracy’ in Eritrea, because, any sensible person should realize that the immediate question should be: how do we build a climate where the idea of democracy can be discussed without shoutings and exchanging blames, how can a culture of sober deliberations take root.

Democracy needs a fertile ground to blossom. As a prerequisite, it needs a culture that is receptive to the merits of democracy. Therefore, the priority of our time should be leveling the ground for talking democracy. You can’t build something if you don’t have a foundation on which to build it. What is lacking is the basic foundation upon which we can build democracy.

In this regard, the problem with our intellectuals seems to be that they resort to things they are familiar with such as producing researched materials and try to stick them into our situation or, rather, squeeze us into the experiences of others- that is to say- they often try to explain things from theoretical angles, falling short of providing localized guidelines appropriate for our situation. However, that is not entirely their fault. They have lived outside the country for a long period of time, and they may not have access to real-time data in all aspects of our country’s situation. And most of them lack the experience of running institutions, anyway.

You have had chances to run institutions; you have had opportunities to mediate conflicts in developing countries. Therefore, you have a hands-on experience, a rich manual for suggesting concrete steps to be taken in situations such as ours.

The third weakness of your article is that you seem to cling onto the idea that PFDJ must go. I believe the “inclusiveness” you inserted is meant to be understood as “inclusiveness” of ideas and factions within the opposition camp. That makes you one out of many who have made blunders in a bid to eradicate or dismantle the PFDJ. I think the boldest statement should be one that recognizes the PFDJ as an important national front. The new approach should be bold enough to announce that we can’t live forever by excluding one another.

I thank you, sir.