Never Were Never Will Be Bedfellows 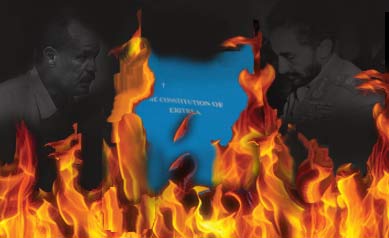 The following comment was posted at Awate Forum by Hayat Adem.

There were plenty, more dramatic, and more shocking tests that faded away without angering the Eritrean public. The 1997 constitution was never part of the Eritrean value and culture. Shooting kids from the back for the crime of trying to cross the border is incompatible with the Eritrean culture. It didn’t send shock waves. Punishing a dead body of a colleague and comrade by denying his remains a two-meter square resting space for undisclosed crime is unusual in the Eritrean culture. Keeping heroes and heroines in a remote, harsh area without a court decision, for years, and letting them perish one by one, is shocking.

Learning about the sea-death of hundreds of youth including a birthing mother should have been a source of awe and hearing for the very government that was supposed to lead public mourning of the loss, with the national flag flying at half mast. Denying to recognize the loss of the victims as an Eritrean loss and allowing them proper funeral should have been a source for a public uproar. Compared to these events, the constitution is nothing near that to serve as a rallying gravity of public anger and fury.

I think the logic of criticizing the opposition for not using the unborn, or murdered, constitution as a rallying document is as twisted as the road in the photo of this article’s entry. The opposition was never allowed to be part of any political process in Eritrea from the beginning. It was not even allowed to organize support for the referendum for independence. EPLF/ PFDJ never recognized the opposition in words or/and actions as stakeholders in the Eritrean affairs. It never invited it to be part of Eritrea.

Usually, ruling parties invite the opposition out of magnanimity or farsightedness to get on board and to join in the process. That was never the case here. EPLF must be the meanest liberator ever seen in some aspects. What happened in Eritrea was totally the opposite: the opposition read the independence euphoria, and intoxication of the people and it didn’t want to stand on the way. Some of its members offered to mobilize their supports for independence in the referendum voting, but were rejected. Some of them had demobilized their armed wings and cadres to give a chance.

The opposition demonstrated magnanimity and left the entire show to the EPLF, in the early years of independence, it swallowed the patience pills, and went on hibernation and exile to let the people take their moment of enjoying the independence. EPLF was spending this independence mood so crazily like an infinite resource. Supporters were cheering up every move of the Front just as crazily through all the jumpy, bumpy and sleepy road and journey.

First it was visibly and recklessly jumpy. It was torching fires here and there: insulting UN, insulting OAU, elbowing the Sudan, punching Yemen, and squashing Djibouti, jumping on Ethiopia’s throat…and the party was being cheered up for all that: “Go EPLF, Go Isaias, Go Isaias!”

The opposition was trying to say something, unfortunately nobody was willing to listen. If you weren’t hearing the opposition then, it means you were not listening. And that was exactly what was wrong with the Isaiasim wagon. Everyone cheers and claps and nobody listens.

Then came the bumpy phase: EPLF/PFDJ came out weak and deflated from the war with Ethiopia, it grew at odds with itself and went on a massive trimming and shedding action, it fell out of grace with the West and the US, UNMEE was kicked out, isolation and sanction caught up. Then the roaring of the lioness evaporated and the selaHtawi loneliness crept in. The talk of Mekhete was louder than any talk about the constitution (unborn or murdered). And that was what Isiasism looked like as the constitution, which was written to play a role in that Isaiasim, was wearing layers of dust because the author had better ways to advance Isaiasism. It is like an army commander who chose to use air raid rather than infantry in a certain theater. Can we blame it on the opposition, blame it for not applauding and defending the book of Isaiasim when its creator trashed it to the dust bin with all its accumulated dust? Hell, No! The opposition should write its own rallying book. Remember, it ceased to be good enough for its author let alone for the opposition which demanded greater inclusiveness and broader platform.

Then came the sleepy phase: we are living it!

This phase is centrally characterized as “nothing happens until something happens.” Citizens can read the situation for what it is. That is why they are making tough decisions at family level. The opposition camp clearly knows what is needed. But many of the resources and instruments are still with the mafia group, aka the PFDJ system, aka Isaisism. The opposition should be hard pressed to come up with innovations for saving the nation from slipping into a civil war,. So far there are enough blame around to share–for the many indecision and inaction that brought so much national paralysis, for not responding decisively to the national situation. But not acting to undo the burial and save this constitution, should not be one of them. You can’t blame the opposition for failing to defend the Isaias book which is abandoned by himself; it should not be missed by any of us.

The recent utterances of Isaias regarding that document signifies nothing except that he has grown derelict, that now he can’t make any move except re-appearing as an old man staring at his shadow from the ceiling light-bulb, and disliking it, and then switching a seat to only see the same shadow in different shape and size.