Negarit 58: A Goatskin Filled With Butter 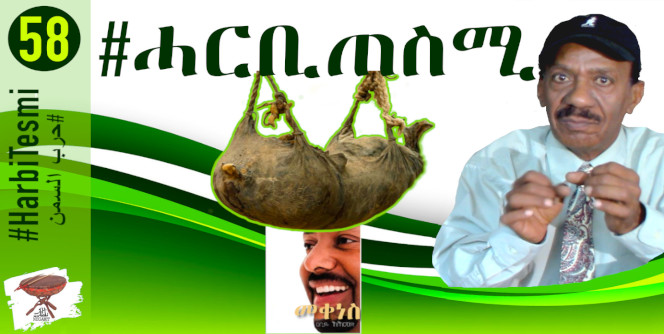 In this episode, the topics are 1) Tilahun Gessese’s old song, 2) Harbi Tesmi, a goatsking filled with butter, and 3) The offsprings of Muwaya, the founder of the Ummayad dynasty.

There is an old song by Tilahun Gessese, “Asmera Addis Ababa, shi motto kilometer”. That was a long time ago. The 1100 kms highway corridor has been the seat of power for centuries, and a source of destruction and mayhem—warlords, kings and ambitious rebels competing violently, invading villages of peaceful communities, and shedding blood endlessly. As a result, the region remained isolated and left far behind many other countries in the world. I said many times, if Ethiopians complain about being poor, illiterate and destitute, they do not have to hold God responsible. It’s their own work.

A country endowed with diverse ecology, forests, deserts, and abundant water resources, and a huge population, should not be poor.

They say, in the 1960s, Ethiopia was at par with South Korea, now Ethiopia cannot look to South Korea at eye-level, it has to stretch its neck high to look at it. Even stretching its neck high to see South Korea is not enough, it is far, far above the clouds. And what were the Ethiopians doing during the last fifty years? Build and destroy. With intermittent periods of peace, that soon bores them and they go back to war.

That is why I wish Ethiopia to prosper, to shun war for good. A prosperous Ethiopia Is good for Eritrea before it is for Ethiopia.

But now we have reached the era of Abiy Ahmed, the leader who promotes addition and hates subtraction. However, I have a misgiving: Abiy Ahmed has taken Isaias’ delegating him to lead Eritrea very seriously. He can’t be that naïve! But some friends tell me, “Abiy is smart, he is luring Isaias gently to trap him, to make him accept peace and change his behavior.” If that is the case, and if succeeds, I will start a campaign to give Abiy the crown of Solomon, the original Solomon of Israel.

But as an activist I only consider what I see and hear; the above view of luring Isaias to make peace, is speculation and I do not depend on speculations to make up my mind–though I hope the explanation turns out to be true. Only then would I consider it, and I will admit, retroactively, that I was wrong all along. Decades of experience and observation of Isaias’s history, character and attitude is not something you can push to the side and ignore. Twenty eight years of brutality and recklessness is enough for anyone to judge. That shapes my view about Isaias.

In the last few days I heard, of course, from Abiy, not Isaias, that the Eritrean dictator yearns to promenade in the streets of Mekelle, the capital city of his archenemies the Weyane! That is fine. Peace is so precious we have to take his intention seriously—and I do not think Abiy will claim that if Isaias hasn’t asked him to mediate with “Weyane”. Bon Voyage, if he is going there with a clean heart, not with tricks, not with calculated traps and mischief, not against the interest of Eritreans, and then, of the Ethiopians. Just change course, dammit. Change course and embrace peace for a change, and then, maybe, just maybe, you can learn some wisdom and stop oppressing the supposedly free Eritreans. And by God, maybe the hearts of oppressed Eritreans will soften and they may consider securing a safe, dignified, and peaceful exit for Isaias provided he doesn’t leave time-bombs behind, or lackeys to continue what he considers his legacy. If he just leaves Eritreans alone, they will come to an understanding. If he just lays the groundwork for a smooth transition and  disbands his oppressive party—and continue to live in peace wherever he chooses. He can still make changes to save Eritrea of unwanted bloodshed and save himself and his family. It takes courage and guts and if he used a little of the boldness with which he have been oppressing Eritreans for decades. Can he do it? And if he can, would he do it?

For Abiy, we are watching him with a lot of skepticism and suspicion—and since we are not gods and we cannot read his mind, because he didn’t communicate anything noble towards the oppressed Eritreans. When it comes to Eritreans, his Medemer (addition) philosophy magically turns into Meqenes (subtraction). How can we trust him?

I feel sorry because I have a long list of things I admired in him; and I cannot express them loudly because I am mad at him. He messed up the main issue that I care about most—my priority and that of my oppressed compatriots. As long as he does not care for the oppressed Eritrea, I do not care for him or his Medemer—by the way, it’s common that politicians say stuff to appease or to rile up their populist constituency.

“If one follows a donkey, he might not learn braying, but he may learn far….”. It’s an Eritrean proverb. Abiy has been with Isaias for too long. He might have picked some of his attitudes and put-downs. Isaias is known for saying irritating things that do not add anything to what he says, but spoils it. For instance, he popularized the famous “hamburger eaters” to discredit his exiled opposition. He uses cheap, unrefined languages to appease his low conscience constituency.

Why would Abiy say stuff like, “Whiskey eyeTetah”, etc? It’s cheap. I do not think that language is fit for  leader of 100 million people. You could blame me because I might have done that, but again, another Tigrinya proverb goes, “Qeshi zblo gber, Qeshi zgebro aytgber” Do what the priest preaches not what he does”. So, consider me a qeshi of sorts, I am neither a president or a prime minister.

On the Nile, “don’t let them catch you sweating”—Egyptian politicians are using the Nile to agitate the people—there is enough water to go around, enough for Sudan, Egypt, and Ethiopia, which has full rights to build the damn dam—just finish it and leave the Egyptian rulers to his own devices.

Incidentally, Eritreans are thinking of digging a hole underground to Lake Tana, and without the Ethiopians know, the pipe will pop under the surface of Tana. From there on, gravity will do its work and the other end will gush water in desert of Rahya-Abbay, Eritrea. Then people will be amazed when the desert turns into a lush green landscape and ask, “where are the Eritreans getting the water from?” We will simply tell them, “God willed it and we have water.”

In fact I shouldn’t have disclosed that; it’s a national security issue. Pretend you didn’t hear it.

Once upon a time a street vendor showed up at the house of a newly wed couple. The wife was so beautiful and he looked at her with gaping mouth and popping eyes. He said to himself, “I never saw such a beautiful wife.” The devil played with his mind and he was determined to have the woman. A few days later he turned into the house when the streets were empty and found the husband in front of his house. He offered to sell him a goatskin full of pure butter for a cheap price. The husband didn’t believe the meagre price.

The man said he can taste the butter and they went inside the house where he told the husband to hold the goatskin while he untied the goatskin. While the husband held the goatskin, the vendor walked into bedroom where the young wife was and jumped on her. She couldn’t scream loudly because she was afraid of the embarrassment that would cause in the neighborhood. But the husband kept holding the goatskin and warning the attacker “I am telling you to stop. Stop”. But the man continued fondling the distressed wife. The cowardly husband kept threatening: “come out here and hold the goatskin and I will teach you a lesson.” The wife pleaded with her husband to help her free herself from the man who was raping her, but the husband could only scream, “if I was not afraid the butter will spill, I would have come and kicked you out.” He kept saying that until the seller was done and walked away through the door and left. Then the sobbing wife came and told him, you think the butter is more valuable than my honor and yours? She kicked the goatskin and spilled it on the floor. This is what you could have done.

We have many Eritreans holding goatskins and at the same time watching their country being raped. They are afraid to kick the goatskin and spill the butter, and then rush to help their distressed country.

The Harbi holders are many—you see them endlessly apologizing for the regime, blaming the its victims for becoming victims. They always protect the regime, apologize for its violations, and justify every harm it inflicts on the people. Such individuals with dead-consciens have always been with us. Generations of Eritreans saw them in every decade since a century or more. And now we see them doing the only thing they are capable of doing: empowering the oppressor and engaging in cheap propaganda bereft of any principle, honor, or morale courage. Don’t call them unprincipled, spies, or hypocrites. From now on, their identification is #HarbiTesmi, the goatskin of butter. He or she is Harbi Tesmi and that will save us the heartburn associated with describing them with so many words. Remember it. #HarbiTesmi.

Deqi Muawya….oh, it’s too long already, I will postpone that segment for the next time. But we have Deqi Muwaya in Eritrea … Muawya is from Quraish tribe, a relative of Prophet Mohammed and the fifth Caliph of Islam who started the Ummayad dynasty… lets end this episode here…