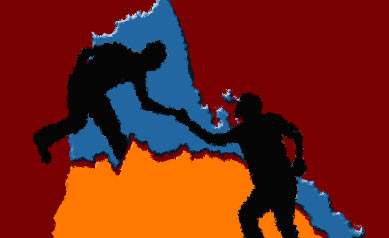 Have you ever been to Sudan and ordered “Fool” with “jibnna”, “taemmia”, double sesame seed oil and eggs? If you have not, please do. I recommend it. You will obtain your daily dose of the essential food types in one sitting. But it has its drawback: it will make you sluggish and sleepy especially if you have it for lunch and before attending classes. This reminds me of how a friend described the experience of this phenomenon: “hisset hissab ende enta qisset mesletteni.” — I mistook the math lecture for a story.

If you eat this wholesome delicious dish, while it nourishes your body, it has the “dietary” hazard mentioned above. It is up to you to consume it moderately and wash it with “haja baarda,” that is to say common sense is your friend when consuming this dish. If you are a penniless students, like I was, and eating “Fool” induces a crippling fear of snoozing during classes, you will be starving.

The notion of receiving help from Ethiopia conjures images of horror, redrawing of our borders, realigning of Assab or to put it in the words of my teenage friend, those who oppose the notion are, “hisset hisab ende enta gisset meslettom.”

War is destructive as we can all concur and both the people of Eritrea and Ethiopia have seen more than their share of carnage conducted by their leaders in their good names and the war should have ended by 1991. It was reignited to claim lives yet again. The proverbial mighty pen succumbed to thuggish barrel of the gun, negotiation was defeated by bullying and arrogance, and so the war won and everyone else lost. The aftermath of the war was especially devastating for Eritrea, a nation that boasted rising from the ashes, it was unable to even arouse the vibrant national fire that Eritreans are known for. Along the people, the heroism and volition to fight for the country has been trashed. Eritrea continued its enduring turgid legacy, refused the myriad opportunities it was offered to her to reform, learn and move on. It was even so arrogant to dust itself off, in the contrary, it rolled itself into the dust.

A quarter of a century after its emergence as an impendent state, and 15 years after the last war ended, Eritrea under its homegrown dictator is in its worst shape in every aspect, and if things do not change soon, the ashes from which it has a chance to rise will be hard to collect. It was Idris Jemie, a Sudanese poet who once, describing his bad fortune, said the following:

My luck is very fine and someone scattered it over a thorny field
They ordered bare-footed people to collect it in a windy day
It became an impossible task to accomplish
So they called it a day
This is a human being who is being punished by the Almighty
How can you make him happy?

At a time when almost an entire village has been emptied from its best, brightest and youngest members, who hazard the treacherous seas and deserts, risking organ harvesting, at a time when the civilized nations like USA are grappling and agonizing how to control arms, while Eritrea is shrewdly arming its citizens involuntarily, a time when the people are at the cusp of giving up on Eritrea, the matter of PFDJ vs. the Eritrean people is very urgent. The longer PFDJ’s unfettered and calculated damage to the fabrics of the society stays, the more the ashes become like that of the poet: scattered over a thorny field and our bared footed population will be unable to collect it in the windy days.

Ethiopia is disrespecting both Eritreans and the international community by refusing to withdraw from sovereign Eritrean land, this a glaring fact. However, it has nothing to do with what the PFDJ has decided to do with the 99.99% of the population and the land under its control. It hired Ethiopian mercenaries, the TPDM, to round-up and abuse Eritreans in their cities, in their homes, in their land, where their blood has been spilled. PFDJ has established a mafia government whose litany of crimes against the people is fit for many books.

The complex relationship between the two peoples has been there from time immemorial and it will be there for infinity. We have our interests to look after and they have theirs to shepherd, a symbiotic relationship that can be carefully and sagaciously manipulated to help both peoples accomplish their dreams. The Eritrean people are in need of an ally to lend them a hand and to receive help. And who better to be an ally than Ethiopia? It is not perfect, we cannot custom create an ally we want, but we can do with what we have. Ethiopia, right now, is where most of our people are flocking to, where they feel safe from PFDJ’s suffocating and lethal grip. It is the right place for the opposition to be. I have this to say to those who are apprehensive of the invasion of the “Habesha State” to “Habeshasize” Eritrea: It will not happen, even Ethiopia cannot “Habeshasize” itself. If it tries to do so there will not be country called Ethiopia.

Eritea needs to make a decision and soon, that is not only accepting its highly diverse nature but also living it. The opportunity for Eritrean “Justice Demanders” to harness the Ethiopian help that is available but needs to be earned by showing a united opposition will not last forever. This also has been muddied by the department of fear mongering.

There is confusion about the elusive change from within. What does it mean to say change must come from within? To some, it is for the criminal PFDJ to weigh its options and make some amends to make life easier for the people so the exodus can stop, and with it, the future of the country will be salvageable. This is impossible as gauged by the rhetoric of PFDJ and its track record. The other option is for the “Forto” kind of coup by good people to hand power to its rightful owners, the people. This is a possibility, but it will be slow and the country may become unsalvageable by the time they seize power. The fastest and equally safe means is for the opposition to laser focus on the removal of PFDJ and suspend all its secondary political agendas and unite under one banner and establish a viable alternative to PFDJ that can entice Ethiopia to irresistibly salivate to support them militarily without Ethiopia directly invading or perceived to be invading a sovereign nation that will be bad for Eritrea, bad for the region and bad for Ethiopia.

The dangers and unpredictability of war is obvious, and is not different if some PFDJ groups conduct a coup. The puritan myth of going it alone is toxic as nothing can be done alone. The successful artist had a benefactor, the accomplish writer had a master mentor and the successful carpenter had an apprentice to refine his craft. And that is how the Ghedli did it to successfully remove the Dergi

Just like the wholesome “Fool”, the help from Ethiopia requires common sense and right timing to make utmost and safe use of Ethiopia’s untapped but available help for the opposition.