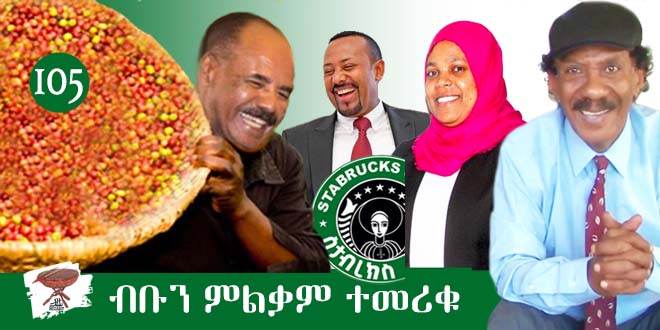 On Negarit 104 I talked about vowels and consonants and why Tigrinya speakers add a “i” vowel to many words like Oklandi, Taxi, Hollandi, etc. A commentator (HTT) explained the reason: it has to do with the word construction and combinations of vowels and consonants. I found his explanation palatable and that is why I am appealing to my audiences who can add value to what I present by participating in the content creation for Negarit. A 500-600-word content on the subjects they know could make Negarit a truly ‘by and from’ the audience.

As you can imagine, producing Negarit episodes (which are presented in bullet points) is time consuming and involves researching the topics, correction, or adding to what I already know. It’s not easy. So, please help me enrich the topics. And thank you in advance. Now let’s proceed to the next segment: Coffee.

It’s widely believed that the origin of Coffee is in the region known as the Kaffa, a province during the Haile Selassie era. So, it’s around the Jimma area (Jimma Aba Jiffar was a famous king of the region during the era of king Menelik; hopefully that will be a topic for another time). Arab traders took coffee out of the Jimma area to the Yemeni port of Mekha’e (Moka) which was a thriving port in the past. Turks picked the name and pronounced it Kahva (after the Arabic Kahwa). It’s widely claimed that that the Arabic Kahwa is a corruption of Kaffa. Later on, from Yemen, Coffee was introduced to the Italian city state of Venice which was an important trading port and home of the famous Italian traveler, Marco Polo, who travelled on the ancient Silk Road and brought the Chinese noodles that the Italians developed into Spaghetti and pasta. From Venice, coffee spread to Europe and beyond.

In modern times, the Italians perfected the coffee machine like Gaggia and Moka coffee-makers named after the Yemeni port of Moka. Arabica is the most expensive type of coffee beans; originally it grew in Kaffa. But today, Ethiopia production of Arabica is overshadowed by other countries that produce it in greater volumes. Now let’s see the origin of our word for tomatoes.

There is no Tigrinya speaker who has not heard ‘TsebHi-Abun’ for tomatoes. The origin of the word is the Italian word Pomodoro—did we know tomatoes before the Italian colonized us? I doubt it. And that could be why they call it TsebHi-Abun—I think the Italians introduced it to our region. Abun means pope, maybe the Italians said it was what the pope eats. Thus, Tsebhi-Abun, the stew of the pope of the Vatican. So, to those who insist on calling it Tsebhi Abun, I ask: when was the last time (or ever) you went to a shop and asked for a kilo of TsebHi-Abun? Never. The word is dead, and I suggest you settle on Komidere, Komaderre, komodoro, Tematim, Tematm, etc.

The benefit of tomato is limited to making a stew thicker instead of watery. Ethiopians, particularly the Amhara, rarely use Tomatoes; in Eritrea, you cannot have a good stew without it. But if you closed your eyes and tasted tomatoes, you wouldn’t know what it is because it has a neutral taste unlike many other vegetables and fruits. Tomatoes are tasteless and to me, useless—it’s 95% water and the other 5% of what it contains is available in other stable foods. Also, tomatoes are not common in the Eritrean Lowland cuisine though it’s popular in cities.

Tomatoes are classified as fruits, not a vegetable, and TsebHi-Abun is mental gymnastics, like “sne” a prefix that we tend to add to many words—sne-history, sne-Tbeb, and sne-anything. It’s just redundant like “Deqi”: deqi-tebAetyo (males), deqi-ansteyo (females). It’s as useless as tomatoes—if you were cooking and a spoon fell inside the pan and it remained there until you finished cooking, the spoon will not add or decrease anything to the taste of your food. Are men children of males or females only? Aren’t they both children of both genders? Then, why do we say children of females when referring to women, and children of males when referring to men? I suggest we get rid of the deqi (children of) and say tabaetyo (men) and ansteyoo (women), without the redundant prefix that doesn’t add anything. Back to food, let’s see the origin of some food items and plants.

Whenever you eat potatoes and corn, remember the native Americans, Incas and others. Bananas, mangoes, papaya, and many others tropical fruits are originally from southeast Asia. Belles (the prickly pear) originated in central America and was introduced to Eritrea via India. I think it was the Italians who brought it after a severe famine hit Eritrea. In Ethiopia, the Eucalyptus tree was brought from Australia during Menelik’s reign, now it’s all over the place one would think it’s an indigenous tree. In many parts of Eritrea, people use the essential spices without thinking of their origin—it was introduced to our region by Banyan Indians, just like the Ejje-Tebab (jodhpur, salwar kemees) which they first introduced to king Tedros. The Jodhpur was an Indian horse riding and polo rider’s attire, but later on horse-riders all over the world adopted it, so did Hitler (followed by Mussolini, followed by Anwar Sadat—dictators like it). Now it is widely adopted as a national dress in the Abyssinian region. At first, Tedros thought it was meant only for royals; the commoners had to do with their ancient wrap-around body-covers—and textile was not easily available (or affordable). It was only after the industrial revolution that textiles became affordable. So was purple which was limited to the use of kings and their inner circles. At one time the so-called “Solomonic kings” punished people who wore purple colored cloths. These kings also had an aversion to shoes. I believe it was during the Napier expedition that the English took two Tigrayan brothers to India for education. One of them became an engineer and worked in projects in places as far as Burma. The other brother returned home and visited Yohannes wearing a shoe. But they admonished the “Europeanized” man for walking in the presence of the king in shoes. Yohannes didn’t wear shoes like everybody else in the region. A man should walk over thorns and deal with it, not act “womanly”! That was the wisdom. But they didn’t provide shoes for the women either! Nowlet’s return to Jimma, the city of Mufrihat Kamil Ahmed

Everybody living in well to do countries knows Starbucks coffee; and many people in the Horn of Africa know Mufrihat Kamil, the Ethiopian minister of peace. She was born, raised and studied in Jimma. In a recent speech, she diplomatically criticized the zero-sum game that the political elite are engaged in.

So far, she has been the voice of reason where reason and wisdom are in short supply among Ethiopian leaders (including Eritrean leaders). Would they listen to her, or, they will continue with the usual deqi-TebaEtyo (children of Males) attitude? We will see. But the elite who nowadays are acting like street mobs all over the Internet must heed her call and support it.

Jimma, the origin of coffee doesn’t earn a fraction of what Nestle, or Starbucks earn from Coffee. Just after the Baddmme war, some Ethiopians launched an excellent satirical website called Seleda. Until it died many years ago, it displayed a clever emblem imitating the Starbucks logo–Starbucks wouldn’t be around if not for Jimma Coffee. The logo, Jimma Coffee, was an excellent business proposal though I doubt if they saw it that way. Years later, an Ethiopian business called Kaldi’s, imitated the Starbuck business model. It is probably named after the shepherd boy, Khaldi, who according to legend (there are several such legendary stories) saw his goats get high and hyper-active after chewing some coffee beans. I am not sure if the Kaldis’ brand is inspired by the legend or it is simply the owner’s name. But according to the chain’s website, there are 16 Kaldis’ coffee shops in Addis Ababa. That project is what I consider claiming what’s yours. The Kaldi’s experience is one of success that should be emulated.

Last week Isaias Afwerki landed in Jimma (he was well-dressed, in case you are wondering). And he used the usual UAE neighborhood plane (after the popular English “neighborhood bicycle”) that the kefeel (sponsor) sends to all his proteges around the Middle East. You see that plane in Eritrea, in Yemen, in Libya and other places where the UAE is involved. Isaias landed in Jimma and at once Abiy took him to a coffee plantation for a quick training on coffee picking. Abiy graded his skills with ‘A’, and he graduated with distinction. Then he took Isaias to every project that the late Meles Zenawi initiated and executed, even to the Nile Dam that Isaias used to call “white elephant project.” Abiy took him to industrial parks, roads, dams, and a vehicle assembly/factory—all built during the era of Meles Zenawi—but since Abiy changed the names of several of them, he can claim them as his achievements. However, he has nothing to do with any of the projects that he inaugurates, cuts the ribbon for, etc., surrounded by ululations and public cheering: Aby! Abiy! Abiy, Issu, Issu, Issu. In fact, the only project that Abiy presided over is the Entoto public park and palace renovation—and I doubt if he didn’t inherit the designs and studies from his predecessors—would those who know share some info about that? Until then, there is nothing built in the short era of the glorious Prime Minister Abiy, the seventh king (Ethiopian call him that but I do not know what 7th means.)

Finally, we have arrived at the end of the program and I must respect the closing traditions. I always close my presentation with a positive message of hope. However, I fully understand that hope alone will not suffice unless people work to achieve their goals. Sitting in a corner and praying endlessly will not cut the need to work. Still, a people devoid of hope cannot achieve anything. Hope energizes the mental readiness that drives the physical push. Do Eritreans have what it takes to achieve their dreams of peace, stability and freedom? Yes. People can ask that question as many times as they wish, and the answer will always be a resounding YES. Focus on the hindrance and on what needs to be done. The main problem Eritreans face is the cruel regime and its leaders who always show Eritreans a mean face, who never had good words for the people, but put-downs and undermining their intelligence. It’s the man who betrayed their trust and shattered their dreams. And the rooster’s job is announcing the approach of a new down. Even if it sounded a premature announcement.

NB: this is a rough transcript of Negarit 105 that was delivered in Tigrinya