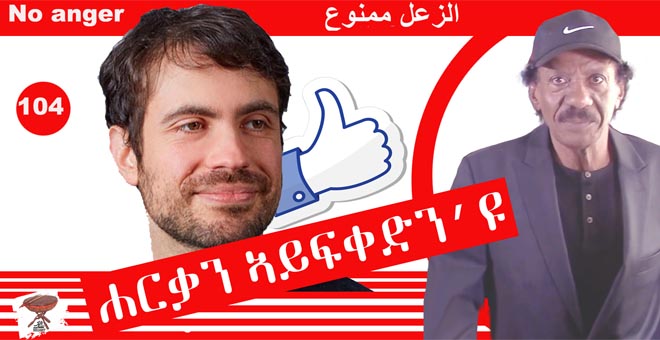 Do you know Justin Rosenstein? He is the engineer who invented the Facebook Like button—if we knew its benefits, we would have used it more often. But I will return to that towards the end. Now let’s move on to languages…

I know, there are some people who get urticaria, a skin rush, whenever the word ‘language’ is mentioned—a Sudanese saying goes: الفي بطنو حرقوص براهو برقص. (anyone who has worms in the stomach, dances involuntarily.) The culprits take the opportunity to unleash their bigotry and hypocrisy. But I will not reward disrupters, let’s we move on…

Fun with languages and accents

I see a few people preoccupied with searching Tigrinya words for every new foreign word they find; it’s often a stretch and I thought of giving them some suggestions that might help them in the search.

Languages have their own rhythms, melodies and tone. For instance, if we try to adopt a word from Japanese or Chinese or Polish, it would not be easily adoptable. But since Tigrinya is a Semitic languages (I am not talking about our Cushitic languages),  we need to use loanwords from Semitic languages because they snuggly fit, seamlessly (Assyrian, Arabic, Hebrew.) We must realize that languages have distinctive phonemes that only native speakers can pronounce—I will explain that later. Now let’s see how Tigrinya is progressing.

The Italians brought us new terminologies, concepts and words– specially nouns. We adopted the Italian words because they sneaked into our languages easily due to the superior resources and cultural advantage that overwhelmed us. For instance we replaced “Bet for CASA” which phonologically became ‘Geza’. Until then we had Bet-Mekhaa, Bet-Asgede, Bet-Giroghis, Bet-Juk, now we have Geza-Kenisha, Geza-Banda, Geza-Tanika, etc. Others we simply accepted because we didn’t have their equivalents or didn’t know before the Italians arrived. The car was alien to us, and we have no choice but to adopt the Italian word for it: Machina. Briefly we tried automobile, as ottonaable; it didn’t work and we adopted  Machina which we adjusted to Mekina in Tigrinya and Mekiinet in Tigrayit. It’s unnatural for our sound system to pronounce  automobile? Then they introduced us to highways—but we had only megedi or gebey for a trail, a road, or a street. The Ethiopian authorities translated highway as awra-godena.

If a tongue is used to specific sounds only, it is difficult to make it say unfamiliar sounds. Recently I  watched a program in which they asked Japanese people to read the word Refrigerator. It was difficult for them because the pattern, the sounds, and its combinations are unusual to the Japanese. It’s so hilarious to watch. They struggled to pronounce it—liflitor, leefeegitol, etc.

Alert: the following is supposed to be an eye-opener and not meant to be taken out of context—if you can take it for what it is, if you are lighthearted, laugh about it. If you wish, blame it on Keren– jokes and humor were our daily stable and I would like to get you to embrace the innocent culture and shed off some of the stiff behaviors that many Eritreans display, J’espère que c’est clair.

Most Eritreans can identify a Saho speaker easily when they speak Arabic, Tigrinya, or Tigrayit, unless they have learned the language adequately, or grew up with it. Saho speakers do not adopt to the Geez Saades vowel; they use the saals instead. For instance, many pronounce “nskha” (You) as “niskha”, Ekhli (Grain) as Eekhli.

I lived in the Senhit region for a year, and having grown up in Keren, I polished my Blin and in no time,  and learned to speak it fairly well. Now it is lost—who do I speak to? Many of my Blin friends reply to me in other languages.

When I was growing up in Keren, the Blin speakers didn’t speak much Tigrinya and Tigrayit as they do now. In those days, we were encouraged to learn Blin because it was so common. Now the Blin speak Tigrinya and Tigrayit as good as, or better than, the native speakers. Only Arhe Hamednaca, the Eritrean Swede politician insists on speaking to me in Blin and I love it. And when I need help, I often go to Kiflemariam Hamde’s website to sooth my nostalgia and check some words. But in the past, the Blin spoke Blina only. They had difficulty pronouncing Tse and Ha—it was TaHaytu not tshaytu. And here is a joke: TeHaytu, ezziaa gedogey tkercheni hala n’eshta zengebilet entehaloki qrechinni (ጠሓይቱ እዚኣ ገዶገይ ትቀርጨኒ ሃላ ንእሽታ ዘንጀቢለት እንተሃሎኪ ቅረጭኒ). In case you are wondering, that is a perfect Kerenite Tigrinya! It means, “TseHaitu, I have a stomachache, could you give me a piece of ginger if you have one?”

In the Semhar-Tigrayit, Harressu (ሃርርሱ) means wake him up; in other places it means pick it up. A friend once ate breakfast in a teashop in Massawa and  when he finished, he asked the waiter “Haressu,” (take the plates away.) The snapped, “ኢኢኢህ! ሰክብ ዓላ?” meaning, Ohhh, was it sleeping? That is an expected witty response in Massawa. But to this day I cannot get used to the Semhar “ሓንተ እናስ Hante enaas” (a man). Everywhere else, it is “ኦሮ እናስ -Ooro enaas.”

How about the Tigrinya speakers?

Tigrinya speakers have difficulty pronouncing the long vowel which is common in Tigrayit—and you can tell a Tigrinya speaker in a minute because he has to say one of those Tigrayit words with a “shedda,” (stress.) They would say “hleka” with no stress on the L and killing the vowel. It’s “helleeka.” ህልለካ not ህለካ.

Tigrinya speakers who do not speak Tigrayit or Arabic do not pronounce my name right? To them it’s SaliH, not Saaleh. The short vowel ‘e’ between the L and H, is difficult to pronounce for many—it’s ሳልሕ not ሳሊሕ.

The Sudanese singer Sayed Khelifa had a song dedicated to Haile Selassie in which he says, “Haile keborelley”… kbereley doesn’t come naturally to Arabic speakers. ክቦረለይ instead of ክበረለይ.

Then there are adopted loan words that change slightly to fit the speech pattern of those who adopt the loanwords. In the Gulf states, they borrowed the word driver, but it is not easy for them to pronounce it before Arabizing it to “drewel.” But everything else is easy compared to the sound that Arabs hate the most: P, which they do not have in their language. To them, P and B are the same. Beoble, Bolice, Bakistan, Bancake, Brimier league, Liverbool, etc. I once had an Egyptian coworker in the data center and I used to call and ask for information on certain customers, and if I spelled a customer name with a B or a P, he would ask me: B khefifa wela B teeyla? Is it the light B or the heavy B. He showed me how B is light by asking me to hold a paper in front of my mouth and say the two. Unlike P, saying B doesn’t require blowing between the lips. When you say P the paper moves, it doesn’t move when you say B.

If you want to identify a Pilipino among East Asians, ask them to say 44, they will say “porty por.” P is the closest they come to pronouncing F. I was waiting por you in pront of the oppice.

It’s difficult for Italians to say words that don’t end with a vowel… check their nouns, they all end with a vowel. Roma, Firenze, Bologna, Parma, Palermo, Sicilia, Lampedusa, etc. Or their names: Antonio, Luciana, Renato, Paulo, Jovanni, Maria, etc. If you want to speak with an Italian accent, add a vowel in the end of English words.

Now let me end this segment with the winner: my favorite pronunciations.

See how colorful and fun languages are? Why would one hate any language? Why? Hating languages is a crime. Languages should be loved and enriched, not hated. I think we need a Language Human Rights Defenders—sorry, it’s not human—let’s say Language Protection Advocacy.

As you can tell, hopefully, this episode is my way of whetting your appetite to learn languages and I promise I will visit the topic often. So, if you like this episode or not, I will tell you what to do about it after the next segment.

The New Language in Eritrea

Some are translations while others transliterations, or just loanwords. And for those who didn’t notice yet, there is a new language in Eritrea. It started in the late eighties but now it is perfected;  youngsters have developed peculiar words of their own: Kherribu (for died), khezibu (for lied), Haremarim (for women, chicks), Habiyeya (for I loved her), etc. These and many others are adopted from Arabic and they have created verbs from many nouns. Well, it’s the language market and who knows, if you return to Eritrea in 100 years and said “afqireya”, someone might correct you, “abowatna Habiyeya eyom zblu nerom.” (our ancestors didn’t say it that way!) Now let’s go to the Like and Dislike buttons.

Human beings react to what they see or hear; often times we get the itch to react and make our feelings known. In the era of social media, the reactions elevated to a different level, very loud. If you do not like anything you see, you insult, badmouth and react like a drunk person in a store full of bottles. But if you are happy with what you heard or see, you put smiles, hearts, flowers, etc. Reacting rationally is human, reacting like an animal is irrational. So, for the irrational, I would like to remind them the following: instead of foaming behind anonymity and making vulgar comments, insults, and indecent remarks, it is easier to click the Dislike button. That is where Justin Rosenstein comes to your help. Click the DISLIKE button and save yourself the trouble of vomiting on the screen.

I do not need to tell my decent audience much because they know the buttons are there and they use them properly. If you like today’s Negarit, please click the Like and Share buttons (and don’t forget to subscribe). I do not know who invented the subscribe button, but I will tell you when I find out. Until then, please click the Like, as well as the Subscribe, and the bell notification buttons—they are great ways to express your appreciation. One more thing for the irrational, you can also click the dislike button until Eritrea become a welcoming country, but please do subscribe—it’s my policy that doesn’t discriminate at all, you are welcome.

Finally, how I wish we discussed such topics inside Eritrea, among our people, in literary clubs, conferences and lecture halls where it would have a different level of satisfaction and exhilaration. Where we could teach and learn, where we could gain and exchange knowledge. But that is not possible with the presence of PFDJ, the anti-happiness and anti-stability, the exclusionary… the exclusive cult that is chocking Eritrea. That’s why we’ve to focus. It will be down and we will reminisce our sufferings with a shy promising smile because we do not hold grudges except for those who are choking us and our people. But we do not enjoy seeing our compatriots suffer, even if they are members of the PFDJ cult. We do not have sadistic traits to be that callous and that cruel. Everyone who is not a PFDJ cult member should be thankful he is not. The suffering will be over, sooner than later–the rooster doesn’t lie.

NB: the above is a transcript of Negarit 104–Negarit Youtube channel

*Apologies for not providing proper spelling keys for many words.