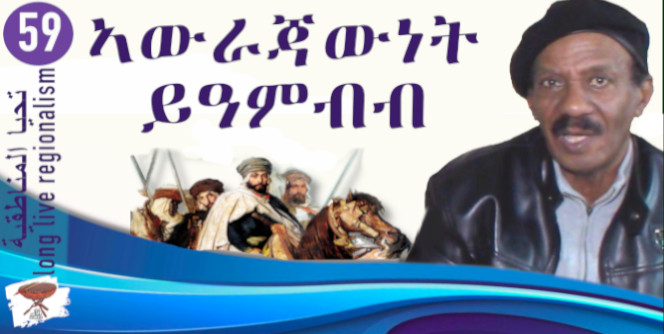 This is a partial script of Negarit 59–the first part of the episode was unscripted.

His name is Muawya bin Abu Sufyan, the founder of the Ummayad dynasty (Ummawyeen) which was established in Damascus and reached to the south of France and to the borders of China—an empire that defeated the Byzantine empire. But Muawya also is the one who took power by force and ignited the Sunni-Shia feud that is still raging almost 14 centuries later.

What I narrate here is not an extensive history, it is just a summarized snippet; and I advise those who want to learn more, to research it further. Just google Muawya or Ummayad dynasty and you will find tons of materials. It’s also helpful to refer to traditional stories, mythologies (Tsewitsway) to get an in-depth understanding of it or at least an introductory knowledge of it.

Also, please understand that I present such snippets to provide context to our national situation—I address topic only if I am convinced it adds to our national discourse and increases our knowledge. So, they are related to Eritrean history.

The history of Muawya is another story that can contribute to our understanding of ancestry, which is so much abused by sectarians.

I have met many Eritreans, particularly from Akele-Guzai, Marya and Mens’a, who say their ancestor is Muawya.

Naturally, ancestry is not a line that continues uninterrupted for centuries because people join other tribes and races as allies, to seek protection, or they become subjects of a nation, etc, and in time they adopt the identity of the nation they join or live within. Therefore, people do not necessarily need to have a blood relation or DNA similarity to be part of a polity. In time, blood and DNA mix, shifts, or is simply diluted and lost.

Politically, many people do not understand the centuries old rivalry and feud between Sunni and Shia Islam. Muawya is in the middle of it.

Muwaya is from the Ummayad clan of the famous Quraish tribe, and prophet Mohammed is from the Beni Abd shams clan of the same Meccan Quraish tribe. Muwaya’s father, Abu Sufyan was a wealthy Meccan notable and one the main characters of ancient Mecca. When prophet Mohammed started to preach Islam, he was chipping away from the sphere of influence of the nobility of Mecca, including Abu Sufyan who was powerful and had influence in Mecca—Abu Sufyan became one of the fiercest enemies of Muslims. But in time, he converted.

After the death of prophet Mohammed in 632AD, his companion Abubaker became his deputy, Khelifa or Tekaee. Two years later, in 634AD, Abubaker died of illness and he was succeeded by Omer Bin-Al-Khatab, who ruled for ten years until 644AD was killed by Abu Luloua, a Persian man. Omar was succeeded by Osman Ibn-Affan who ruled until 656AD when he was killed by rebels from Kuffa, Egypt and Basra after ruling for 12 years—Osman had appointed Muawya as the governor of Syria (Damascus).

Muwaya was ambitious and wanted to be the sole leader and wouldn’t be disciplined. Note that Osman Ibn Affan and Muwaya were both from the Ummayad clan of Quraish and Osman was accused of playing nepotism.

Incidentally, among Osman’s killers were Abdul Rahman bin Udais al-Balawi, it is certainly the tribe we have in Eritrea Sudan and Egypt and other places.

Muwaya rejected the appointment of Ali as the fourth caliph, and wanted to avenge the blood of Osman—eventually he declared himself Khalifa. In the battle of Safin, he got the support of the Governor of Egypt, Amr Ibn Aas, and in Ali was killed in 661AD, and his son Hassen Ibn Ali was ordered by Muawya to abdicate the governorship of Kuffa.

Muwaya started the first hereditary rule in Islam by appointing his son Yezid as his successor and the dynasty ruled until 750AD (89 years). An Ummayad prince, Abdulrahman AlDakhil who survived the massacre of the Ummayads by the Abassyds and fled to his mother’s tribe in Amazeeq (north Africa) and established an Ummayad branch that ruled from their capital, Cordoba, Spain, from 756 to 1031AD when they ruled Nort Africa and the Iberian peninsula. The Ummayad dynast started with Muawya and ended with Merwan II.

The Benu-Mekzoum are Ummayads, their allies from the Quraish tribe. The Mekhzoumis are the clan that established the Shoa dynasty (al Traz al Islaamy sultanates—Fitager, Bale, etc.) Note here that there are many Jeberti families who trace their ancestry to the Mekhzumies who are part of the Umayyads.

The Banu-Makhzum opposed prophet Mohammed in Mecca in the early 7th century. Their prominent leader was Amr Ibn Hisham famously knows as Abu-Jahl (the ignorant, by the Muslims of the time) and Abul-Hakem (The Wise) by his people. He boycotted Benu-Hashim, the prophet’s clan, and opposed the prophet’s mission. They fought the famous battle of Badr and the Muslims defeated the Makhzoumis whose prominent leaders were killed in the battle.

However, there were several Mekhzoumis who were on the side of the Muslims, including the famous general Khalid Bin Al Waleed. Thereafter Abu Sufyan, Muwaya’s father accepted Islam and became the most prominent leader of the victorious Benu Hashim clan. The Mekzoumis became part of the Muslim authority.

And Members of the Makhzumis became governors of Yemen.

During their rule, the Ummayads used to exile their opponents to Dahlak (dar-al-halak). They were mostly politicians, poets, and people who effectively opposed and threatened the power of the Ummayads.

In the mid-seventies, as we were patrolling around Geleb, mensa’e, we saw four people with mountain “Tbiqo” attire, baking bread (burkuta) under a tree. We became suspicious and approached to ask who they were. And that was my first encounter with a serious history. The men said they were from Akele Guzai and were visiting their kins, the Mensaa’ and Maria to collect blood money—the three tribes share such responsibilities and pay it collectively. And this is the story they told us:

Once upon a time, a wealthy man name Suleiman Al Abrabi came from the seaside and dispatched his three sons, Mariou, Manshiou, and Troaa inland. Mariou came to the Mensa and married a daughter of Ishaq and a Dougher of Abrehe—The two parts of Mensa’e are known as Bet Ishaqen and bet Abrehe. Trouaa went to what is now Akele Guzai, he is the ancestor of the Trouaa tribe. The third son. Maryou went further to present day Maria and married two women—one light skinned and one darker skinned: Marya Tselam and Marya Qeyah—the two parts of the Marya. Since then, the three tribes kept their kinship to this day.