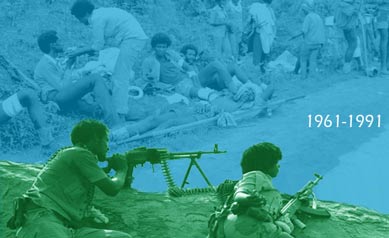 Someone who goes by the name warrior has put it in a rather vivid way: “Even Jesus’ birthday is a controversy among biblical scholars as they argue viciously that his true birthday is not on December 25.” Luckily, we know exactly on what day the Eritrean war of independence ended. It was May 24, 1991. Therefore, for all practical purposes, Eritrea was on its own from that day on. The author of the article, “Our National Hypnosis: April 27 vs May 24” has acted as a good lawyer hairsplitting and raising doubts in the minds of like-minded readers. The issue of assigning a date of independence is a matter of technicality, future generations may change it to April 27, 19993, or May 24, 1993, but the essence will remain the same. The article would have been a good read in free Eritrea and I would be interested to see how free citizens discussed it. I have no problem with resetting dates. Personally, I would prefer May 24, 1993, because that’s when the Eritrean independence was officially announced, and for some years, even the PFDJ, the Eritrean ruling party, has been showing both dates (the dates of de-facto and de-jure independence).

Dates carry significance, and their significance originates from the consensus they enjoy from the interested constituency. In this case, Eritreans believe the war of independence was waged to establish a conducive environment where citizens can have a say on how they will proceed with their collective affairs (the right of self-determination). At the core of the Eritrean struggle had always been a quintessential kernel; it was the right of self-determination. If, in 1961, Eritreans had been left alone to chart their fate according to the federal arrangement, they would not have acted up to endure the years of misery; if they were given that right in 1971, perhaps the war would have ended then; if they were given that right when the Eritrean Peoples’ Liberation Front challenged the Derg, the then Ethiopian ruling party, with its referendum proposal, in 1981, and if the Derg was obligated to keep its promise regarding the result of such an act, the war would have ended then. Therefore, May 24 signifies an end to a war that had been waged to open the possibility for Eritreans to exercise their right to decide on their political fate, and the beginning of that opportunity, an opportunity for which they had been bleeding. The fact that there still exist individuals who dispute September 1, as the start of our armed struggle, does not make it a shaky date; there has already been a consensus and emotional attachments built around that date. The point is: nations choose dates as benchmarks of a journey they map out, dates that signify their aspirations. May 24, carries that symbolism. The rest is academic sactism, to borrow a Facebook slang word meaning vanity.

I did not feel good about the way the topic article wrapped up the journey to Asmara, practically downplaying the process that had led to it. When Nadew Command was decimated, Mengistu Hailemariam asked “What’s Afabet?” skipping his loss of divisions, he wanted to direct the attention of his audience to a small village no body heard of before. Now, the author said, “It was historic alright. After 30 years of a protracted war, and several months of intense fighting to capture major Ethiopian army strongholds in the towns of Afabet, Barentu, Massawa, Decamhare, led to the liberation of the capital, Asmara, on May 24, 1991.” The worst and longest battles took place in the years running up to independence, between 1988 (demise of Nadew) and 1991. Nakfa front was transposed to the South around the vicinity of Keren, there was the battle to capture Keren which ended badly, after that the front stretched from HalHal all the way to the Red Sea linking HalHal-MesHalit-Rora MensaE-Golagul (or the plains of Samhar); a two year grinding battles took place, successive overrunning of garrisons across the highlands continued; the largest tank-tank battle took place east of Afabet where the Derg tried to penetrate (the first of its kind in EPLF mechanized units); the left flank of the front guarding the Asmara-Massawa line was overrun (that was a prelude of the total offensive of Fenkil); kifleserawit 70 (70 infantry division) and support regiments drove hundreds of kilometers and attacked Derg in Assossa; EPRDF/EPLF joint operations were taking place inside Ethiopia; Ethiopian special airborne division was totally annihilated with its commander (either a General or a colonel) killed when the Derg assigned it to mission impossible which was to infiltrate the Eastern flank of the “Semhar front” and attack the nerve-center (EPLF command HQ) of the front IN Afabet from the rear.

Then follows Fenkil Operation, a two-year bloody attrition in the Ginda’e front; a Southern front which liberated the towns of Zalambassa, Senafe, Adi-QeyeH, Degsa, Segeneyti, all the way to the outskirts of Decamhare where another atrocious front was established, lasted more than a year until the final push.

The above mentioned article makes it seem as if May 24 was a preordained (fixed) date. But that’s not correct. When the last battle began on Sunday May 19, 1991 at 1000, the mission was to place Asmara airport within an artillery range. No one knew that Asmara would be captured on May 24, 1991. I would argue that even our top commanders were pleasantly surprised when they saw the fast fall of the Derg army in Eritrea. I believe, nobody thought Mengustu would flee. The battle had practically been decided with the fall of the city of Decamhare which corresponded with the flight of Mengistu from Addis Ababa. Therefore, May 24, signifies a date that generations had bled and sweat for. The rest of political and legal measures that followed that date would have been to give that date a sound legal base. Referendum would have meant legitimizing that date and the essence it carried and contained.

The author of the article stated, “Never mind the fact that the commander of the EPLF military unit that actually liberated Asmara was non-other than, Petros Solomon, veteran fighter and Eritrea’s first Defense Minister.”

Firstly, you would not have one man leading such a major war/offensive. That was not the way EPLF conducted war. It would have been several top commanders working on their specific sectors but also coordinating the offensive. Since this issue is sensitive, I have talked with several people, just to make sure I’m saying is correct, and here is how that final offensive was led.

This is just to make the point that we need to be careful in treating dates, events and personalities. We need to treat history kindly; it has already been botched by PFDJ.

There are also questions regarding the referendum: The idea of a referendum was always alive. The Eritrean organizations mentioned and communicated it to the Ethiopian authorities at different time. In 1981 it was put forward by the EPLF as a concrete and comprehensive proposal. Referendum is just a means. The main issue is the materialization of the opportunity to express your right to determine your fate that could be organized in a form of a referendum or a different format. And the question of the right for self-determination had always been at the heart of the Eritrean struggle. I remember it being discussed on the Awate Forum when someone disputed that the Eritrean revolution did not emphasize that fact; I remember linking the actual press release.

Finally, I would like to mention to the author that I read his articles and find them to be thought provoking. I understand this is meant to have us think deeply about the meaning of the date. I agree with his concluding remark that, “… Eritrea awaits another important milestone in its history: The removal of the dictatorial regime and the ushering of a new era. An era where independence and sovereignty will be synonymous with freedom and liberty, and all her citizens will be thrilled to be jubilant.”

For that to happen though, I would remind brilliant minds to focus on what’s most challenging issue. Battling on dates would not be one of them. Last year, there was a debate on whether to celebrate May 24 or not. Such is the condition of the Eritrean Diaspora. The other day I attended a “justice seekers” meeting, 4 hours were wasted on trivial issues of technicalities. I was exhausted. We need to focus.