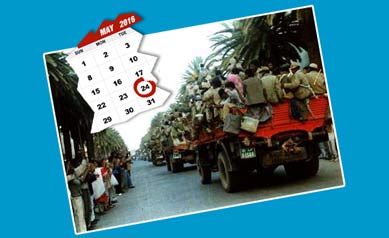 Let’s start with a pop quiz. An easy one, I promise.  So easy, most Eritreans –children to adults– know the answer to this question, without even thinking.  Without thinking, eh? Usually, that doesn’t lead to enlightened conclusions; which is partly what this post is about, the unintended consequences of going with the flow. I guess it is more like a habitual, matter-of-fact response to a no-brainer question.  Anyway, here is how the conversation usually goes:

“When is Eritrea’s Independence Day?”

It was historic alright. After 30 years of a protracted war, and several months of intense fighting to capture major Ethiopian army strongholds in the towns of Afabet, Barentu, Massawa, Decamhare, led to the liberation of the capital, Asmara, on May 24, 1991. The port of Aseb was to be captured the next day, 25th of May, thereby making entire Eritrea to be free of occupation.  Technically, May 25 would have been a more appropriate date to commemorate the end of forced occupation or the defeat of the Derg’s mighty army.  Granted, symbolically, May 24, the day EPLF fighter rolled onto the streets of Asmara atop of captured tanks and army trucks as a cheering and grateful crowd welcomed them, lent itself to be a bigger day to be remembered, but historical facts stubbornly chronicle what happened and when. The powers that be, must have decided it was going to be May 24, instead. And for a reason.

You might be wondering.  Alright, but what does that have to do with the price of tea in China? What does this has anything to do with what is transpiring in today’s Eritrea? Even so, why much ado about seemingly nothing? Good questions. In this article, I am going to argue that a) The dates and their symbolic powers matter a lot; and b) We should do much about the issue, as at the heart of the matter is how, by choosing to celebrate certain dates and be totally oblivious about others, we the Eritrean people, have been willing – albeit unwittingly – accomplices to the handing of power to a tyrant and his regime.

So, indulge me a bit longer please and let’s go back to the question on the date of Eritrea’s Independence Day.  Obviously, we can surmise from the above that May 24, 1991 was not and cannot be the day of Eritrea’s independence. You cannot have a military victory day and turn it into an acceptable birthday of a nation that very day. It was not that simple. Even the current regime, doesn’t officially say that.  Somehow, the official day was going to be May 24, 1993, two years after the 1991 event.  Yet, the huge gap between 1991 and 1993 was soon to be lost in the annals of a myriad of facts and figures that basically amount to the difference in what we Eritreans say among ourselves, what we tell outsiders.

And here we are, with a regime that neither practices liberty nor the true meaning of independence, telling us it is gearing up to celebrate 25 years of independence (wink, wink – 23 years if you are foreigner).  We will be damned if we don’t read between the winks, however.

1993 has something to do with what is now, for all intents and purposes, seen as a minor event in the making of the country.  Except, what kind of a nation spends 30 years fighting a war of independence where hundreds of thousands were killed, maimed and tortured; so that its people can have the right to determine their fate via a referendum, can’t even recall how and when independence actually happened? Caught between the romanticized ending of militarily defeating a brutal enemy and pushing it by force out of Eritrea in May of 1991 and the largely uncelebrated achievement of over 1.15 million of Eritreans voting in April of 1993, our fervent nationalism led to simply ignoring the results of the latter and we opted for “May 24, 1991 is our Independence Day, dammit!”.

In hindsight, this was not a matter of shortsightedness or oversight; it was part of a well-orchestrated maneuver to place the country on a path that ensured constantly reminding the population that it was not their vote that brought about independence (even though the facts say otherwise) but a military solution that was led by one front and ostensibly, one man: Isaias Afeworki.

Never mind the fact that the commander of the EPLF military unit that actually liberated Asmara was none other than, Petros Solomon, veteran fighter and Eritrea’s first Defense Minister.  Ironically, in a few weeks, Asmara will celebrate the event, while Petros and many of his fellow heroes remain prisoners, held incommunicado in an undisclosed location, some for almost 15 years, others for longer.  Ironic indeed; but not surprising in a land of the twilight zone, where parallel universes of truths and make-believe lies live side by side without extinguishing each other.

Back to the chronology of our dates.

As far as total military victory is concerned, May 24, 1991, quickly overshadowed May 25, 1991.  A few days later, the EPLF formed a Provisional Government of Eritrea (PGE). It proposed an internationally supervised referendum on INDEPENDENCE be held, in two years.  The two-year interim period was simply a transitional period, where Eritrean as a nation was yet to be born.  The only viable avenue for independence was for its people to vote yes and for the international community to affirm the election as free and fair.  Inside Eritrea, there were 1,007 polling stations and Eritreans in Ethiopia, Sudan and elsewhere participated in their locality. The votes were casted on April 23, 24 and 25, 1993.  Finally, the promise of the Eritrean revolution that started decades earlier with a demand for the people of Eritrea to be given this very chance was fulfilled. 99.83% voted, yes for independence. Without the military victory in May, 1991, this would have been virtually impossible.  But the truth remains that Eritrea as we know it today is a result of its people’s sacred vote.  There are not that many countries in the world that can say that.

Here is how CNN covered the news at the time.

UNIDENTIFIED CORRESPONDENT: Since dawn this morning, we have been going around polling stations, which opened early, and there were lines of people standing and waiting anxiously to vote. I have been moving around in the city and also in the villages outside, and I find the sense of sense of elation, a sense of expectation, and there is a history in the air, there is something being decided. And you see that people are very anxious to vote and express their views in a very popular way. You see them dancing, cheering, and anxiously waiting for the next move which they hope will decide the future.

BERNARD SHAW, CNN ANCHOR: The international community is recognizing the new republic of Eritrea. Voters there overwhelmingly approved a referendum of independence from Ethiopia. The three-day election was monitored by the United Nations, which declared the voting free and fair.

The United States, Italy, and Egypt are among countries offering formal recognition. And the Ethiopian government says it will accept the results. This after a brutal 30-year civil war that led to widespread famine.

Officially, it was up to the PGE, the Provisional Government of Eritrea, to declare the results and what they mean. It declared Eritrea an independent state on 27th of April, 1993.  The then Secretary General, Isaias Afeworki said in a statement:

(Source: Eritrea Birth of a Nation, an official publication of the government)

Who exactly “decided” it was going to be May 24, by the way?  To the jubilant and grateful populace, it hardly made any difference.  To those who were part of the decision making machine, if they knew this was the beginning of the dictator’s sinister motives, there is no record that anyone of them uttered anything in protest.  Nor is it fair to blame them for not seeing it then. They were perhaps as jubilant, as grateful and as hopeful.  Not surprisingly, only Isaias seems to know the difference and how things need to be laid out for his agenda to be implemented.

The New York Times reported from Asmara during the referendum.

“This is mission accomplished,” Isaias Afwerki, the 46-year-old secretary general of the Liberation Front and head of the transitional government, said after he voted today.

But he was cautious about defining the form of a future government. “The creation of democratic institutions will have priority,” he said, but added, “Democracy should be subservient to stability in a country.”

His last sentence is particularly telling and chilling.  “Democracy should be subservient to stability in a country.” For the next 23 years, he simply made sure that Eritreans do not live a life of stability or normalcy so that issues of democracy become subservient to his agenda, in perpetuity.  The repercussions and cost of opportunity continue to be dearly paid in human blood to this day.

So came to be a faithful day that was yet to be so faithful or significant after all.  Seriously, how many of us Eritreans know anyone who remembers April 27?   If you’re creating a tyrannical system, the last thing you want is a celebration of a day, where the people voted and it mattered and they won. Stark and decisive choices made, not at a barrel of a gun, but at the ballot box.  It didn’t go without notice, however. Before the people get the idea that they will have a voice on how and by whom they will be governed, it was nipped in the bud.  Instead, the country quickly veered toward unrealistic bravado, ultra-nationalism and exaggerated Eritrean exceptionalism.  An era of, The Shitara Code began in earnest, where the culture of disregarding facts, figures and truths is ingrained and celebrated, as aptly put in this great article by Saleh Younis. That’s why we have at least three Independence Days that we can name with a straight face.

May 24, 1991, dammit!  By hook or crook, it is 25th year Silver Jubilee.  Turn on the music louder, hoist the flags higher, dance into ecstasy, ain’t no body going to be messin’ up your high, bro!

May 25, 1991.  If you are into minor technical details. Say, like making sure the liberation of a major port city is also included.  But be ready to be outshouted.

Or May 24, 1993, if you believe official declarations are worth the paper they are printed on.  Even though, you may not care if the date on your birth certificate and your actual date of birth don’t correspond.  Be it ’93 or ’91, May 24 is what you should remember, be grateful for, be guilty about and act accordingly.  Happy Silver Jubilee, compadre!  But for math’s sake, let’s save that for another 2 years.  Seriously, it’s embarrassing – in more ways than one.

And now, reintroducing… April 27, 1993, if you are a stickler to the truth and the significance of internationally observed and respected democratic participation. Another date that, let’s hope, will be given its proper place in our memory and roster of national holidays, soon.  April 27, the true Independence Day.  The date Awet NhafaSh became Awet nay HafaSH, thanks to the voices of HafaSH.

Needless to say, Eritrea awaits another important milestone in its history:  The removal of the dictatorial regime and the ushering of a new era.  An era where independence and sovereignty will be synonymous with freedom and liberty, and all her citizens will be thrilled to be jubilant.

For that to happen however, we all have to wake up from our national hypnosis.