Eritrean Businesses: Between Loyalists and Others 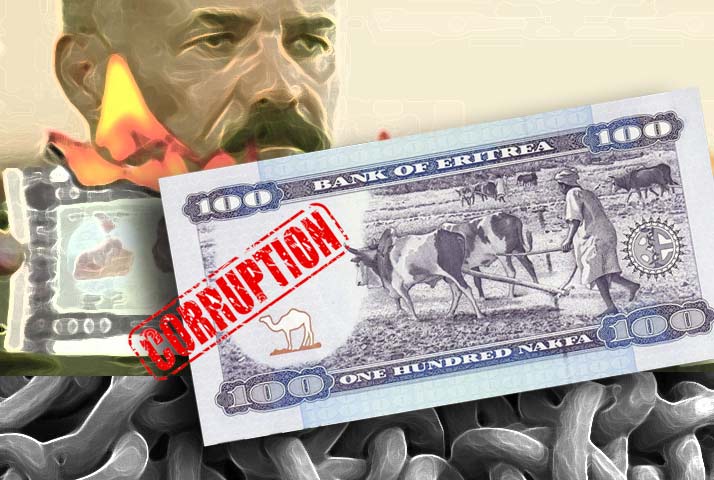 In recent months, the Eritrean government has been carrying out a heightened surveillance on the Eritrean commercial sector, and reports of spies working for the security departments is focused on merchants and traders suspected of transacting in cash, in violation of the government directive that requires them to deal in checks and not in cash.

Since the government announced its decision to change the currency in November 2015, the amount of cash deposited in the banks has been extremely low compared to the amount issued by the banks to individuals and businesses.

Business people suspected of stashing cash are being harassed, and in considerable cases, they have been arrested and their business closed.

Bank account holders are allowed to withdraw a monthly maximum of 5000 Nakfa in cash from the banks which they have to account for by showing stubs of checks proving how they spent the money. Those who cannot provide proof of expenditure are denied the right to withdraw the monthly allowed amount regardless of the balance in their accounts.

Unknown number of spies have been added to the spying units to surveil the activities of the commercial sector to monitor the flow of cash. The spies who usually linger near businesses suspected of stashing Nakfa currency, to estimate the size of transactions of the businesses, are compensated for their services with small perks in the form of ration coupons or the opportunity to stay in cities instead of military camps.

If a business didn’t deposit cash or check equal to the amount of the transactions estimated by officials who depend on the laymen reports of the spies, will be asked to explain or account for the discrepancies between the estimated and deposited cash.

Taxes are usually imposed on businesses based on such haphazard estimations by laymen and spies.

Due to the excessive interference by officials, and the anti-business policies of the government, many people have chosen to close their businesses while a few others continue to sell their inventories to trusted clients in the black-market.

Businesses that are apprehended doing business behind the back of the government and its spies face severe punishments.

When government officials target a business establishment, they devise plans and create excuses to burden it with high tax estimations, penalties, and restrictions to an extent that it becomes impossible for it to continue operating. Once the burden of penalties and fees becomes too heavy, government officials expropriate the business establishments with the pretext of failing to pay amounts owed to the government. Such acts of abuse and corruption makes it possible for the business to be sold to beneficiaries mostly based on nepotism.

In a policy that is not commonly known, the Eritrean government allows the inheritance of businesses only by spouses when a husband or a wife dies. However, if both die, the government takes ownership of the businesses license. Children are not allowed to inherit the business of their deceased parents.

Eritreans consider that policy as “a stealth systematic way of confiscating the business by officials for the benefit of their proteges or relatives.”

In the last two decades, the Eritrean government has created a business class of loyalists working in partnership with senior officers who also find a way to evict households from their residences and take it over for themselves or their relatives.