Eritrea: The Triumph And The Challenge

Posted on July 12, 2015 by Petros Tesfagherghis in Articles 1 Comment 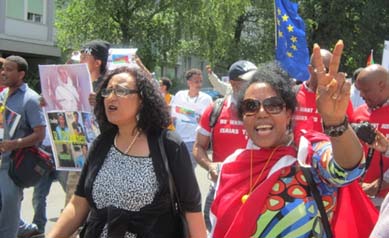 At last the people of Eritrea are being listened; thanks to the Geneva demonstration.

The date was 26 June, 2015 in Genève Switzerland. A friend and I arrived at the Central station (City Centre) at about 11.45 am to make it to 12 to the designated rendezvous where the March to the office of the United Nations begins. The march was to express solidarity with the UN Commission of Inquiry on Eritrea (COIE). On June 8, 2015, the Commission made its 485-page report public and confirmed to the world community the pain and the sufferings that Eritreans are enduring under PFDJ government.

We came across many Eritreans at the entrance and asked one were the meeting place was. He said “we are going there follow us.” We entered through the main entrance of the station and came out through the back door. We walked for about 15 minutes and arrived at a big park – the rendezvous. We were overwhelmed by the activities taking place there. Several people were busy attaching slogans to placards. Some were arranging flags and banners. There were several people holding cameras on their shoulders and on stands. What an extraordinary sight, seeing people doing their share of work with enthusiasm and dedication. The flags of EU countries where Eritreans got sanctuary made the demonstration colorful and beautiful.

It was amazing to observe a sea of people mostly young walking orderly and chanting. At the first rows, there were children and disabled war veterans. The youth were dominant. Their faces shine radiating hope and happiness. The expression in their face tells the tale of love between each other. After all they all share the value of freedom and justice. The value which inspired them and motivated them to rise up and stand up against injustices. The beauty of it that the demonstration has bonded people together even more. What a glories historical day. I told myself that I was glad to be there. The Eritrean people’s dignity – resilience and incredible history of defiance has been compromised by PFDJ oppression. The people wanted their pride and dignity back and they felt they have to do it collectively.

“The popular slogan was down, down dictator”. “What do you want? Freedom” When do you want? Now? “Enough is enough” etc.

I was soon to find out that people have come from as far as Canada, Australian and the United States. They came all the way to witness history in the making. Awate team captured the situation and explained its significance in a single sentence. I quote

“The Geneva rally has represented the true face of Eritrea; no such diverse crowd of Eritreans assembled in one place, around a united cause, in the last twenty years.

The huge march estimated to be more than 5000 symbolizes people’s power. Power the majority of Eritreans did not realize they have. – It represents a mini mobilization, a nucleus that lays the foundation for democracy.

It was remarkable to see the march was orderly, the Swiss police were not in big number and they were very trustful and respectful as to let the Eritreans handle security themselves. Credit to the organizers they were effective. My congratulations to them.

I will not talk more about the March and the message in the slogans as Amanuel Iyasu of Assenna was covering them live. There were also reports on Radio ERENA, The Forum, Awate.com and many more such plus face books. At the same time, there were demonstrations in Ethiopia. In Addis Ababa Eritreans marched to the African Union and the Office of European Union. Similar rallies took place in the refugee camps in Shimelba, Mai Aini – Assaita, Berhalene and Hintzas. There was demonstration in Israel where Eritrean are denied protection.

The triumph and the Challenge

The triumph of the Geneva demonstration presents the justice seekers with formidable challenge. Would the justice seekers seize the momentum? In this moment in time where the Eritreans worldwide are experiencing a profound inspiration the leaders of various political, civil and human rights organizations should put in place a comprehensive path and vision – that shapes the destiny of Eritrea. And present to the public in conferences, workshops and group discussions. Some colleagues including Dr Russom Mesfun of Asmarino.com from California – Berhane Haile of Boston, Miss Bee Nasser of Norway (she was passionately advocating of the rights of Eritrean women), and others expressed expectation of a meeting on Saturday 27, 2015 in Geneva. It didn’t’t happen. That is to be expected the work of the organizers was difficult. However we had a lot of an informal discussion. The Geneva city center displays a variety of restaurants and cafes with comfortable seats outside. It is there that Eritreans engaged in discussions in the form of brainstorming – The main issue was “the way forward” I remember there was this youth literally on fire demanding that people should work in unison and accelerate the demise of PFDJ. I liked his discourse and his spirit to move on without wasting time. The youth seems to realize the damages of fragmentation. People were sensing that it is time to radically change in the way the opposition works. They expect the older generation to share their wisdom and experience admitting their participation is critical to the struggle for democratic change.

It is during that discussion that Suleiman Adam – chairman of CDRiE mentioned the conferences that will take place in London, Oakland and Bologna. The conferences are organized by BOLOGNA FORUM. Its objectives are summarized by Miriam September in her face book. It goes;

“In my view, nothing is more important than working on the increased effectiveness and relevance of the Eritrean opposition. This will not only help shortening the life of the dictator, but above all, mitigate the risks post PFDJ. The Bologna Forum aims to achieve just that and this is why it has a huge importance. As a people-lead effort, it will only work with everyone’s contribution and full participation. And that can only be achieved when the enormous potential value of his effort is truly recognized. Hope to see many of you in London, Oakland and Bologna. To make it happen. The initiative s is very encouraging and timely.

I don’t hide my concern that the justice seekers in UK is not playing the role it was supposed to play. It was weakened not by fragmentation only but by complacency. It is far away from being action oriented. Some studies indicate that there are up to 50 Eritrean communities in UK. To the advantage of PFDJ- the communities don’t engage in debate about the social situation let alone the political situation in Eritrea and have become de-politicization centers. This system encourages conspiracy of silence, and the UK activities being vibrant few years ago have become surprising weak today. Such weakness is predominantly in London. Those outside London in the North are much better.

As a consequence, the justice seekers are not visible to the British Government authorities whose contact has been with the Embassy of Eritrea in London. PFDJ has assured the British Government that the indefinite national service is reinstated to be 18 months. That may be one of the reasons why the Home Office came with the following. I quote from Eritrea-Focus electronic newspaper. 1

“In March, the UK Home Office issued two documents, Country Information and Guidance Eritrea: Illegal Exit, which in a combined 64 pages have hardened the asylum rules by which thousands of Eritreans will be judged.”

Today with the report of ICOE an environment has been created that makes it relevant to listen to the views of the opposition. In such political climate the provision of credible opposition in the form of UK voice is essential to engage with the British Authorities. To find ways to form an umbrella sort of “UK voice” has been the subject of discussion during the commemoration of Martyrs day, June 20. Subsequent meetings are arranged to take place at the hall of “International initiative for Peace” off Victoria Station.

At last the people of Eritrea are being listened. Their pains and suffering acknowledged by the international community and the highest authority in our planet, the United Nations. Time to seize the momentum.

Victory to the Masses