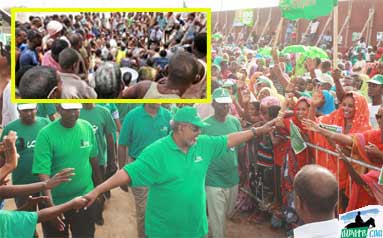 Over 260 Eritrean refugees have been detained in Neged camp for over a year. Djiboutian authorities claim Neged is a Djiboutian police academy.

Most of the refugees are ex-soldiers of the Eritrean army who escaped from forceful and indefinite conscription. They are still living in appalling conditions in Neged camp.

Djiboutian authorities are determined to keep the refugees under detention. An official said, “Releasing trained soldiers into the streets is a security concern and we will not release them until the UNHCR or a third-country accepts them.”

According to the official, twenty five refugees have chosen to return to Eritrea, and Djibouti has informed the Red Cross accordingly. So far, the Red Cross has not received a reply from Eritrean officials to receive the would-be returnees. The Djiboutian official stated, “The Eritrean government is not interested in the refugees and considers them traitors.”

Around 141 of the refugees are willing to be transferred to Ethiopia while a few others would like to wait in Djibouti hoping to get a chance to settle in Western countries.

The USA and Canada have been taking refugees for settlement although veteran combatants, older refugees, and those with little or no education don’t seem to stand a good chance for resettlement; a refugee said, “There is clearly an age discrimination.”

The refugees are living in poor conditions with little medical care, and they sleep in the open yard to avoid the sweltering heat inside the rooms. Temperatures in Djibouti rise to more than 100 degree Fahrenheit in the open.

The Djiboutians have indicated their inability to provide better care than the one they are currently providing to the refugees. Indicating that Djibouti is a poor country, they claim the cost of keeping the refugees at $15 per day per person is a heavy burden on their meager resources.

Referring to the Eritrean Diaspora, the Djiboutian official said, “If you think we are not providing enough for your refugees, maybe you can take care of them by providing provisions and also sending volunteer doctors to take care of them.”

Several Eritreans have tried to help resolve the Eritrean refugee situation in Djibouti to no avail. Mr. Haile Menkerios, Under-Secretary-General of the UN met with both the Prime Minister Hailemarian Desalegn of Ethiopia and President Ismail Omar Guelleh of Djibouti and talked about the Eritrean refugees. Mr. Yousuf Berhanu, the Executive President of Eritrean national Council for Democratic Change, has written to the Djiboutian authorities appealing on behalf of the refugees, and to the Ethiopian government to accept the refugees.

In Geneva, Elsa Chyrum, of Human Rights Concern Eritrea, carried out a hunger strike outside the Djibouti Mission to the United Nations in a campaign to release and resettle the Eritrean refugees held in detention in Djibouti.

So far, all efforts to secure the freedom of the refugees have failed.

The Djiboutian official didn’t appreciate the Eritrean Diaspora’s campaign implicating Djibouti in the refugee crisis. He stated, “you should demonstrated in front of Eritrean embassies who created the refugees, not Djibouti…you should recognize that Djibouti finds itself in an unfortunate situation of caring for them.”

In a veiled threat, the official said, “We don’t want to complicate their situation by pushing them back to Eritrea across the border.”

Observers believe that the Ethiopian government will accept the refugees who have indicated their willingness to be transferred to the Eritrean refugee camps in North Ethiopia where there are several camps that house tens of thousands of Eritrean refugees who escaped from Eritrea.