Posted on May 8, 2015 by awatestaff in Articles 9 Comments 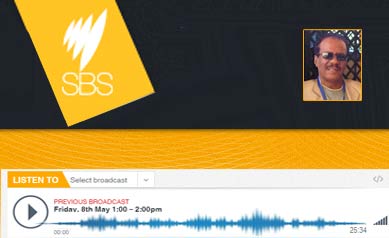 On Wednesday May 6, 2015, Beyene Semere of SBS conducted an interview with the Saleh “Gadi” Johar. Beyene Semere is the director of the Tigrinya service of the SBS.

The Special Broadcasting Service (SBS) is an Australian public broadcasting radio services which also has an online and  television network. According to Wikipedia, the stated purpose of SBS is “to provide multilingual and multicultural radio and television services that inform, educate and entertain all Australians and, in doing so, reflect Australia’s multicultural society“.

The 25 minute interview is centered around the Yemeni crisis and covered some of its effects in the region. FIND THE INTERVIEW LINK BELOW: