Aster & Sherifo: My Parents Who Have Disappeared for 13 Years 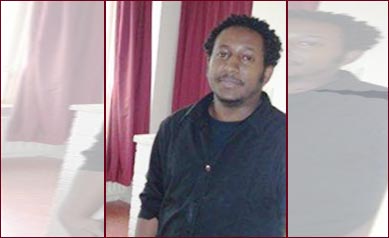 My name is Ibrahim Mahmoud Ahmed Sherifo. I am the son of two veteran fighters of the Eritrean revolution – Aster Fissehatsion and Mahmoud Ahmed Sherifo. Both of my parents were former combatants but now Prisoners of Conscience. Their stories and misfortunes are in the public domain. Amnesty International, Human Rights watch and other institutions have documented their stories on numerous occasions. Please read the following linked articles for a brief description about the identities of my mother and father.

Like many children of my generation, I was born in the battlefields of Eritrea in a place called Ararb which is located in what was then called Sahel but later renamed the Northern Red Sea region. The next set of my child-memories, until I was four, stem from a place called Hishkeb. One can imagine how hostile life was in these inhospitable surroundings of Sahel which were literally war zones during the armed struggle. Actually, I barely retained significant memories of Ararb, Hishkeb and other camps and battle grounds such as Anberber, She’eb and Arag where so many stories of heroism remain buried. I always struggle whenever I try to revive the early memories of my parents as they navigated through those places. Most of the time, although indistinctly, I see them in our camouflaged stone shack which looked like a natural extension of the rocky hill on which it was built. There in that shack I spent a lot of happy times in the presence of my gentle and soft-spoken father and my loving mother. I look back to those times with pride, nostalgia and sometimes with bewilderment for I knew no other life but one filled with stoicism, bravery and camaraderie.

My best friends were children like me, children of Sahel who came face-to-face with hostility early on in life. We were fairly used to life saturated with chaos – hearing explosions, scurrying for safe places during aerial bombardments, being herded in and out of bomb shelters, seeing combatants going to or returning from battlefields and so forth. We sang songs that lionised our staunch fighters; we sang songs for Eritrea – songs that eulogised the history, culture, traditions and struggles of our people. On the whole, we were raised under the umbrella of the Eritrean armed struggle.

As already mentioned, my parents, unlike children in many parts of the world whose parents held normal jobs, were different; they were freedom fighters. On one hand, I can say, I was not spoiled because I spent not enough time with both of my parents who were always on military missions that took them away from me most of the time. I felt I lived in luxury because I knew other war-children never had the chance to see their parents return from their missions. On the other hand, no matter what the circumstances were, I were pampered by the freedom fighters who looked after me and other children in the absence of our parents by making sure we were fed and out of harm’s way. Figuratively speaking, the tegadelti (combatants) were our uncles, aunts and close family members.

In May 1991, as soon as our freedom fighters overran the country and liberated Eritrea, I moved to Asmara to start a new life. Life in Asmara, our capital city, was strange, to say the least. It was strikingly devoid of fear and threats of warfare. I started to experience what people would refer to as normal childhood. I made new friends, started attending pre-school, played in the neighbourhood playgrounds. However, to me normal childhood did not only mean receiving basic needs within a family unit or live in a safe environment, but also seeing my ‘mieda’ (battlefield) brethren within the safety of city-limits. In point of fact, I was astounded by many things around me. I lived in a household with running water and electricity, I wore nice clothes and proper shoes, I enjoyed various entertainments and visited all kinds of shops in the neighbourhood. Generally speaking, it felt like life in Asmara was a big party.

In my ‘Azillo’ year at Comboni, my best friend and I played and ran around as if there was no tomorrow. I guess running like the wind was our way of recovering from the effects of the era of the armed conflict and claiming the post-independence era as our own. I can say the following school years at Awet School were by far the best years of my life. I remember Awet School fondly because it gave me years of simple harmony between me and the life I was leading then. However, as that very harmony made the small things around me grow, a couple of years later, as luck wouldn’t have it, the Sematat High School years goaded the harmony to decay.

In 1998, as I was about to finish my Junior High School education, Eritrea went to war against Ethiopia. In 2000, by the time I moved to Sematat High School, the war was coming to an end leaving nineteen thousand young Eritreans dead in four rounds of warfare. At the same time, another war was brewing on the domestic front; disharmony among top leaders of the Government of Eritrea and People’s Front for Democracy and Justice, the ruling party, flared up over the conduct of a war that left Eritrea badly bruised, including major territorial loss to Ethiopia. Although in the beginning the disharmony that arose among the leaders and the President’s refusal to implement the new Constitution were being conducted behind closed doors, somehow the situation exploded when the president blocked all opportunities of reconvening of both state and party leaders to debate the concerns.   In May 2001, both of my parents, together with the other critics, were suspended out of hand, at which point they decided to publish the Open Letter which called for peaceful and democratic dialogue with the President of Eritrea. On 18 Sep 2001, the Open Letter incident sealed the fate of my parents; they were picked up by security agents and never seen since then.

How serious a crime did my parents and the other senior government officials commit when they called for free and fair elections? Why did the President react to their criticism with such arbitrary, cruel and excessive measures? When I was growing up I always believed that we Eritreans were going to change not only our world but also the home-grown dictatorships in post-colonial Africa. I guess I was wrong.

Although I do not know about the physical conditions, medical needs and psychological state of my parents, I do know that they are very much alive in my heart and in my mind. Yes, I do know their ideals are still growing and will eventually stand the test of time. On this day, the 13th anniversary of the disappearance of my parents, I am remembering them with pride and admiration. I truly believe the President and his PFDJ cohorts are guilty in the court of conscience; therefore, they are the real prisoners, not my parents! I sense my parent’s conscience and ideals are roaming free within and beyond the four walls of their cells.

The story is written in collaboration with Free Our Parents – Eritrea