The Abiy and Isaias Relation Is Being Tested 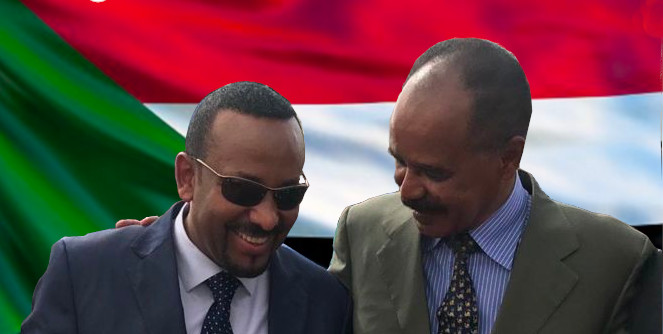 Two weeks ago  the Sudanese Transitional Military Council (TMC) aborted negotiations with the Sudanese alliance, known as the Declaration of Freedom and Change Forces (DFCF), on Monday, June 3, 2019, the TMC violently dispersed the demonstrators, killing over a hundred people and wounding dozens more.

The bloody assault on the DFCF was led by the Rapid Response Forces (Janjaweed) that is under the command of General Hmedti who has previously made public threats against the forces of change.

Following the crackdown, the African Union (AU) issued a statement calling “for an immediate and transparent investigation in order to hold all those responsible [to be] accountable…. [and urged the] Transitional Military Council to protect the civilians from further harm.”

Earlier on April 30, 2019, the AU had “demanded all Sudanese stakeholders to urgently resume negotiations in order to … pave the way for a civilian-led Transitional Authority.”

The AU also called “on all international partners to reinforce common efforts towards the immediate cessation of the violence and rapid resumption of negotiations for a political settlement.”

Following the June 3, 2019 raid, the AU suspended Sudan’s membership from the continental organization and called for all sides to return to the negotiations table.

Last Friday, PM Abiy Ahmed arrived in Khartoum and met with the representatives of the DFCF and members of the TMC. General Hmedti, the vice chairman of the TMC, who is allegedly responsible for the violent crackdown on the protesters was conspicuously absent from the meeting.

Though not much is known about the results of PM Abiy’s talks, the forces of change accepted PM Abiy’s mediation, but insisted that any negotiation should lead to a transfer of power to civilian rule.  To lead the mediation efforts, PM Abiy had appointed Ambassador Mohamed Derir as his personal to Sudan. Ambassador Mohamed Derir is a former Ethiopian minister of culture and has also served as an ambassador to Egypt, where he led the negotiation with Egypt over the Nile water.

PM Abiy’s spokeswoman indicated that Ethiopia’s mediation is part of, and in support of, the AU mediation.

However, three days ago, Sudanese Professionals Association (SPA) has called for a general strike that was supposed to continue until the TMC relinquishes power to a civilian government. And the street of Khartoum has been mostly empty with very light traffic. Also, the SPA has called for an international investigation into the massacres at Khartoum to hold those who ordered the raid accountable.

The international community and human rights groups have condemned the violent crackdown.

Today Ambassador Mahmoud Derir stated that the two sides have reached an agreement to resume negotiations on forming a transitional council, and consequently, the DFCF has agreed to halt the general strike and civil disobedience.

On June 3, 2019, the Chairperson of the AU Commission, Moussa Faki had strongly condemned the violence that erupted in Sudan in which many civilians were killed or injured.

In reaction to the AU statement, on June 5, 2019, the Eritrean government issued a press release in which it criticized, “the inherent flaws that have afflicted the African Union since its inception; its failure to meet the aspirations of the African people.”

The statement added, “efforts exerted towards reforming the AU have not succeeded to date,” without explaining the efforts though it expressed its perplexity over the AU’s “unwitting role to provide suitable pretexts for external intervention,” criticizing “the AU’s posturing on the events unfolding in Sudan,” which it characterized as “vivid illustration of this deplorable state of affairs.”

The Government of Eritrea also requested the AU “to refrain from internationalizing and exacerbating the situation in Sudan.”

Now that PM Abiy’s office indicated his mediations are in support of the AU efforts, it is not known whether Isaias Afwerki will condemn the Ethiopian mediation.

In the last, Isaias Afwerki was very critical of the AU peacekeeping mission in Somalia where he played “a spoiler role with the help of Libyan funds”. In 2009 he was accused of supporting the Al-Shabaab armed group and the accusation led to a UN Security Council sanction that was enforced against the Eritrean government until late last year when it was lifted with the support of PM Abiy Ahmed.

Now that Ghaddafi of Libya is dead and Libya in turmoil, Isaias’ government has become an ally of Saudi Arabia and the UAE, the two countries that are believed to be bankrolling the Sudanese Military Council.

According to the New York Times, “Since the Arab uprisings of 2011, Saudi Arabia and the United Arab Emirates have used their considerable resources to promote authoritarian governments run by military strongmen in the region.” And though the Isaias government objects to the involvement of the AU in an African affair, it didn’t mention anything about the interferences of the regional countries, mainly Saudi Arabia and the UAE, in Sudanese affairs.

The chairman of the Military Council, “General al-Burhan has been overseeing Sudan’s more than 10,000 ground troops in Yemen. These troops include thousands of militiamen from the Rapid Security Forces headed by General [Hmedti].” Sudan is actively involved in the Saudi-UAE war on Yemen.

On Saturday, Isaias Afwerki arrived in Cairo, where he met president Al-Sisi; the two “called on the Sudanese people to address the demands of the transition period with responsibility and to resist undue external meddling.” Both Al-Sisi and Isaias Afwerki are allies of SaudiArabia and the UAE, the two oil-rich countries that provides them with financial and military support.

Relations between PM Abiy and Isaias

Regional observers suspect that the diametrically opposed approaches of PM Abiy and Isaias in resolving regional conflicts is being tested in Sudan. While PM Abiy’s initiative calls for the countries of the region to cooperate with regional and international organizations to resolve conflicts, Isaias Afwerki has been criticizing any foreign involvement save the one by Saudi Arabia and the UAE which he didn’t mention. The observers also suspect Isaias will resort to his old way of playing a spoiler role in Sudan as he did in Somalia for decades.