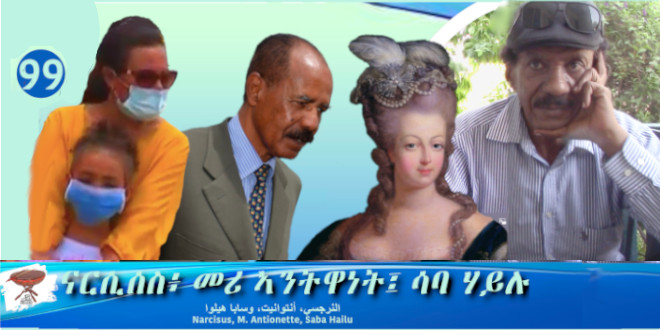 The following is the draft script for Negarit 99. This time it has been two steps forward, one step backward because #100 preceded #99 so that #100 coincides with Awate Day on September 1, 2020.]

I think it was in ninth grade that we learned about The French Revolution of  1789—it went until 1799. In a way it was like the derg, they both overthrew established monarchies.

Both heralded a bloody period that shed so much blood. The French ended up in a dictatorship under Napoleon Bonaparte while the Ethiopian one ushered in Mengistu’s dictatorship. The motto of the French was Liberté, égalité, fraternité, while the Derg’s was Land to the Tiller. However, while France became a republic of liberal democracy, Ethiopia became a totalitarian state.

While the American Declaration of Independence inspired the French to write the Declaration of the rights of Man and citizen, Marxism Leninism, and a tinge of Maoist tactics, inspired the Derg. The victory of the American colonies against the British empire had encouraged the French revolution. The unfortunate equivalent of Haile Selassie in France was Louis XVI, the former the last of the so-called Solomonic dynasty while the latter was last king of France.

The Derg buried Haile Selassie in his royal bathroom (as popular tale goes,) in 1793 the French chopped the head of  louis XVI with the guillotine.

But the French queen is more famous than the king. Marie Antoinette was Austrian, the daughter of Empress Maria Theresa, the Maria Theresa Thaler (dollar) was named after the queen of Austria. Her daughter Queen Marie Antoinette lived a lavish life spending on castles, villas, décor, fashion, ornaments, arts and the like.

However, the most famous legacy is the introduction of the ancient Greek and Roman styles, a neoclassical furniture named after Louis XVI.

The furniture is still  sought after by the wealthy. Importantly, they blamed all the pre-revolution economic crisis on her.

The revolutionaries swiftly Marie Antionette in The French version of Abyotawi shengo, and sent to the guillotine in 1793, nine-months after the execution of her husband.

Of course, revolutions are strange, and they took her son away and handed him over to a cobbler, who was neighborhood Qebelle leader. Her son testified against his mother of wrongdoing!

You must be thankful Saba Hailu is not like Marie Antoinette.

Look at her with her grandchild, those who can’t see your children let alone grandchildren, eat your heart out. But Saba lives in a modest house, no servants or the like and visitors serve themselves, like in a buffet. That is why in the last visit of Abiy to his vice-dictator Isaias’ house, Askalu served coffee and the dictator general served bread himself (it’s a cake). So spoiled Eritreans, get your cake or Hmbasha, from Abiy. If any Eritrean is hungry, let them ask for cakes of hmbasha from Weizero Saba Hailu. Problem solved.

Marie Antoinette is immortalized by two quotes. First, she said, ‘excuse me sir, I didn’t do it on purpose” when she accidentally stepped on the foot of her executioner. But the second one is profound though some people claim it she didn’t say it. But it has become part of the collective human memory and is mostly remembered  that way. When the peasants revolted, she found out it was because they couldn’t find bread; she quipped,  “why don’t they eat cake?” And she is remembered by Marietta, Ohio, the city they named after he in 1788.

Eritreans don’t be too spoiled, if you do not find food, try eating cake. But if you think there are no bounties in Eritrea, let’s see what we have: Fruits, cakes, shHan-full, cappuccino, water, food, food, and more food. Why don’t they eat cakes, like my friend is doing? Why can’t they bake cake?

See! my friend the new information minister of Eritrea proved all the whinners wrong. Eritrea is moving ahead, and he is there to remind us of the real Eritrea—see Sawa for example! Isn’t that impressive. I am glad they appointed him as Eritrea’s information minister, well deserved, Unlike the earlier minister who couldn’t tell us in ten years, what new one informed us in a year. If anyone wants bread, ask him, or visit Weizero Saba Hailu. The new minister has shown us, plates of bean, the shaHan-fool, fruits, dairy farms, stables, water pipes and many more. He also showed people how to bake cakes. God has blessed Eritrea with abundant bounties; every spot “Brezedenti” Isaias steps on, it grows something–corn, wheat, even tomatoes. We know because the new information minister of Eritrea is persistently telling us so.

What does the name Nardos mean?

Science is not so good if you depend on mythology, it destroys it. Abowatna emewatna and then science in the form of archelogy and anthropology, linguist and rational thinking destroys your myth. But if mythology is just fund, stories, no hate, violence, or fascism involved, why not? The hyena spoke, fine. It’s a good story, the lion cried, another good story. Just avoid the stone age irrational type of stories. It’s the same with the story of Narcissus—some people do not believe it others keep repeating it because it is a fun, story and not harmful.

Greek mythology has a story about Narcissus, a handsome hunter who was so enamored with his own beauty. He was the son of gods, every character in Greek mythology is born of a god or a goddess, or both. One day Narcissus was hunting and a girl, sort of a deqi Hdrtna, fell in love with him and followed him. When she wanted to embrace him, he turned her back and she was heart-broken, and she disappeared in sadness but only the echo of her sound remained. Another goddess was mad at Narcissus and wanted to punish him—and when she found him thirsty, she tricked him to go to a pond  where he saw the reflection of his face but maybe he never saw his face before, he loved what he saw and wouldn’t take his eyes of the reflection until he melted away. Some say he drowned in the water and disappeared, but it is mythology, who cares. Later, Narcissus reappeared in the same spot as a flower named after him, Nardos, or Nerjis in Arabic. That is the story of why Narcissism became a negative term associated with self-absorbed, self-centered and arrogant people. That is why I think Selfie is a manifestation of narcissism. IMAGE here is the Nardos flower.

I think the Selfie is not only narcissism, it’s a sickness, though could be acute or mild, but it is an expression of narcissism. Back in the day, we used to hold flowers and plants, maybe a narcissus flower which no one knew about, or throw our hands over our friends’ shoulders—that was supposed to be the proper pose when taking a picture. Now we are in the age of selfies. But still I do not understand why many people pose lasciviously when talking a selfie.

If someone takes more than three selfies in a week, a serious narcissism bug must have bitten them. But there are two types of selfies: one is totally vane with no redeeming value and no substance at all, while the other is uplifting and refreshing though rare, like this one…[check the video @ 17:48 minute mark]

See! If this girl would appear with such sharp and extremely insightful, inspiring and empowering message, even ten times a day, I will not have enough of her smart words. Not the kind of talk and appearance that evokes throwing up.

Who is this girl? I would like to talk to her just to register my personal appreciation. When was the last time  you heard such surgical-knife sharp words? For me it has been a while—admit it, you haven’t heard such a delivery for a long time, never.

Hamid Idris Awate’s history stayed in jail for too long. Many of us consider Awate a symbol of Eritrean patriotism; we were sure the name of our national icon’s name will be restored. It did. For the last thirty years, the PFDJ and its supporters ridiculed, insulted and questioned the patriotism of anyone who raised the banner of Awate. They wanted one single icon in Eritreans epic struggle and national narration. However, truth prevailed and last week every patriot worth his salt celebrated Awate Day. It was a revenge of history and personally, I am elated; finally, we are coming together. Thus, we victory is within reach. Eritreans will be liberated.