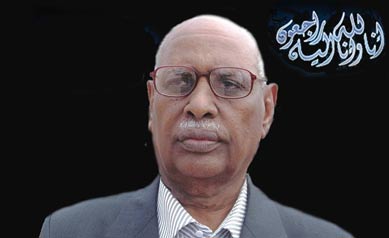 “Indeed we belong to Allah , and indeed to Him we will return.” That’s a total submission to the will of God and to the authority of death that doesn’t exclude anyone. On Monday morning, July 27, 2015, the much respected Ustaz Saleh Hamde passed away. The deceased has been wrestling with illness in the last few months to finally succumb to death in his hospital bed in Melbourne, Australia.

Ustaz Saleh Hamde Salman was born in Keren 1934 where he finished his elementary education and later attended the second batch of the Bet Gerghis high school in Asmara, after which he joined the Teachers Training Institute and graduated to start a lifelong career as an educator.

In his long years of service as a teacher, Ustaz Saleh educated hundreds of Eritreans, beginning with his first posting in Agordat and then Keren.

In the 1960s, Ustaz Saleh attended the Education Administration Institute in Addis Ababa and was appointed as the principal of the Keren elementary school, but he wouldn’t stay there for long as he was always under the watchful eyes of the Haile Sellassie regime. Soon, the government kept transferring him to many places to deny him continuous connections with his fellow members of the underground national movement. He was jailed for three months and frozen for a while until he was given his job again, but this time he was moved to Nakfa, Asmara and many other places.

Ustaz Saleh left the “Haraka/Mahber Shew’atte” underground movement and aligned himself with the ELF under Hamid Idris Awate.

In the mid 1970s, Ustaz Saleh joined the Eritrean Liberation Front and worked with his lifelong colleague Ustaz Mahmoud Mohammed Saleh in the curriculum department. From 1977 to 1997 he was the director of the UNESCO school in Kassala, Sudan. Today, his  students from that school are scattered all over the world–many of them successful professionals.

In 2008, Ustaz Saleh relocated to Melbourne, Australia, where he remained a mentor and father figure to the Eritrean community in Melbourne, attending to its social cohesion and urged the young to focus on attaining higher education. Ustaz Saleh was a man who struggles to keep the cohesion and unity of the ever growing Eritrean community in Australia, continuing his role that he played in Eritrea, and then in Sudan.

In 2010, he was elected to the Commission that was tasked to prepare for the Hawassa Conference, where the Eritrean National Council for Democratic Change was established and where he declined pressures to run for a leadership position.

An ardent patriot throughout his life, the deceased remained a dignified and honest man who commanded respect. He remained true to his patriotic zeal, and actively participated in the long struggle for the dignity and freedom of the Eritrean citizen since the rule of emperor Hail Sellassie, the bloody rule of Mengistu Hailemariam and until his death, his death, against the unjust rule of Isaias and his PFDJ regime.

*Content is basically taken from a eulogy by Mohammed Tewekel, Ustaz Saleh’s son in law