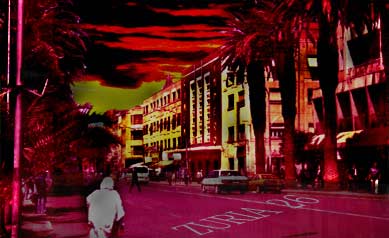 Over the last few weeks unusually widespread arrests has been reported from Eritrea. Most of the arrested individuals used to report to senior officials and commanders who seem to have fallen out of favor. A number of civilian and military personnel who reported to Major General Tekle Manjus were arrested.

Until recently, Major General Tekhle was in charge of a wide network of security and business interests spreading from Western Eritrea and Eastern Sudan to South Sudan, through secret middlemen. He is also believed to be associated with Sudanese officials who are allegedly involved in human trafficking.

While the social, political and security situation is boiling in Asmara and other places, president Isaias Afwerki has been staying outside the capital as he always does in time of crisis. This time the Eritrean president is working from a makeshift office around Adi Halo, a village close to the source of the Mereb River and Mai Nefhi water reservoir, where it is believed he is supervising the construction of a dam.

Meanwhile, the plight of the over six-thousand conscripts, mostly girls, who have been living in bad conditions in gorges of Heday river close to the town of Afabet for over a year, has become the talk of the youth in Eritrea. The Heday conscripts are from “Zuria 26”, the ill fated 26th round of the forced conscription.

A witness stated, “they are doing nothing, just languishing there, famished, sick and bored.”

Few people who got a chance to leave the Heday camp carried messages from the conscripts, “asking their parents and relatives to send them money and food.”

Senior officers of the regime usually open shops around the camps to sell essential needs to conscripts who have the money.

Over a year ago the conscripts of the 26th round were recalled to Sawa to be deployed. According to an article in an new electronic magazine authored by “Tesfom Habte”, when asked about Zuria 26, the presidential adviser, Yemene Gebreab, replied, “those who didn’t pass the matriculation exams will be trained in Afabet [Heday] by the ministry of education while the ministry of information will provide audio-visual tools for the training… but sadly there is a disagreement between the two ministries.”

Tesfom sarcastically asks, “I would have liked to ask [Yeman Gebreab], where in the deserts of Heday would they find a power supply socket for the projectors and other electronic gadgets?”

Sources from Eritrea said, “While government officials downplay the plight of the conscripts of the 26th round, “Zuria 26” has become a rallying cry among Eritrean youth who are fearful of facing the same fate as Zuria 26.”

Eritrean students have to report to boot camps after they finish junior high school, eleventh grade. After completing 12th grade in one year a few are sent to colleges but the rest are deployed to work in different construction projects managed by the ruling party for an indefinite time with a minimum or no wages.