Distribution Of New Eritrean ID Cards In The Diaspora 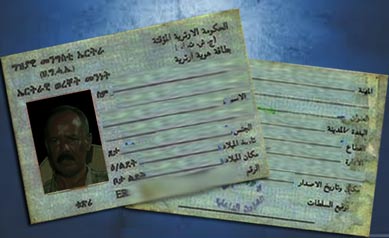 In October 2014, the Eritrean Government announced it will retire the old Eritrean national ID cards that were issued before the referendum of 1993 and replace them with new ID cards.

The announcement had indicated the new ID will be digitally printed, unlike the old ID that was hand written. According to government sources, the old ID cards were “relatively easy to forge,” which resulted in “many African migrants — mostly from Ethiopia — using fake Eritrean IDs to gain asylum in the West.”

Recently, Eritrean consulates in major cities have started the process of changing the ID cards and have prepared makeshift facilities for shooting ID photographs.

The embassy has rented work-spaces in several US cities, and applicants for the new ID are filling up the application forms which include personal details including the yearly income of the applicants.

Knowing the income of Eritreans is important for the collection of the 2% tax that the government imposes on all Eritreans even those who hold Western citizenship. However, it is not known how the embassy will verify that the income declarations are honest.

Diaspora Eritreans who do not pay or clear accounts in arrears do not get any consular service or any government service in Eritrea.

Though the government claims equal treatment of all languages, the website of the Eritrean embassy in the USA has an electronic application for ID card in English and Tigrinya only.

The Eritrean government classifies the population along linguistic lines, but insists on calling it ethnicity; applicants are expected to choose an “ethnic” identification out of the pre-determined nine language groups.