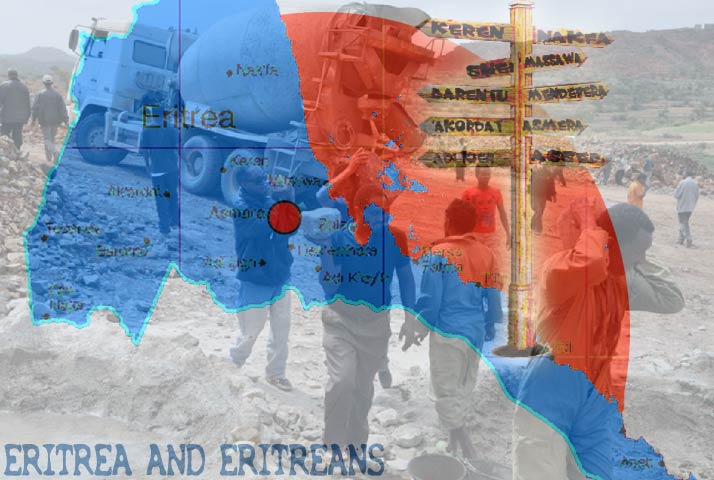 Awate.com has always encouraged Eritreans to venture far from their narrow circle of friends, from the confines of their villages, and try to interact with those who do not share with them several layers of identities. This website believed that knowing each other’s’ fears, concerns, and suspicions, eliminates mutual mistrust, ameliorate suspicions, and helps in building a cohesive national unity based on knowledge and information, not on prejudice and wrong primordial judgments. However, it doesn’t believe that coerced, and militarily guided introduction of Eritrean cultures, can create a social bond that can withstand destructive political agitation. People should do civil tasks as free citizens, just like what many Eritreans have been doing for ages, on their own free volition.

Notwithstanding the lack of freedom in the country, some Eritreans have taken advantage of the available opportunities to learn about their country and people—and they have better political sanity compared to those who are ignorant about their people and country. Tesfabirhan Redie is many times lucky. He grew up in a region known for its exemplary diverse lifestyles, he was born to a religiously diverse social group, and a region that straddles the major Eritrean social divide. In the middle of a debate in the Awate Forum, Tesfabirhan, or Tes as he is commonly known, posted a lengthy comment, and the Awatestaff thought of presenting his comments as an independent post for wider exposure, and to help trigger a more serious debate concerning the Eritrean diversity. Here follows Tes’ edited post.

I grew up in an area where I didn’t see differences of religion, language, or color—I descend from many bloodlines. It was astonishing for me to find a Saho speaking elder who lived in Hamelmalo, north of Keren, and he was fully assimilated Tigrayt speaker who talked to me in the local language for hours about my family; he seemed to know more about my family than I did.

As a child, I grew up near a mosque – very close – and I used to mimic and repeat Allahu Akbar after every call for prayer. My family’s best friends, whom I consider my families, as my parents raised me to call them, are Muslim Jeberti from the Anseba region, who lived close to our home. My mother’s best friend is a Mensa’a from Bet-Shehaqe, and Ad-Ibrim descendants. He came to our home town during the liberation war in search of shelter. He has lived there and continues to do so for the last twenty years. He would visit every now and then and stay with us, pray in our home, waking up early mornings for Fajir prayer. During the fasting month of Ramadan, my mother provided him food in the evening when he had to break his fast. He was fond of me and always affectionately called me “Wejje’, my son. His name is Omer, a very wise man, who recited verses and prayed for hours during the night. Sometimes I was annoyed because I was awakened by his nightly prayers, but my mother makes me shut up, she said I was disturbing his meditation.

Imagine all that is in a small traditional hut, where a family of ten lived, most of us on the bare floor, except my very young siblings, some of whom slept with my mother and others with my father. Omer used to sleep with us, among us.

I was lucky to have grown up speaking three languages, unable to differentiate between them, except rarely when I had to switch languages for one reason or another. For instance, when I speak Tigrinya, someone else might speak Blina, the yet another might be speaking in Tigrayyt. However, our communication was seamless; we exchanged ideas in a mixture of the three languages as if they were one language. No one was forced to speak one or another language and we didn’t (don’t) notice when we switched (switch) languages.

Our extended relatives include adherents of Islam and Christianity, all factions, including my own family. We enjoy the freedom to choose our religion — my parents are Orthodox Christians, I am a Catholic, my brothers and sisters profess different faiths. Surprisingly, I found relatives in the town of Nakfa, who lived in Rora, in the Sahel region of northern Eritrea—they had converted to Islam. In addition, I have very close families who do not speak Tigrinya at all, but only perfect Blina, and others who speak, only perfect Tigrigna.

My family extends to the Highlands of Eritrea, the in Zawil Kelkelti area, near Himbirti, Hamasien region, and to the plateau of Seraye and Akeleguzay regions—now, thanks to a document that was compiled in 1954, I am able to trace my family tree and its history,

When I was young, I attended a Catholic school, with children who had many religions backgrounds. All of us prayed together, it was part of the rule of the school—the same prayers, praising and thanking God.

I did my first year of technical studies in Nakfa and I used to study my class notes during the preparation for the exam, in one of the many underground rooms built during the armed struggle, I liked it because of its beauty, calm environment and its private study room. Every time I was there, I thought of the armed struggle, the energy that was exerted to build it, and about the freedom fighters who used to live in those underground shelters. I thought about the martyrs who paid with their lives to make Eritrea an independent country. During my stay there), I visited most of the historical trenches around Nakfa, including Mount Denden, Fidel Pe, Taba Dubbale, Farnello, and visited the Revolutionary School at Tsabra and Winna, the former technical schoo that was built) in1985. I visited the landmark of Nakfa, the Mosque that was left standing alone despite the heavy air and mortar bombardments.

Though I stayed in Asmara for 7 years while studying, I confess that I am unable name the major landmarks or mention street names. Some people from Asmara might find that funny, but I spent most of my time in my studies and competing with my peers. I had little opportunity to enjoy the life of Asmara, for one, I didn’t have the resources at all; I was empty pocketed, and rarely had 100 Nakfa in my pocket, which was my monthly stipend. But things started to change thanks to my profession that helped me land a part time job.

Furthermore, I was in Halhal, Sawa, Haikota, Mogoraib (where I met the Beja/Hidareb people during my summer campaign program, also known as «Forced Labor » I have been to Goluj, Sabunait, Gerset, Fanko, Tessenei, Alebu. where I worked as a site project engineer on several projects: Gherset Dam, Fanko Dam. The PFDJ’s construction company (Segen) knows who was there—it cannot deny I was there, my footprints are there–just check the Irrigation area and you will find my input there.

My first year of military training (13th round) was at Ghahtelay ; and I was a land surveyor in Filfil-Selemuna, during the construction of the road that runs along the Green Belt to Metkel-Abet. Sadly, I was also a member of the team that surveyed the road that lead to Ella-Ero–I had no idea why they were constructing that road in the summer of 2001, but now we know the regime was constructing the road that leads to the secret and notorious prison where the G-15 and many other political prisoners, are kept. Thereafter, I was in Shieb-Gedged, (the site where 400 innocent civilians were killed) as a project engineer for the seasonal road that joins Sheib to Afabet.

Turning to the highlands, I was in the environs of Adi-Keih constructing a micro-dam in Berhinet. And that helped me learn the wisdom and the great culture of the people there: Berhinet, Hawatsu, Mendefera. I traveled to Mendefera very often because my brother was imprisoned there—he was imprisoned because he absconded from his unit. During my assignment in 1996, I spent the summer in Arreza, Seraye, where I was exposed Kuda-Arreza, and enjoyed the best Suwa made of Dagusha. I visited Mai-Dima, the Dembelas and Kohayin Plateau and was mesmerized by the wonderful grazing pastures.

In Barentu, I saw the Kunama people who are cornered outside the town-center where all the new buildings are occupied by rich Highlanders who owned most businesses. I saw Kunama families living in small houses, just like they did many centuries before and I admired their beauty and their honesty.

In Ka’alay, a midway between Akordat and Barentu, I saw the rich and vast pastoral lands that are mostly inhabited by the Nara people. In Akordat I visited the beautiful Mosque, Hospital, and the old market place close to the Barka River. But a little up the road, I found the heart wrenching town of Engerne, where I witnessed the once prosperous place, now a destroyed agricultural town that boasted many Banana plantations.

When we got married, we had our honeymoon in Massawa where we enjoyed it with my wife: mostly Tigrinya speakers, empty streets, closed port and no ships in the docks. A little up the road to Asmara, I stopped at Gindae and enjoyed its beautiful climate and tasty tea. In 2000, I marched from Ghahtelay, following the railway lines that run from Demas to Gindae, a landscape that is surrounded by high mountains that were once battlegrounds during the last phases of the independence war, Ginbar Gindae (Gindae Front line). I crossed Gindae at midnight with dim lights of the stars, all along Durfo, Arberebue, to Bet-Gergish, a 24-hour foot journey from where we were ordered to return for an urgent military training during third offensive border war with Ethiopia that stopped after Algiers Agreement.

During my visit to Assab in 2007, I observed the once a flourishing port city turned into a ruined city with empty streets populated by vultures. I also gained exceptional experience that enabled me to know about the Afar people and the Dankalia region, and the misery they are going through, their suffering left an unforgettable memory in me.

My bio shows the following: I was trained in Nakfa to be a PFDJ cadre; I taught engineering for six-years at the Hamelmalo College; I had valuable experience gained, both in the academic and practical fields. Now, I am a trained Local and Traditional Food Developer and I am fond of food and food cultures.

For the last four years, I have lived in China, France, Italy, Romania, and Spain. And now, I am here, thanks to Awate University, which has extended its hand without any precondition, welcoming the exchange of ideas with great and noble people like you,

All my life experiences have helped my convictions evolve, and I strongly embrace the fight for justice, with full conscience and awareness. I value Peace, Freedom, and Justice highly. And I base my convictions on the history of our collective identity, to achieve absolute JUSTICE. And I am guided by these convictions when I write, express my feelings and emotions, debate, discuss, sometimes fight or react, and enjoy a normal life as a human being.

My reference is the Love of the Human beauty, and I remember God, the Creator of all, to bestow wisdom on me. Because I believe wisdom is the light that helps us avoid falling in the pit of darkness, by differentiating the good from the bad—and we should shun the bad and follow the good.