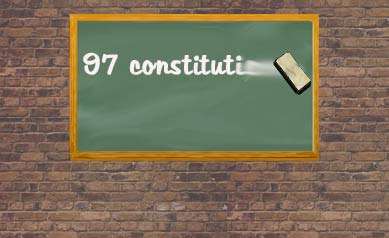 On May 24, marking the 23rd anniversary of Eritrea’s independence, President Isaias Afwerki had this to say near the conclusion of his address:

“Within the framework of our tasks of nation building, the political infrastructure assumes a vital role as a vehicle to advance our overall objectives. We have gleaned important lessons and experiences from the hostile external schemes aimed at derailing our nation-building endeavours and processes. I would thus like to announce on this occasion that a constitution drafting process will be launched in order to chart out the political road map for the future governmental structure.”

There are four questions related to this:

(I) We already have a constitution that was ratified in 1997; why is there a need to announce the initiation of a process to draft a new one in 2014?
(II) How is the future constitution going to be different from the 1997 constitution?
(III) For the last 14 years, we had been told that all talks of constitution are an indulgence as long as Ethiopia occupies sovereign Eritrean territory. What has changed?
(IV) What now?

I. The Justification for Killing the 1997 Constitution

It’s Christmas 2012 and two individuals who go by the obvious pen names of “Asaminew Ewnetun” and “Aradom Fedai Haqi” pen a “review” of Dr. Bereket Habte Selasse’s books and generously distribute them to all his colleagues. We need not go into the details of their review as awate.com wrote a review of their review and published it on February 2, 2013 (See: https://awate.com/reviewing-the-reviewers-in-defense-of-bereket-habte-selassie/) What matters here is the clues they gave us that Isaias Afwerki had passed a death sentence on the 1997 Constitution. This makes sense only if you accept (as I do) that “Asaminew Ewnetun” and “Aradom Fedai Haqi” are senior members of the Isaias Afwerki regime and, if they are not, they are its messengers.

Here’s the clue they had given us:

“However, while other members of the Executive Committee maintained the highest level of moral and professional integrity that was expected of them, the Chairman had, unbeknownst to them, fatally compromised their autonomy and the legitimacy of the Commission and may have irreparably damaged the future of the constitution.”

Stripped of all its hyperbole, the argument of AE and AFH goes something like this: the Executive Committee of the Constitutional Commission of Eritrea (CCE) was made up of (1) Dr. Bereket Habteselassie (Chairman), (2) Mr. Azien Yassin, Vice Chairman; (3) Mr. Zemehret Yohannes; Secretary; and the following members: (4) Dr. Amare Tekle, (5) Mr. Idris Gelawdios, (6) Dr. Seyoum Haregot, (7) Ms. Amna Naib, (8) Ms. Zahra Jaber, (9) Mr. Paulos “Ba’Atai” Tesfagiorgis and (10) Mr. Musa Naib. Since 2001, none of the living members of the CCE had anything to say about the absence of constitutional governance in Eritrea because the CCE was duty-bound to be above politics and be autonomous. None except for Dr. Bereket Habteselassie who not only wrote highly-critical articles of Isaias Afwerki but also fraternized with those who want the 1997 constitution amended and revised or annulled. Therefore, he has “fatally compromised [the CCE’s] autonomy and the legitimacy of the Commission and may have irreparably damaged the future of the constitution.”

With his one-sentence announcement, Isaias Afwerki is saying, “you can remove the ‘may’ and conclude that the 1997 constitution is irreparably damaged and I have to start all over again.”

Of course, this is an absurd argument. In Article 25.5, the 1997 Constitution calls, on all citizens (Dr. Bereket and the entire CCE included) “to respect and defend the Constitution” and, in fact, it is all the other living members of the CCE, including all its commissioners, that have done nothing to show their respect for and defense of the Constitution since it was ignored. All except Dr. Bereket Habteselassie and Paulos Tesfagiorgis. So, Isaias Afwerki and the Isaiasists are turning the argument on its head.

The 1997 Constitution had become the cause-celebre of dissidents and the PFDJ had no answer as to why it is the only African country without a constitution. Now it can say that it is “in the process” of drafting one and the process may follow the tortoise-pace: a year, three years, five years and the answer will be that they are writing the constitution from the ground-up and ensuring “participation.”  But why? What has changed?

Well, let’s ask Asamnew and Aradom again. They allow for the possibility that Isaias Afwerki has changed, but they don’t think the change is abrupt but evolutionary:

“It is inconceivable that the personality of a leader, especially a young revolutionary leader, will remain unchanged for decades in spite of inexorable changes, problems and ordeals that are integral components of any revolutionary struggle. His training in revolutionary theory must have molded practice, but experience too must have molded theory. To this are added the vagaries and vicissitudes of struggle as well as relations between, and within, parties and groups. This will have had impacts not only on the development of skills but also on his character.”

Here’s the argument: Isaias had to change because his perception of the world had changed.  The world is not as fair or just as he had believed and he is pleading “lewahnet” (naiveté): We did this (1997 constitution) in good faith and now it is being used against us by our enemies.  So what is likely to happen? How will the future constitution be different from the 1997 constitution?

I am, obviously, speculating here but I would imagine that the process will be more exclusive than it was for the 1997 Constitution whose process was begun in 1995. The 1997 Constitution had Executive Committee members that included former executives of the Eritrean Liberation Front (Azien Yassin and Idris Gelawdios); it had a member that worked for the United Nations (Seyoum Haregot) and it had members that were on the periphery of its doctrines (Bereket Habteselassie and Paulos Tesfagiorgis.) That, obviously, is not going to be repeated because we have learned of “hostile external schemes aimed at derailing our nation-building endeavours and processes.”  The new CCE will be made up of people who check mark all the boxes: how loyal were they to Isaias Afwerki, particularly since 2001? Had they shown any streak of independence? Is their worldview shaped by the prevailing view within the regime that the US is a force for evil? Are they collectivists? Do they think that civil liberties are a luxury until food security is assured and a middle class emerges?  You know: Dr. Ghidewon I, II, III…

Another contrast between the 1997 and future constitution.  Back when the 1997 constitution was being drafted, attending a meeting of the Constitutional Commission of Eritrea (CCE) was open: there were no requirements. Only those who, on principle, boycotted it couldn’t attend. Now, my guess is that the boycott will come from the Isaiasists: it will be a closed affair: and only those citizens “in good standing” (2% paying, and no black-list appearing) will be invited.  As Stalin once said in democracies what matters is not who votes but who counts the votes. Similarly, in the constitutional drafting process, if you can control the input, you control the output.

Back then, in 1995-1997, the PFDJ was interested in maintaining appearances—it wanted respectability in the West and it was praised lavishly for producing a near-perfect document. Now, it has no interest in placating the West and probably considers any praise by the West for any policy a kiss-of-death. My guess is that the articles dealing with civil liberties will be watered down and the balance of power between the citizen and the government will tilt heavily towards the government.  Not just the government, but the president.  It is not a coincidence that Isaias Afwerki described the future constitutional-drafting process as one that will “chart out the political road map for the future governmental structure.” There is no mention of the citizen or his/her rights.  Constitutional drafting is government re-organization.

I am not a lawyer but, I think, with the ratification of a new constitution all acts that were crimes based on the 1997 ratified constitution become ex-post facto laws. As Yemane Gebreab, the political director of PFDJ, once remarked, the 1997 constitution is in full-effect except for a few articles. The problem for him (more precisely, for Isaias Afwerki) is that those few articles deal with fundamental rights of citizens. If a new constitution is written such that all the rights of citizens are subject to many conditions (that only the government decides arbitrarily), then it is no longer a crime to arrest people without charges, to detain them for more than 48 hours, to deny them life and liberty, and all the other nuisances it enumerates in Articles 14 through Articles 17.  And you can’t hold the government liable for doing that between 1997 and the day the future constitution is ratified because that would be ex-post facto.  So, the future constitution is a “get-out-of-jail” card for the regime. In essence, they are saying: you in the opposition gave us no exit strategy and now we are writing our own.

The same debates we have had will continue, with one twist:

All of these are issues that are being debated at Awate’s Forum and they will (should) continue to be. They should be fleshed out—from the standpoint of morality and expedience. I think it is fair to say this: the opposition had believed that if you are on the right side of history, the right things will happen and it was fairly weak on the specifics (who? How? When?). The Isaias Afwerki regime had believed that you can out-wait, and out-last your opposition (“resolutely rebuff…”) because they will eventually get tired and give up, only to see the ranks of the opposition (pardon me, the “so-called opposition”) swelling to which it invariably answered “what opposition?” even as it was forced to have its meetings in secret and spent most of its time in a bunker mentality about its enemies.

The only thing that has changed is that the Isaiasists who were supportive of the 1997 constitution and were too cowed to call for it because it is not the right time now have been licensed (by the Tortoise Himself) that it is ok to say it was fatally flawed and compromised and we are going to write a pristine constitution.