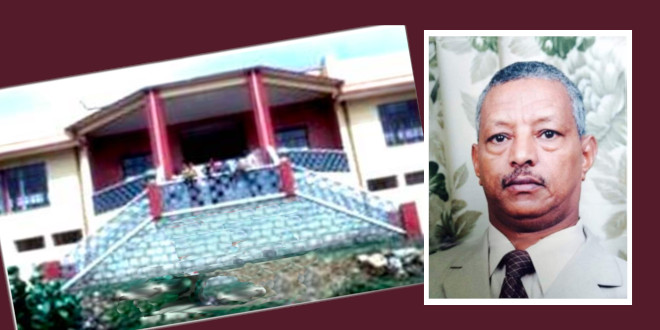 Another shocking news. An hour ago I read about the death of  Ustaz Osman in Medina, Saudi Arabia. He was one of my beloved teachers. Only six-months ago I dedicated Negarit 56[1] for his exceptionally courageous nephew, Omer, who died in Sudan. Both news were shocking and sad. Naturally, no one escapes death, but I am not sure if the circumstances Eritreans find themselves in, and the we are dealing with such calamities, can simply be described as sad. It’s beyond that and we feel it but fail to describe it sufficiently. In our case, the pain is doubled.

It’s just not natural that an entire people who saw each other decades ago, are separated by such a sudden deaths. Indeed, death is natural, but we as a people deserve to see each other at least once before the inevitable death arrives. We deserve to visit our elders and attend their funerals. Unfortunately, Eritreans have forgotten how it feels to meet each other like normal people. Can you imagine a family separated decades ago meet clandestinely in Ethiopia and other places. How can you understand that? You can only imagine that, vaguely, because one must experience it personally to fully understand it .

Every walking Eritrean has a story, I have one. The last family dinner I enjoyed was decades ago. And after decades of separation, we hardly see each other every ten or so years. It’s impossible to enjoy the company of your loved ones as frequently as you wish. My siblings and my mother are scattered all over the world. My father died almost 16 years ago and I couldn’t be by his bedside when he died. I couldn’t attend his funeral. My brother Abdulrahim[2] died mysteriously in Keren and I couldn’t attend his funeral. Many aunts, uncles, extended family members died thousands of miles away in Eritrea, a place I could not visit.

That  is what the tyrant in Eritrea has done to all of us. Our family ties has been severed and we only live cherishing our memories of them. Ww are living through a human tragedy that the tyrant doesn’t feel, or appreciate.

I am not sure how Ustaz Osman dealt with his extraordinary courageous and unruly nephew Omar who died last year. But he must have been worried about his safety all the time because Omar lived a dignified and dangerous life. Yet, I am sure he was proud Omar was his nephew. Who wouldn’t wish Omer was his brother, or son! However, he was close to many of us, to the many residents of Keren, even if he despised the reluctance and cowardice of a few of his peers. Omer belonged to the proud Omran family and I believe he grew older to resembled his uncle, the Ustaz Osman I knew. Character is stubborn and its genes insists on passing to the next generation.

Ustaz Osman was more than a teacher to me and to all my school mates. He was a stern educator yet a kind person. He looked after us in the trying times and he did his best to warn us of the dangers we didn’t recognize then. Yet, it seems he was more worried we would interrupt our education if we got in trouble. That made him anxious. But at the same time he wanted us to grow up into principled persons. His repeated warnings reminding us to be careful came with a hidden message. In sotto-voce he said, BE BRAVE, HONEST AND PATRIOTIC. That was Ustaz Osman, the man with the unmistakably deep, husky, and unique caring voice. Also, the way he squeezed my ears was unique, a fatherly, caring warning squeeze reminding me to be careful—and a conformation that he approved of our activities. May his soul rest in peace.  And may his family and friends, and students be bestowed with patience. AS for me, I will always celebrate the memories of my beloved teacher.

Here follows a few lines about Ustaz Osman from my book Of Kings and Bandits:

Gebrrebi[3] mocked the other teachers as mediocre: “Education would not pay without freedom. You must free yourselves first,” he said. He started his lecture with the French Revolution, then went to Simon Bolivar and Lenin; but he conveniently finished with hints about the Eritrean rebellion and “freedom from the feudal rulers of Ethiopia,” emphasizing the word freedom with a wrinkled forehead. He then mocked the biology teacher, “he wants to make butchers out of you!”

The students knew the risk of voicing any sign of opposition to Janhoi’s rule but Gebrrebi’s fearless character emboldened them. “Gandhi’s style is not fruitful. The type of aggression determines the reaction. Savages understand only power,” Gebrrebi preached in an angry voice. Then he gave his recommendation: “Emulate Hammurabi.”

Only Hailu[4], an equally revolutionary Ethiopian teacher and a close friend of Gebrrebi, would say similar things without fear. Until Jemal met Hailu, he never imagined there could be an Ethiopian who would speak ill of Janhoi. But unlike the serious revolutionary Gebrrebi, whose presence was very intimidating, Hailu was a calm and soft-spoken teacher. He quickly connected with the restless young students and spent hours with them in the teashops. By then, defiance and opposition to Janhoi had become quite common in the school compound. Even the librarian pretended he didn’t see the students exchanging banned rebel leaflets and manifestos in his library. Whenever he caught them putting leaflets between the books, he would affectionately wring their ears and whisper, “be careful, you donkey!”

The once secretive clandestine student association that supported the rebellion had become bolder. Three supposedly secret student cells operated in the school campus; their leaders openly collected financial contributions for the rebellion until the security officials clamped down on the activities and arrested the student leaders. Atzie Dawit, the school named after the barefoot Abyssinian emperor, became a breeding ground for young rebels. Jemal thought it should have been named after the director who lectured the students every morning before the flag hoisting ceremony, a forced ritual that he hated. The students were made to stand in line as the Ethiopian flag, that had a drawing of a crowned lion in its middle, was hoisted. They had to sing, “Oh, Ethiopia,” a song that praised Janhoi more than the country. Jemal hated a line that sounded like a prayer: “May God grant the king a long life, similar to Methuselah.” He made fun of the song until he discovered Methuselah lived for 900 years!