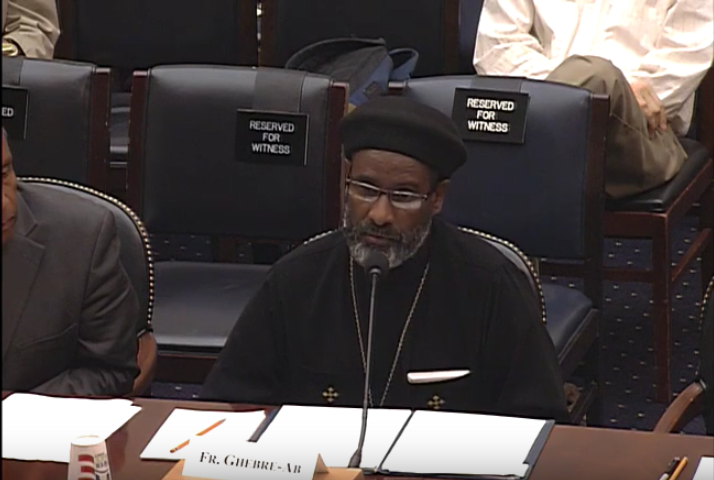 The Honorable Chairman Smith and members of the Subcommittee, I thank you for the privilege of being here today to give my testimony on the challenges Eritrea represents, and why failure to positively contribute in the resolutions of these challenges will affect the entire region and beyond.

My name is Fr. Athanasius Habtu Ghebre-Ab. I am an Eritrean-American and one who is deeply affected by events in Eritrea; a professor of history at the University of Cincinnati where I have taught for a quarter of a century; and also an ordained priest in the Eritrean Orthodox Church (ErOC). In the case of the latter, besides pastoring an Orthodox parish, I also serve as Director of External Relations for the Diaspora Dioceses of the ErOC in North America, Europe and the Middle East.

Although my own personal story is not and should not be the focus here, as I come before you to testify on the present situation in Eritrea, I believe that my multiple identity and life experiences shed light on the fact that they substantially inform my views on the subject at hand. Because I was born in Ethiopia where I spent my formative years, I am deeply touched by my roots there. But because my parents were of Eritrean origin and the country remains hallowed to me and my family because of my two brothers who gave the ultimate sacrifice for its independence, Eritrea will always hold a special place in my heart as well. Finally, let me say that I have lived my entire adult life in the United States, my beloved adopted country, the country of my children and the country that has handed me all its promises opportunities. Therefore, as I have often said, I am a child of these great heritages. And I am blessed for it.

I say all of these to make the point that I am pained by the general instability in the Horn of Africa, the unresolved conflict and animus between Ethiopia and Eritrea, which, in one way or another, remains at the very root of the instability in the region. One also can trace the untold and continuing suffering of the people of Eritrea and the dashing of the early optimism and hopes the world initially saw for this new country to the same root cause. It also pains me to see that the United States, a country which the people of the region – rightly or wrongly – have historically looked to as a reliant mediating power and still holds a huge diplomatic sway has increasingly shown reluctance to reengage with them in order to contribute toward bringing about a lasting peace in the region.

Please allow me to refocus my testimony to the main subject today – Eritrea – a country whose leaders presently stand accused of “crimes against humanity” by the most recent report of the UN Commission of Inquiry on Eritrea.

Eritrea has of late achieved the dubious distinction as the “North Korea of Africa” for establishing the most repressive regime the people have ever experienced. It has stripped the people of any semblance of the most primordial rights and subjected them to innumerable indignities. The country has no parliament. It has refused to implement the only constitution that its people ratified in 1997, five years following its achievement of independence. Mr. Isayas Afeworki’s government holds thousands of prisoners of conscience in its notorious prisons without so much as a semblance of trial. In fact, the country has no working judicial system to speak of. The government has closed all independent media and is known as a country that holds the largest numbers of journalist in prison as a ration of its population. Up to five to six thousand people, mostly the young, continue to flee the country each month for the past several years largely because of the policy the regime euphemistically refers to as “national service.” This is the most unusual policy by any country in recent history, requiring its young people to serve in the military for indefinite period without a living wage. This practice has actually morphed itself into the sort of human bondage – slavery – by the regime in an unprecedented scale. Today, the country, small as it is with a population of perhaps only five million, yet produces one of the largest number of refugees in the world. We have all witnessed the tragic death of hundreds of men, women and children at a time in the Mediterranean Sea as they sailed in search of safe havens in Europe.

Please allow me now to speak to you about one aspect of Eritrea’s egregious human rights violations, namely, its denial of religious freedom to its people, a subject of my expertise. And one point that needs to be emphasized here is that no faith community in Eritrea is spared the enmity and extremely heavy-handed treatment by the government. The following are but a few examples.

of the ErOC, H.H. Abune Antonios, was illegally deposed from his patriarchal throne and imprisoned. His only crimes were that he insisted that the government desist from interference in the affairs of the Church and calling for the release of prisoners of conscience. Although ninety-years of age now, he remains incommunicado. This was followed by the subsequent imprisonment of hundreds of clergies. With these and many other acts, the ErOC has been totally taken over by the government. Its every act are controlled by the Religious Affairs Department, an agency of the government, and those that represent its interests.

Today, it is estimated that between 2,000-3,000 people are in prison in Eritrea for their faith. The condition of their incarceration is as harsh as the thousands of other prisoners of conscience throughout Eritrea. Owing to this sustained denial of religious freedom in Eritrea, the US Commission for International Religious Freedom has consistently designated the country as one of the few “Countries of Particular Concern.”   At this critical juncture, the question that one must ask, therefore, is what is to be done to bring about stability to Eritrea and the region.

I ask you to take up the cause of a people, who, although so far away geographically from us, are nevertheless linked to us by their universal yearning: to breathe the air of freedom.

I thank you for this opportunity.