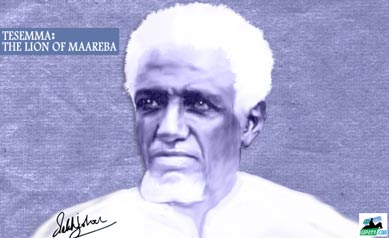 The history of Eritrea in the forties cannot be remembered without mentioning the Independence Block. And that cannot be mentioned without remembering Ras Tessema Asmerom. The independence block played an important role in the struggle against Eritrea’s unconditional unity with Ethiopia.

Tessema Asmerom, a member of the Akele-Guzai nobility, was exposed to limited traditional church education. Yet, he was much revered for his wisdom and intelligence. So brave that he was known as the Lion of Maareba, his village. Just like his wisdom has been exemplary, his wit was astounding. Folktales are full of stories related to the great man who is known for his generosity. Ras Tessema’s house was the refuge for the hungry and the helpless; it was the equivalent of a modern day charitable soup kitchen. It was common in the old days for the peasants to offer a big portion of their harvest to their leaders. Rich and able people would never visit Ras Tessema’s quarters without carrying a gift…mostly in the form of sheep, goats, cattle, milk and honey and the generous Ras shared his wealth with the poor.

A folktale about a poor woman who once walked to Ras Tessema’s house to be fed illustrates his wit. She had approached the Ras, who upon detecting that she wanted to say something, asked what he could do for her. She told him of a dream that she had. She said she dreamt of sleeping with the Ras and bore him a child. The Ras, in his usual wit, smiled and sarcastically told the woman to dream “achievable dreams”–the now common “Aqmekhen Helema” parable.

In the forties when the future of Eritrea was being debated internally and internationally, a naïve person is said to have approached Ras Tessema to give his unsolicited advice. “We have tried the rule of Shoa; we have tried the Italian rule; and we have tried the British rule, and all are not good; why don’t we try the American rule?” Ras Tessema smiled and told the naïve advisor that he should rephrase his advice and instead say ”We Eritreans have tried slavery under different rules, and they are all the same; we might as well try being the masters of our destiny!”

A traditional man, he excelled in the intrigues and diplomacy of Modern politics. The Italians took him seriously and tried to neutralize him by bestowing the title of Degazmatch on him. Later, the British Administration, faced with the same situation, bestowed the title of Ras on Tessema. Equally, in a feudal setting, the son usually follows the footsteps of the father; his son Abraha Tessema got the title of Fitewrari fom the Italians and later the title of Dejazmatch by the British.

Ras Tessema’s family was close to the Tigrayan nobility. In addition, he was a friend of Ras Seyoum Mengesha of Tigrai, the grandson of Emperor Yohannes IV. The relations with the Tigrai nobility was further strengthened when the Italians briefly occupied Ethiopia and annexed Tigrai to their Eritrean territory, thus creating “Grande Eritrea’’ or what came to be known in Tigrinya as “Tigrai-Tigrigni”. Ras Tessema was so much resentful of the “unjust Amhara rule” over Tigrai and feared Shoan Hegemony. As far as the Tigrai was concerned, to Ras Tessema, who was a strong exponent of the “Tigrai-Tigrigni” homeland, and to many people of his time, Tigrai and highland Eritrea was one social and geographical unit inhabited by one people, the Bhere Agaazi (the nation of Agaazi).

In 1947, Ras Tessema and some members of the Akele-Guzai nobility founded the Liberal Progressive Party (LPP) to advance their political objectives. The main objective of the party was to establish a homeland for the “Agaazi Nation”, the Tigrai of Ethiopia and Hamassien, Seraye and Akele-Guzai regions of Eritrea. As was evident from the Party’s ID card, the boundaries of the dream nation included most of the coastal areas of Eritrea, the whole of Tigrai with parts of Welqait and parts of Wollo. Ras Tessema believed that the region was part of the old governorate of Dejazmach Sabagadis, the early 20th century warlord, whose dominion was taken over after the death by the Solomonic Dynasty to which Haile Sellasie belonged. Initially, the LPP had an objective to establish a monarchy under the leadership of the descendants of Yohannes IV. It had entertained the idea of crowning Seyoum Mengesha, the grandson of Emperor Yohannes IV, as the leader of the Agaazi Nation, the Tigrai-Tigrigni region, or what the British called “Political Tigrai”.

After the defeat of the Italians, Tigrai was severed from the Italian-created “Grande Eritrea” and returned to the Ethiopian rule under Emperor Haile Selassie, while Eritrea was put under the British trusteeship and governed by The British Military Administration. The resumption of ruling Tigrai by “The Government of Shoa” was not accepted by many people, but mainly by the nobility from both sides of the Mereb River. Furthermore, it shattered the dream of establishing a state for the nation of “Agaazi,” the ancient name of the people of the region who founded the Axumite civilization.

In Eritrea, the unionists become stronger and the chances of an unconditional unity with Ethiopia was becoming greater by the day. Ras Tessema’s argument was that King Minelik of Ethiopia has sold Eritrea to the Italians and that Ethiopia doesn’t have any moral or legal justification to claim Eritrea after Menelik signed an agreement with Colonial Italy accepting the fact that Eritrea is not part of Ethiopia. Therefore, he believed that it is the responsibility of Eritreans, and only Eritreans, to decide the fate of their country.

As The United Nations Commission arrived in Eritrea to study “the choice of Eritreans for the future of their country”, international politics was on a serious deliberations and debates where representatives of different countries were at loggerheads protecting their interests. Immediately it became evident to Ras Tessema and the LPP that the idea of severing Tigrai from Ethiopia was no more attainable. Thus, the dream of the “Agaazi Nation” was shattered and the previously harmonious nobility on both sides of the Mereb was divided. Ras Seyoum shot the bullet of mercy to the dying idea of Tigrai-Tigrigni when he made his preference to a united Ethiopia; thus, he went to Addis Ababa and vowed his allegiance to Emperor Haile Sellasie. The LPP made major adjustments to its objectives and programs and started to redraw the Map of Eritrea, as we know it today. The renowned Weldaab Weldemariam became the major advocate for the independence of the Eritrean entity, a sovereign country of the Eritrean Nation. And the Newspaper that he published, Haddas Ertra, was considered the mouthpiece of the LPP party. The newspaper developed into a formidable propaganda tool and fervently advanced the idea of Eritrean Independence and emboldened the struggle against the agendas of Mahber Andnet, the Unionist Party.

As a result of the developments, intensive deliberations were held between the Rabita Al Islamiya, led by Ibrahim Sultan, and the LPP, led by Ras Tessema to counter the influence of the Unionists and to keep them at bay. The two parties approached other four small Eritrean parties to join hands with them to face the challenges ahead. All parties responded favorably and together, the six parties formed the Independence Bloc. Ras Tessema became the chairman of the Independence Bloc, while Ibrahim Sultan served as its secretary general. The Independence Bloc, popularly known it’s slogan, “Ertra n Ertrawyan” (Eritrea for Eritreans), become a formidable force and foiled the Unionist’s plan for unconditional unity with Ethiopia.

When the United Nations resolution 390 A was passed as a decision to federate Eritrea with Ethiopia, Ras Tessema was the only political leader who did not accept it. Other prominent politicians of the time, including Ibrahim Sultan, Weldaab Weldemariam, both from the LPP, Tedla Bairu and Ras Beyene Berakhi, both from the Unionist Party, accepted the resolution.

The resolution was considered a compromise formula by many because the two conflicting demands–that of total independence of Eritrea and that of unconditional union with Ethiopia–could not be satisfied at the same time. Ras Tessema publicly told the British governor that the UN resolution was in fact a verdict by the UN, never the choice of Eritreans. Refusing to elect or be elected anymore, Ras Tessema disassociated himself from the Eritrean Parliament and resigned to his village Maareba.

This brief introduction of the history of Ras Tessema was written by Saleh Johar and was published on awate.com on November 8, 2000.