“You Get The Leader You Deserve”? 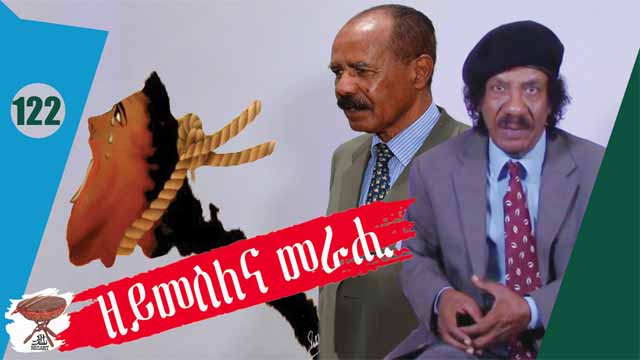 As Isaias repeatedly reminds us, we are still a primitive subsistence society, but he forgets his system has shackled us in that state unable to break free. But if he was a caring enlightened leader, we could have advanced incrementally, not regressed to where we are now. We are living in the state we lived many decades ago and ended up with a despicable government and leaders.

True, Eritreans are stuck in a primitive situation under a primitive government but they deserve a brutal leader. They don’t deserve a life of jumping from one war to another.

The world is witnessing the atrocities happening in Ethiopia, particularly in Tigray—it’s appalling to subject any human being to such cruelty where soldiers shoot wounded civilians to finish them off instead of giving them emergency medical care. Soldiers who lack basic humanity to respect POWs at a time the world boasts of the Universal Declaration of Human Rights and the Geneva Convention. I doubt if the soldiers know that such protocols exist, or were informed about the rules of engagement to sparing civilians in a war .

Bad leaders corrupt societies. Cruel larders spread cruelty among civilians and soldiers alike. How else would Eritrean soldiers put in jail underage children and watch them grow old in prison? Unfortunately, that is the bumpy road towards building a true nation state.

How did Italy manage to unite Eritrea as a state while the PFDJ couldn’t even keep what they found, properly? They argue that they united the nation by saying, “we died together.” True, but the PFDJ squandered the gains of the sacrifices. And now, 140 years after the creation of their country, Eritreans are struggling to rid themselves of injustice and the suffocating political culture created by the PFDJ. At the center of it is the issue of representation,

Eritrea had regions, now it has Zobas… what are the Eritrean zobas and what are their confines?

Eritrea is an East African country; any map shows its boundaries. It has no territories outside its known confines. However, a big chunk of its people lives in exile, in the Diaspora. Many are confused and unable to differentiate between their Eritrean origin and the current citizenship other countries they carry. Worse, many think their place of residence is an extension of the Eritrean territories.

For instance, if there is an election and two brothers live in separate places: Sweden and the USA. When it comes to representation, if the brother in Sweden is elected, does he represent his brother who lives in the USA? When it comes to geographical representation, where the Diaspora lives scattered everywhere, residence places are not Eritrean electoral districts. This confusion has contributed to more fragmentation among the diverse opposition elements.

Some individuals and groups extrapolated the Eritrean regions in the Diaspora. Thus, they deepened the division along regional and sectarian lines, and it is further exasperated by the lack of leadership that Eritreans suffer from. Of course, the major culprit is the PFDJ because it helps it extort money from the diaspora, that it considers a cash-cow, and to intimidates and blackmail many into submission. The PFDJ never left a positive influence that nurtures unity among Eritrean social components. On the contrary, it thrives in disunity to use its divide-and-rule tactics to weaken any opposition to its dictatorship. That is why Eritreans need a unity government…

Mature countries respect for the rule of law, human life, freedom. They have proper rules and regulation, proper legal procedures, courts, police, and court that monopolizes decision to punish citizens. etc. Absence of discipline leads to chaos, anarchy and damages a society. But we do not have any of that and that’s why we are in the quest for a democratic system in Eritrea.

This quest has no entry barrier, there are no verifications or screening in a popular struggle; anyone can join to integrity and honesty or can infiltrate and create chaos among the ranks. Some form parties but at a certain moment that should require laws and regulations—what is a political party? Do we have a law that regulate and license that based on a common understanding?

Chaos does not produce systems but will lead to the repeat of the PFDJ experience where there is no accountability or transparency. And that invites injustice, unfairness, corruption, nepotism and instability. Lives of citizens becomes cheap; parents lose their rights over their children and their properties and freedoms. In such a situation, a power vacuum certainly leads to bloody confrontations and clashes? That is where Eritreans inside Eritrea and the security forces bear the responsibility.

What should you do to support the unity government?

We need to do the following:

This is a call for all, the time of screaming alone, each from a different hill will never create enough echo or have an impact.

Who owns the Eritrean security forces and public services?

Finally, the Eritrean army is not a PFDJ army, but the rulers control it just like any tyrannical system. If anyone considers the Eritrean army an enemy, they are wrong. The army is not composed of alien individuals, but by Eritreans—except for the corrupt enablers of dictatorship, “they are us and we are them.” The opposition is against all sorts of injustice, particularly institution that must be restructured, purified of criminals based on universally accepted procedures in proper courts. Any hinderance to restoring the dignity of the citizens must be removed, obstacles to the development of the Eritrean spirt, entrepreneurship, hard work should be removed. No sweat should be she without compensation. No blood should be shed outside known, legitimate missions like protecting the land and its people as discussed and decided by dully elected representative.

That is the only way Eritrea can spread its wings and fly high… stay there with pride for all humanity to see and marvel at. It will be a reality, and the journey has already started… join the march towards freedom, peace and a time where the nightmares of the last 30 years become only a distant, disturbing memory that Eritrean will occasionally reminisce and laugh about when they compare it with their promising reality, living in fear-free, prosperous nation.