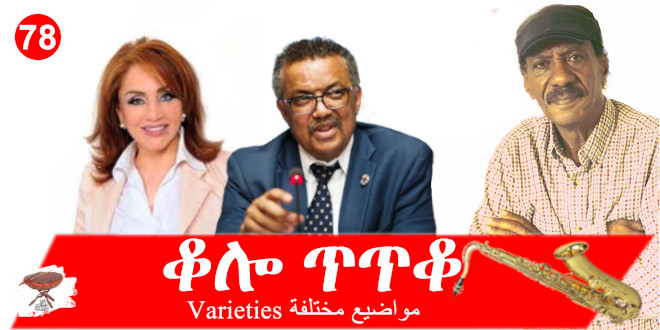 Many people do not like it when I say a language is either poor or rich, living or dead. If a language will not help us you attain a higher level of communication and expression, enable you to seek knowledge and be enlightened, improve yourself and your culture, then it is simply not good.

Even the deaf have a language. Even Parrots can mimic words and children who haven’t been to school yet, can communicate. So, what is the use of language if it doesn’t provide you an access to knowledge? What good is it if it doesn’t enrich your culture, literature, etc. That is what we need to think about.

If you are speaking in one language but you repeatedly use words from other languages to explain a concept, because the word you are looking for doesn’t exist in your language, that language is very poor. What’s does cultured or مثقف (Muthaqef) mean in Tigrinya? What’s is intellectual مهذب , متحضر (Muhadzeb, Mutahadir)?

Chab Khalid and his Di-Di, the two word song

In an article I read a few days ago, the Algerian writer AHlam Mostaghanemi lamented that the mediocre have become the face of the Arab world. Her own country, Algeria, used to be known as the country of a million martyrs, and was represented by the giant heroes like Amir Abdulkadir, Bin-Badis, Bin Bella, Jemila BuHred, and Hwari Bomedien, but now it is identified with Chab Khalid, the man who became famous thanks to his two-word song, Di-Di.

She says in the nineties she arrived in Beirut, Lebanon, when Chab Khalid and Di-Di was played all over the world, in fashion shows, weddings, parties, etc. She says people always asked her what Di-Di means and when she said she doesn’t now its meaning, they questioned is Algerians still speak Arabic anymore after they were colonized by the French. Ahlam says, taxi drivers, friends and strangers and a gas station attendant asked her about Di-Di. Finally, she decided not to tell anyone she was Algerian to save herself from the bothersome question. And she felt sorry a singer with a song of two-meaningless words was more famous than the real Algerian icons.

She adds, today Arab countries are defined or known by people who appear in and become popular through the famous show, Star Academy. Ahlam explained that many Arabs do not know Mahmoud Al-Sewarka, the Egyptian member of the resistance in the war against Israeli occupation who was caught and jailed for 22 years. Until a released prisoner testified that he was in jail with Mahmoud Al-Sewarka. Until then Israel denied his existence but finally in 1999 he was released in exchange for Israel prisoners.

But there was no one waiting for Al-Sewarka at the prison gates, not anyone from the people he struggled and for whom sacrificed for knew about him. A newspaper wrote about his release in a few sentences in a corner of the paper. On the contrary, the police had to smuggle Mohammed Attiya a Star Academy showman from the airport. Crowds kept coming to the airport to see Attiya for days whenever an airplane arrived from Beirut. When he finally there was a stamped and several of his fans were injured. Ahlam adds, countries that were once known by their heroes are now known by its boys like Mohammed Khellawi the student at Star Academy who moves around with five bodyguards.

And the writer says that she met Jemila Bu-Hreid, a hero of the Algerian struggle, in a flight to Qatar. Ahlam felt ashamed of the fact that Jemila cannot afford to travel first class, but a child just born in the stages of Star Academy boasts he doesn’t travel except in a private government planes, “because he highly popularized the name of his country!”

The Ego of some activists

Now, do you think about the heroes of our struggle? Do you about think where they might be and how they are doing? Do you know Suwera, a man who struggled all his life and then he ended in Sudan as a refugee, lost his eye-sight and still carried leaflets and whatever literature he can find to distribute it in the streets of Kassela until his death, a few years ago? So, be humbled. Those of you who pompously brag that you are struggling, you are sacrificing, you will be forgotten. No one will remember you. All your bickering, no one will be grateful to you. You will be lucky if you find a two-word entry about you in any historical book.

In this time of Corona, remember to humble yourself. You wouldn’t even get a decent burial; three people will throw you into a hole and that is it. Only your loved ones will cry, your friends and close associates. But then they will move on and in a few years,  you will become a hazy memory, remembered on occasions and maybe people will talk about you for a minute until they shift to another subject.

Those of you who want to shape Eritrea to your image, cutting this piece, pasting it to another and forming your glorious fascist state, or your fence of a sectarian enclave, pretending it’s all for the people, no one will be thankful to you. You will be remembered as a psychopath, vulgar, and an ignorant fire starter. Even your relatives will be ashamed to admit they knew you because your history will be a liability to them. Go ahead, gloat, exterminate a race, erase a sect, burn a region, insult Eritreans, disrespect martyrs, belittle Eritrea for which so much was paid, and still is being paid, but remember you will be a faded footnote of history. Who has come to boast about the killers of Ona, Besekdira, Wekidba, Msyam, Hergigo, Sheb and Hazemo. Who will come out and boast that he is proud of his treasonous relatives?

You get the idea.

In Solidarity with Dr. Tedros Adhanom

Tedros Adhanom; not much to say about his but a disclaimer: I have two incidents for which I will not forgive him. A disrespectful bigoted remark he made in a meeting in Tigrai and a noble initiative he threw under the table not even the decency to reply. But I must say that I stand in solidarity with him over the attack he is facing from the racists of the West, and the dimwits of the PFDJ. Tedros plays the ugliest musical instrument there is. I prefer to listen to a donkey braying that the sound of that instrument. He plays the saxophone. And if he can stand the sound of that ugly instrument, I am sure he can tolerate the equally ugly slurs he is being subjected to. If those who are afraid, they will be black and always carry umbrellas, not word off sunstroke or something else, but so paranoid they are afraid their skin-color will darken, racial slur is the understandable. Do what you do best, and in this trying time, incompetent leaders are not qualified to attack you—be they white, yellow, brown or even the color of Avatar.