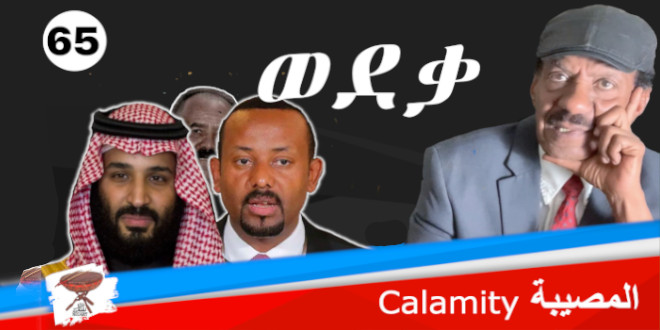 This is the source for my youtube video, Negarit 65.

I have one (and similar) problem with the Saudi Heir-apparent and the Ethiopian prime minister: their support of Isaias Afwerki, the tormentor of Eritreans. I have talked enough about prime minister Abiy Ahmed, not much about Prince Mohammed, who is the main figure for today’s episode.

I am fully behind him in taking on the reactionary Wahabi establishment that has created schisms among the Muslims themselves and the world at large. The petro-dollar powered influence of Wahabi tradition has wreaked havoc all around the world. It succeeded because its primitive, anti-modernity sermons always came veiled with religion, and it corrupted the tolerant and pious type of religiosity that we grew up with.

The topic is so vast it is impossible to explain in a limited time, but I will try to summarize it by presenting samples and anecdotes hoping it will help my audience to think about the cause of the crippling problems that we are suffering from since the 1980s. True, it did start a long time before that, but its full impact on Eritrean Muslims started appearing since then.

Wahabi clerics preached antiquated customs as if not abiding by them was apostasy. Playing cards was considered sinful. But now, converted preachers are busy shuffling playing cards in public. What a hypocrisy! They preached that religion doesn’t allow women to drive, some even went as far as claiming it damaged a women’s womb, affecting her ability to bear children. Now the authorities adopted a different view, and magically, religion allows women to drive. Songs were considered Haram, so was dancing, so was smiling. They taught, “a good Muslim shouldn’t smile” as if a Muslim doesn’t have a natural instinct to smile. Incidentally, that teaching is contrary to the common advice of the prophet who considered smiling an act of charity, Sedeqa. Thus, they display mean-faces as if ready for a fight. Even the innocent drum was defamed—what the Arabs call Dhaf, the one sided tambourine, was Halal, but the two-sided drum that all Africans use was mysteriously branded as Haram, not allowed. In Islam, as we in Eritrea know it, Slaat ArriHim, blood relations, are very dear. That relation was severed badly in the last few decades. There are many who couldn’t visit their relatives due to the male-female segregations.

I respect personal choices. If one doesn’t want to meet men or women, it’s their choice. I even believe if people do not like to see a white painted wall, they are free not to go in a room with white painted walls. But it’s only their individual choice and they should not force their opinions on others simply because they are co-religionists.

Now, how is it the preachers of yesteryears jumping and shaking to Western music  they used to call MJOON, in concerts? Did God send us a new book? A new set of laws? What happened for them to switch 180 degrees and disown all that they have been preaching for years, scaring the faithful with the anger of God?

We also have a dress code problem—some people who don the Bedouin Eqal and Ghutra consider themselevs an authority on religion and every Muslim should obey their edicts.

A few years ago, in Sweden, I met an Ethiopian who had just returned from home. His friends gave him some money to carry in support of a school in their neighborhood. One early morning he walked to the school to meet with the administrators and found students walking to school. He said, the students stopped when they got closer to the school, opened their bags, and pulled a ghutra before entering the school compound. He wanted an explanation and the students told him they have to put the ghutra, what they were told was a symbol of Islam, before entering class!

How did the ghutra become a symbol of Islam? It’s just a rug, and even the prophet didn’t know it because it was not known in his time. At that time, the Arabs wrapped a cloth around their waist, that is it. Let’s see what the eqal and ghutra is.

The ghutra is a piece of cloth that they put to protect their hair from the dust, and their head from the heat of the sun. The eqal (meaning a restrainer) is a rope they use to restrain the knee of a camel when it is parked. When they move again, they would pull the eqal out of the camel’s knee and put it over the cloth on their head. They use it later on when the camels have to be restrained again. How could a rope and a head-cover that’s relevant only to the Bedouin of Arabia, a fraction of world Muslim population, become the cultural defining item of 1.6 billion Muslims. Many Muslims do not know this imposed tradition though many have camels but never developed the habit of using the eqal. We have our own version of Islam that we adhered to for 1400 years ago.

I understand that such a topic is not easy to explain in such a brief manner. But I am hoping what I present will trigger others to think about it, to educate themselves and their surroundings, and to help preserve their faith in a correct manner. Muslims should not discard their beliefs for anything because they were not pagans and the Wahabi teaching is not epiphany. Muslims have always been religious.

Preachers who would help us be better persons are badly needed, preachers who would propagate good citizenship, promote the maintenance of and protecting humanity, and influence individuals to become thinking rational people. But those preachers whose topics are limited to “this is Haram and this is Halal” on everything, on our entire life, should be rejected. And I wish they face more of the likes of Mohammed Bin Salman.

But this is not our only problem. We have a similar reactionary habit within the followers of Orthodox christianity.

Let’s say Islam was introduced to Abyssinia by the Arabs. But many within the Orthodox think Christianity was founded in Axum and that is why Muslims in Tigrai are not allowed to have a mosque in Axum. They can’t because the Wahabi version of the Orthodox believe it’s a holy city, and if building churches is not allowed in Saudi Arabia, why would Muslims ask for mosques in Axum! However, they forget the Muslims in Axum are citizens of the land, they are not foreigners…why should they be considered responsible for the Saudi legislation? Should they deal with the Saudis instead of denying their citizens religious freedom? And here, this kind of bigotry is what scares Eritreans the most. And all of that is happening in 2019—no, it’s going to be 2020 in a few days.

So, just like the Arabs introduced Islam to Abyssinia, the first bible was in Greek and the Alexandria region of Egypt had a Greeko-coptic civilization during the early days of Christianity. And it was the main region that spread the teachings of Christianity Abyssinia. Even the term Orthodox is Greek. And that is why all Abyssinian Patriarchs and popes carry Greek names and the bile was translated to Geez mainly from Greek.

So segregating faiths based on the distance of their origin is irrational. Wherever the origin of a religion, if accepted by the people, it becomes part of them. If not, what are we going to do with the Jehovah witnesses, the Pentecostals, the Bahais… are we going to tell them you are new therefore you do not have any rights to be what you are? Of course, when Islam is treated that way, even Protestants and Catholic, will also face the same predicament, they will all fall prey to the bigotry.

Most of our problems can be traced to the Solomonic dynasty. Until the time of Haile Selassie, the last of the Solomonic kings, they ruled for about 750 years. They haven’t introduced any significant project that helped enlighten the people. They were all about wars and bloodshed, and about spreading ignorance.

Our region didn’t know shoes until about a hundred years ago—including Saudi Arabia, Eritrea, Yemen, Sudan, Somalia, Djibouti, Sudan and Ethiopia. What is  considered an Abyssinian national dress, Ejje-Tebab, the Jodhpur, was introduce by Indian Banyans during the reign of King Tedros. At first it was the dress of the dignitaries only, beyond the reach of the common peasants who couldn’t wear it until the price of cloths (Abu-Jedid) became affordable.

Finally, I have come to a conclusion that the nature of our predicament, and the source of our political and other problems, is cultural in nature. Until we recognize that and come . to terms with it, we will not find an answer to our weaknesses in solving our many social, economic, and political problems. So, instead of being frustrated by the lack of results for our tough struggle, we have to face our shortcoming. It’s our cultural backwardness that is freezing us in where we are.