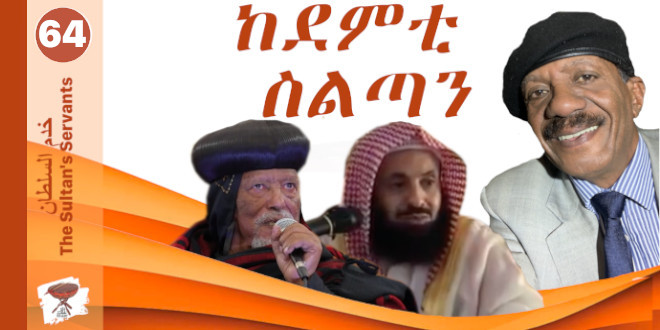 The following is the source for Negarit 64  at Youtube channel

* Are divine beings Hitmen, Askhker, or a militia army?
* What is the smallest unit of a society? Can we respect and  care for a society if we do not respect and care for the individual units, be it large segments or citizens?
* What’s the much abused meaning of “Liberal Democracy”!

I am sure you have seen Mafia movies and read stories of criminals and organized crime syndicates. Usually when the boss wants to punish an individual, to silence others, to make an example for the society to fall in line, he orders a brutal follower to go and kill a certain individual. The servant carries the order religiously.

In countries with some semblance of rule of law, if the culprits are caught, they could face punishment. If not, they can continue wreaking havoc in the society because they are protected by their fellow gangsters and their criminal organizations.

Now, we see people who claim to be religious, praying to God to finish off a certain segment of a society—anta Amlakh, gb abellom, aTfaayom, etc. Strangely, they expect God to listen to and respond to their evil prayers. They think they have a hitman sitting in the sky to do their bidding. I wonder how people conceive a criminal act and expect God to execute their wish. What kind of God do they worship? A killer? A brutal being waiting for their instructions?

I do not want to go into the metaphysical or spiritual aspects of prayers, wishes, … and how we perceive they will be accomplished. But I have no respect for ill-wishers.

Human beings explain the prayers in many ways, some palatable others not so. For example, one explanation is, that if people face draughts and they pray for rain, they supplicate, such a state of mind creates a positive energy that makes people less violent, less unfair, and a little more just. In such cases, prayers could be answered (this doesn’t concern the atheists because I am talking about the majority of our people who are believers)

INTERMISSION: many people asked me where they can my book “Miriam was Here”. Now you can find the Tigrinya translation of “Miriam was Here” at semayat.com, a bookstore owned by an Eritrean.

Last week a priest was attacked while praying at the door of a church in Tel Aviv, Israel. No one should doubt his commitment; he woke up early to pray alone, believing that God will listen to him.  Then some gangsters attacked him, they brutally stabbed him nine times. He didn’t even try to defend himself, though it would have been fruitless since it is difficult to wrestle three young blocks, one of whom looks like the Wall Street bull.

I am not sure of their motive, but I can guess they were defending a sort of a church with a regional god, or a partisan, or a sectarian god. Probably they think it is fine to kill a human being for the sake of their “cult god”!

We see people wreaking havoc in societies believing they are doing god’s bidding. They expect to be rewarded by god because they protected Him, His church, or His chosen segment among the people—the others do not belong to God! And they expect to be accepted in heaven in the afterlife.

Speaking for myself, I do not want to be in a heaven together with such people—they can live there alone. I do not share their belief in the imaginary being they worship because the god of their illusion is not the god that sane believers worship.

Some of you either believe in the Darwinian philosophy or that your ancestors were Apes. Good for you. Abrahamic religions believe Adam, the man that God created of clay, and Eve, who was created out of Adam’s rib bone, were the ancestors of all humanity. In both cases, the Adam and Eve family, or the Ape family, grew to 7 billion human beings in our time.

In the beginning, human beings needed food the most and gradually they evolved from hunter gatherers to settled communities, clans, tribes, and “Ethnic Groups” as the per the PFDJ “holy book”, and finally reached the era of nation states. It was only through enlightened philosophies that human beings started to respect and care for one other. People who recognize that the basic element of a nation state is the individual citizen, have prospered. Those who didn’t respect the individual, are still lagging behind.

Modernity requires that all units of a society are recognized as having equal stake, rights, and obligation. And they are rewarded, or otherwise, based on a legally defined, agreed upon criteria—in this case, a codified law or the constitution as a sort of a social contract. Now let’s remember there are people bogged down in primitive thoughts and they contemplate a nation state under the supremacy of a group that they feel comfortable with. But different people have different comfort zones which might not be in sync with the comfort zone of others. A never-ending cycle of confrontation starts and that is where we (and most Third World countries) are in. Worse, unenlightened societies, with brutal leaders, fail to grasp the tested path of success that has helped the West reach to where it is. Primitive, crooked paths have kept other nations in backwardness, never-ending destitution, and want–even if they are endowed with enviable natural and human resources. The main misfortune is that the insane become leaders and advance primitive thoughts that do not relate to the present, at all.

The basic foundation of a nation

Let’s see two example that influence many people. A Muslim and a Christian example. Both so-called religious leaders are the same and they are the main culprit of the destruction many countries are living through. The two want citizens to be loyal servants of the ruler, preaching blind obedience to the ruler (guardian) “even if you see him on television while fornicating and doing anything for half an hour.” The importance of the citizen is not in their mind.

Another one says, leaders are elected by god, it is His wish, and disobeying the leader is disobeying God. We know that Abyssinian kings carried the title “Elect-of-God”, a twisted view that has corrupted the culture for too long. Here also, the importance of the citizen is not in the mind of these so-called priests and sheikhs.

In a nutshell, that is what ails our society because we give so-much importance to dishonest “religious leaders” most of whom are illiterate, primitive, corrupt, cowards, and selfish. We have to reject such destructive preaching that’s been going on in our churches and mosques every day. These people are not qualified to talk about compassions, alms, kindness, and the basic religious values let alone modern politics. And we have to find our own way, far from the corrupted teachings of these people.

If a citizen is not respected, the entire society collapses, and though corrupt and paranoid leaders, and impressionable societies attribute their failure on others, mostly on foreign intervention, it’s their own failure. People also attribute their failure to the anger of God—don’t the holy books say, do you part and God will help you?

Humanity should not be brutal and when a crime or injustice happens, they claim it is God’s wish. It’s your deed because, as most believers know, people have minds inside their skulls and they are responsible for the good and the bad and bad decisions and deeds in their lives.

If you disrespect and abuse a citizen, the entire edifice of the nation falls apart. As delicate as it is, the basic building block of a prosperous society, or a nation, is the individual, the citizen who should not be abused at all. That I believe, is the way to prosperity, stability, and a good life. It’s the only way that leads a nation to a prosperous, rational, and successful life. And that, can only be achieved through a secular system where people govern themselves and do not use the divine being as a scapegoat.

According to the democratic peace theory, “liberal democracies do not wage wars against one another.

So, those who want to secure the superiority of their group, sect, ethnicity, or any other segmentation, promote religion as a main collective mover, do so on their own. Don’t  ever claim it is the wish of God. The rest of you, think of what ails our society and find the answer on your own.