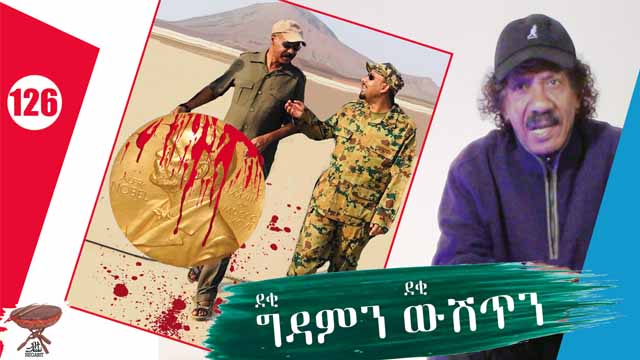 “I and my siblings against my cousin, I and my cousins against a stranger.” An old Arab clannish saying.

The above saying doesn’t promote a principled support of what is right and rejecting what’s wrong but reinforces clannish mentality. It is good to support your relatives provided it is to convince them to cease their wrongdoing. However, if it’s to encourage them to continue their wrongdoings, you become a culprit. How does that apply to our compatriots, the PFDJ members?

The PFDJ leaders and their supporters have always been militantly partisan and never abandoned their habit of boasting about a victory in 1991. Worse, thirty years after Independence Day, they are still trampling over the rights of citizens while bestowing all noble attributes on themselves and branding anyone who disagrees with them, as traitor, unpatriotic, and a host of other defamations.

However, as human beings their conscience must be occasionally hurts them when reflecting on their behavior. Unfortunately, they haven’t showed the morale courage to admit their mistakes and never acknowledged their wrongdoing. Regardless, many Eritreans have been calling for reconciliation for many years with no success.

There is a fake type of reconciliation embedded in region’s culture, Afa Allah An Ma Selef (let bygones be bygones). However, unless there is a genuine reconciliation, no resolution of differences, and wrongdoings will never be bygones.

In village or tribal council meetings, the wronged get a chance to air their grievances, leaving nothing in the heart. No one interrupts them until they say everything in their mind. Thereafter, the other party will have a chance to make either a counter argument, or a statement, accepting their mistakes. Finally, after hearing the arguments of all sides, the council makes a d decision, and orders reparations, compensations, a simple apology, or a settlement of sorts. The decision of the council is final, and no one dares to cross it. If anyone dares to disobey the council’s decision, a serious punishment awaits them—they can even expel them from the community.

That is a real reconciliation; let bygones be bygones is a fake reconciliation that leaves the grievances alive under a flimsy veneer keeping the risk of a confrontations alive and clashes might erupt anytime.

What are the grievances against the PFDJ and its supports?

The grievances are too many and it’s impossible to detail them in a single occasion, but I will raise a few. But many Eritreans are willing to forgive the  mistakes, if only the PFDJ would reciprocate by simple gestures of goodwill. Here, I will focus on the last three years.

When Abiy Ahmed came to power in 2018, it was clear his goal was to revive the ancient Ethiopian imperial ambitions. To that end he surrounded himself with warmongers, violent leftovers of past regime who caused much suffering and damages on the region. Unhindered, they wreaked havoc on the region for centuries, and for three-decades on Eritrea.

If Abiy had pursued a wise strategy to reconcile inter-Ethiopian feuds, I would have been the happiest person around because I wish to see an Ethiopia at peace with itself and at peace with its neighbors. But disappointingly, Abiy cemented a personal relation with our tormentor and became a collaborator with Eritrea ruler. No one is sure who the engineer of the recent jointly pursued bloodletting in the region is, but it appears. Both Abiy and Isaias wanted it and they ignited costly conflicts that doesn’t seem to cool off soon. Abiy managed to elongate and complicate the sufferings of Eritreans. I and a few others aired our fears and the usual culprits, the PFDJ groupies, considered us anti-peace and anti-Eritrean elements.

On the other hand, the PFDJ and its supporters accepted Abiy as a peacemaker and a messiah of prosperity. To us, however, his imperial ambitions were becoming clearer by the day while some people became overwhelmed with excitement and joined Abiy’s elementary Medemer formula. Worse, they made accepting or rejecting Abiy’s Medemer formula a litmus test with which they measure the loyalty of Eritreans towards their people! Abiy’s sweet-talk has mesmerized the, until recently!

The incursions continued because Isaias gave Abiy full authority over Eritrea and volunteered to be his follower—a shocking statement from a leader who pretended to be too obsessed with the sovereignty of Eritrea. But his undiplomatic and crude behavior embarrassed many Eritreans.

The simpletons among us were excited when some Ethiopian merchants brough in a few sacks of hops (gesso), metal roofs and other low-grade materials into Eritrea. They  thought it was a sign of a soon-to-flourish economy while the cartoonish diplomacy continued. Chest beating and bravados continued. Clownish giggles to crazy public dances in different cities, to wrapping themselves in Ethiopian flags continued. And we are at a far worse situation than we were in 2018.

Abiy’s ambitions would have been a usual letdown had it not been at the expense of Eritreans. Alas, it was all for the benefit of a few fringe groups who made Eritreans weep blood for years. But the Ethiopian official statements continued to be aggressive and disrespectful as exhibited in the last official Ethiopian statements.

A week ago, Dino Mufti, the spokesperson of the Ethiopian ministry of foreign affairs made an insulting statement which awoke many Eritreans from their slumber. Ironically, some of them had said nothing when Isaias himself made a series of offensive statements since the summer of 2018. But this time, the reaction of a few PFDJ’s members to the statement by Dino Mufti was surprising (though an established trend of foolishness). But regardless, the reaction was a magnificent show of solidarity with the cause of the beleaguered Eritreans. I wish the PFDJ groupies had not waited until the blows became too painful to change their position. And I think the PFDJ groupies need to do the following changes:

Today, if we had a village council and I was to present my grievances, I will ask for nothing but for the PFDJ to acknowledge its mistakes and a promise to straighten its twisted path, just for the sake of the beleaguered people. Short of that reconciliation, remember they are exposing Eritrea to greater dangers, and anyone who sees that and ignores it, is a culprit in any calamity that befalls the country.

Is that an unreasonable wish? Isn’t that what any person who loves his country should wish for? Isn’t that the responsibility of all Eritreans? Are they going to heed the advice or reject it as they did for decades? Will they resist the urge of imitating the life of feathers that the winds carry to all directions?

It’s time the PFDJ showed some humanity… and some dignity. Correcting their path will help make things better for Eritreans.

At the end, nature has a way of dealing with predicaments though it could be in the form of an earthquake. It’s upon Eritreans to prevent unpleasant earthquakes from hitting Eritrea. It’s upon them to drop their arrogance, the empty pride and inflated egos and think rationally.

Eritrea will be free as it wished for decades and no one can stop that destiny. I am just urging them to be part of the expected change and hasten the realization of freedom and dignity for the Eritrean citizen.