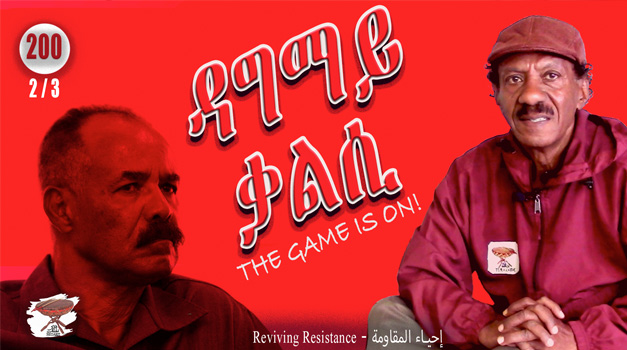 In the previous Negarit, we talked about the three stages of the revolution or movement

Stage 1: is to express, verbally, in writing, and in action our opposition to the Isaias Afwerki administration.  Call that PFDJ, ህግደፍ, enemy, Adi Halo but you are talking about a system and people for developing and implementing the cruel and reckless policies that are hurting the Eritrean people.

Stage 2: is about doing what is explained in stage 1, but not on an individual basic or ad-hoc task-based way but in an organized way, using democratic norms and organizational discipline. I will have more to say about this because it’s today’s episode.

Stage 3: is to design policies and action plans for the demise of the regime and its replacement.

Buckle up for Stage 2*

If you are legally and morally opposed to the Eritrean regime, you are duty-bound to do something about it.  And if you don’t just want to say “ሕልናይ ኣዕሪፈ” (can’t blame my  conscience) you will want to find people who feel the way you do and organize.  This is the equivalent of reducing poverty vs providing one meal for a homeless person.

In my teen years I rubbed shoulders with the Bahai evangelists and one of the wisdoms I heard is that poverty cannot be eliminated by individual gestures of alms given by many people to the poor people. Instead, Bahai encourages to create funds that will create job opportunities to the poor or establish institution that will care for them.

There’s an Arabic saying, “If you gave me a fish, you fed me for a day, but if you taught me how to fish, it’s as if you fed me forever.” And there lies the secrete of working in unison as opposed to helping individuals in an unsustainable manner. Thus, organized effort is impactful. Get organized.

Let’s see who you are you. I don’t know all my audience in person, but you are most likely an immigrant, a refugee, an exile living in country as an asylee, or a refugee. You are most likely a student, a professional, or a worker. You could have family you take care of, or you have relatives who depend on your earnings… not just where you live, but also extended family in Eritrea who live hand-to-mouth. Your support could be their only income because there is no economy in Eritrea worth mentioning.

Well then, how you do it?

Let me introduce it thusly: you know what was the most surprising thing to find in Eritrean field during the struggle era, even when the combatants had to relocate and redeploy frequently? A “library.”  There was always a combatant in love with books and that would be his treat to you. And many carried a few books in their backpack, together with the little things they had. Some gave you cigarettes or chewing tobacco, but some gave you books.

It was common to see those who didn’t have a chance to go to school, follow the educated so they can learn something. And the better educated loved passing their knowledge to the less fortunate.

Let me tell you another thing. You know there was a long history of “Research & Documentation” in the Eritrean field. In the Second Congress of the ELF, Herui Tella Bairu was appointed to head the Research and Documentation unit together with equally educated persons like the late Azien Yassin.  Research was important.

Many of you complain because there are not enough books about Eritrea. It’s not only the lack of book, but the PFDJ (the only allowed and ruling party in Eritrea), that is limiting access to books—scholarship and literature are the victims of a regime that criminalized freedom of expression and association. The government fights free-thinking and Eritreans have developed a national psyche about filling in the gaps.  And the censorship sadly worked to our severe disadvantage because in military terms “research and documentation” is considered “intel and recon”: the ingredients and the glue of a police state.

To do this, you need a Conference. Not a conference of a few talking and everyone else listening to obediently follow without questioning! But all of us asking all of us answering with a tone of respect and reconciliation.

We don’t need funding from EU or US to do that.  We can do it on our own.  Us. Those of us blessed enough to live in lands that allow us freedom of assembly, freedom of speech, freedom of movement.  With all of those eased for us, something that many of our fellow citizens do not enjoy. We have an obligation to do it for them.

When I say that, some of you might say “but that’s method been tried!”

You are telling me? I know. But just because you tried and failed at something, it doesn’t mean you stop trying.  This is Stage 2. A stage about the belief that many are better than one; many get there faster than one; many can carry a heavy burden to longer distances than one.  We are human beings.  And human beings are social animals. In fact, if we were not social animals, if we were lone wolves, we wouldn’t feel the pain our people endure every day.  And to help them we must first get together.

THE GAME IS ON

Four years ago, the PFDJ introduced yet another slogan to attack their nemeses the Weyane, the Tigrayan TPLF. In no time, the slogan changed target and was shouted to silence any opposition to the PFDJ who used that silence on the opposition more that=n they did on the TPLF, for who the slogan was created. But what many don’t know is that the Eritrean ruling party is the one that opened the doors so wide and ushered the TPLF into Eritrea. It invited them to engage in the mess it created in the Eritrean struggle. The same Isaias and his cohorts are responsible for involving the TPLF in Eritrean politics. I say, Eritreans should not be sacrificed in the never-ending wars and rivalry between the TPLF and PFDJ. It’s your war and keep Eritreans put of it.

So, it is wise to realize that the Eritrean Resistance against the PFDJ tyranny is determined to continue its struggle until freedom and justice is established in Eritrea. Its game might be over, but the peace and justice loving Eritreans are telling the PFDJ, “THE GAME IS ON!”