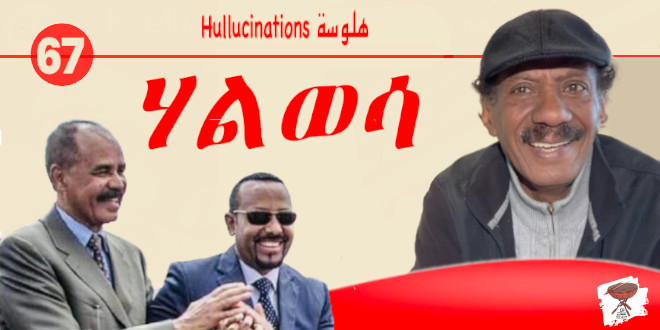 Probably many do not know that Tsehaitu Berakhi became famous in Keren before she hit, the record disc fame.

I know Tsehaitu, how could I forget the woman who harassed me as a child and forced me to walk on a different street where she cannot see me, to avoid her pestering when I walked to school. Ya Eneyya! Do you know what that means? It’s flirting! And a for a young boy, very embarrassing. But whenever I hear something saying Ya Enneya, I immediately remember Tsehaitu Berakhi.

Tsehaitu who had her Enda Swa on the main, and only asphalted road, in Keren. Then suddenly she disappeared, but soon she became a famous singer and her records were everywhere. Almost all bars, teashops, buses played her songs.

I first heard her on Disc when I was vacationing in Massawa where I was on vacation with relatives in Edaga. At about the same time also Alamin Abdulatif’s song, Abay Aba Shawl was becoming popular. Tsehaitu’s song about the Aba Shawl neighborhood in Asmara was blasting all around Batsie’–Aba Sahwl Zeban CherHi. I wondered, is this the same Tsehaitu that I know? Good she didn’t she left because growing up, she was really embarrassing me. She moved away when my voice became huskier and after that, I think I would have not been that bashful. It would have been my turn to pester her.

Let’s talk about the origin of the name Aba Shawl.

Last week someone sent me a clip from EriTV. It was a reportage about the origin of the name Aba Shawl. I had raised that topic in one of my previous episodes of Negarit and asked my audience for feedback on the name. A friend sent me the report clip and said “this might help shed some light on the question you raised.”

The EriTv reporter roamed around Aba Shawl asking its residents what they thought was the origin of the name Aba Shawl. Here is a sample of the explanation of the current residents of Abba Shawl…

After watching the c;lip, you will agree with me that the history of Aba Shawl is dictated and documented based on the lyrics of the song by Alamin Abdulatif, meEbeye zekhtam nerki….

That is how folktales are made, Tsewitseway, and if not corrected in time, it becomes an established history. I do not want to go into the revision by EriTv about certain “facts” but never mind for now because that will take us to ArbaAte Asemera and I do not want to go there…

So, the knowledge of most people in our region is made in this way…. Someone thinks Aba Shawl had a university! When ignorance rules in a country, that is the least of the damage that can happen. Children are not encouraged (let alone trained) to be curious, to learn, to start understanding the basis of research, the basis of critical thinking. Eritreans are denied that vehicle of learning and we remain a nation whose major reference is the oral history of mythology and folktales. Alamin Abdulatif unknowingly wrote the history of Aba Shawl in the lyrics of his famouse song. And that song has shaped the perceptions of many Eritreans just like similar folktales are shaping their perception of their history.

So, whenever people tell stories they cannot prove, based on folktales, remember Aba Shawl. Also, imagine someone in the future teaching the history of Aba Shawl in a school, based on what you just heard. It’s all perceptions without proof.

Abiy Ahmed has empowered the remnants of the feudal supremacists and violent elements for political expediency. And it has been a while since they have been provoking Eritreans. But in the last few weeks, the provocations have exceeded the tolerable limit. For today, I chose two clips to illustrate that such instigations are what incite conflicts and violence. When people, particularly those who hide behind the veil of a reporter, consider instigation as a hobby. Eritreans reacted furiously for my taste, but I fully understand the justifiable reaction. As a result, some are mocking the reaction of Eritreans, while others think it’s a bit exaggerated. Still others are so appalled by the audacity of the aggressive elements who insult people and then wonder when the insulted react!

Since disclaimers are important for an overly sensitive people, mainly the Habesha people, let me make a disclaimer. Honestly, I do not know many humble persons among the Janhoi crowd, they are just too sentimentally attached to the Solomonic dynasty, its mannerism, and believe its narration of history—Etipya TabetsH idewa lesemai, and similar none-sense. They believe they are the elect of God, all of them, and also believe they are mandated by a divine power to lord over others. I have no disclaimer to make to them.

As for the Derg, I have to admit the “Land for the Tiller” policy it implemented is probably the most important policy in the history of Ethiopia, besides demolishing the Solomonic dynasty. I also know two decent Derg members, one of whom I befriended while I lived in Kuwait, Ambassador Tesfaye, the former Derg UN envoy to the UN. I also know Major Dawit who is a decent person except sometimes he makes hasty conclusions despite his exceptional intelligence and rich political experience. In an article he wrote last year he publicly “advised” me to jump into Dr. Abiy’s Medemer Karrosa, Abiy’s rusty cart. Now I believe he has revised his position.

These, the sample of Ethiopians I do not care about, and those I care about, including my decent Ethiopian friends and the many fair, human ones.

But what is wrong with the aggressive type that Abiy is catering to and has become his constituency?  I know this group doesn’t have any respect for basic human laws, let alone international law. That is why they shamelessly threaten to invade a sovereign Eritrea. For your information, Eritrea is already occupied by Isaias and his party and I wish they leave us alone to get rid of that occupation before we deal with their planned invasion.

It is sad. Eritreans are so careful—please don’t judge them based on the behavior of the violent Isaias and his group, or on the social damage that despicable regime has inflicted on Eritreans. We have bled enough, lost enough and we do not want to see bloodshed anymore. Please cool down and help us maintain some sanity. But if you think Eritreans are less capable of fighting, you are wrong. Do you think the Eritrean devil is less than the Ethiopian, or Somali, or even Yemeni or Sudanese devil? Oh boy. Sorry, I have to be blunt, and I will borrow a little of your arrogance for a few minutes to state the following as a reminder:

Remember, Eritreans taught everybody and their uncles how to fight for their rights. How to fight for justice., How to resist injustice. And that is in our blood we just resist summoning it because we want to stop violence before it starts– for the good of everybody. But those who think Isaias emasculated Eritrean, it’s by choice. A sober, patient silence, and inaction because we do not wish to ignite the matchstick. Please don’t provoke us. Don’t. Please, I beg you, don’t.

Samples of the provocation by two irresponsible Ethiopians featured on the Video.

1. We have to manufacture an Eritrea than cannot be a risk to Ethiopia

2. Create an Eritrea without military or diplomatic tools, powerless and give it to them!

3. We are indebted to Isaias who prevented Eritreans from being educated, unproductive, and a real country for 30 years, and we should not forget that

4. We will conduct their relations with the outside world through the Ethiopian ministry of foreign affairs. Creating such a weak state is possible and it is needed.

5. We need a shore where our naval force and Tor Serawit can control fully

6. Eritrea can be allowed to have only a sort of local administrative government

8. Assab is for Amhara, a Wollo territory

9. You should open Assab to the great Ethiopia of 110 million people

10. Abiy Ahmed the con artist, gets the Noble prize… but where is Assab?

11. If the Amhara faces you they will defeat you, because Amhara were never defeated

12. Derg was an Oromo force, Amhara defeated it, but ghe victory was stolen and delivered to the Tigre people.

13. Why can’t Eritrea be united with Ethiopia, it’s such a tiny country, the size of a forehead tattoo

14. It’s the Eritrean jealousy, Shaabia, how can a small country like Eritrea be a country?

15. Why did Abiy Ahmed bring us to deserve the Noble prize?

16. Why do you Eritreans come to Ethiopia to vacation and then say Red Sea is theirs? But based on history, everything belongs to the Amhara