Its Time for a Unity Government in Exile

Posted on February 3, 2021 by Salyounis in Eritrea Digest 380 Comments 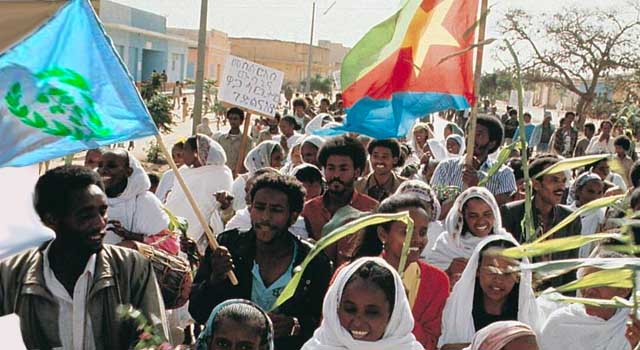 Nineteen years ago today, on February 2nd 2002, Eritrean President Isaias Afwerki corrupted the Eritrean Parliament into taking measures that were effectively institutional suicide.  How and why it took this shameful and fatal step is chronicled here.  Unquestionably, the removal of an institution that was the last check on the executive accelerated Eritrea’s slide into a One Man Monocracy, which has led Eritrea from one self-inflected wound to another to arrive where it is now: a country without a constitution, without any liberties, where its citizens live in fear of their government and, unlike some people who live in totalitarian states but have something to show for it by way of a higher living standard, our people are poorer for it: materially, spiritually, and any other “ly” that measures human development.

This author had argued before that the solution is a “democratic coup”: meaning, for the ruling party to reset itself and set the country on a path to democracy (article published at awate can be found here. ) This, obviously, would mean that those who are in a position to do so–the leaders of the Eritrean government’s civilian and military institutions–remove Isaias Afwerki from power and resume the path that was started in 1997 when the country’s constitution was ratified.  This idea was further fleshed out in more detail by former Minister of Finance Berhane Abrehe in his book: Hagherey Ertra, whose English summary and critique is available here.  This author and Berhane Abrehe made the assumption that it was still possible for Eritreans inside Eritrea to be the engineers of this change, a prospect that seems distant now in a land ravaged by Isaias Afwerki’s sadism and a pandemic.

It is time that the Eritrean Diaspora assumed more of the responsibility and in this article, I will try to flesh out an idea that I consider viable and, more importantly, grants our future leaders instant legitimacy.

Before I propose my idea, let’s agree on the facts, first:

I.  Eritrea has only one legal party (it calls itself a Front) and this party has not had an organizational congress since 1994 (February 1994, 27 years ago.)

II. Of the 75 members of the Party’s Central Committee, the individuals whose names appear in bold are either dead, in detention, in exile or “frozen” (quietly demoted):

III. There are thousands of EPLF supporters who do not support PFDJ and do not have a political home. These are the “Shaebia Now, Shaebia Forever, But Death To PFDJ” people.

IV. Over the last 20 years, the Eritrean opposition has failed in organizing itself into a potent political force with vibrant institutions of law, media, and communication. During the same period, the Eritrean Diaspora has also failed to create a self-sustaining civil society despite the fact that it has been quite successful at creating ad-hoc groups focused on a single issue (Isaias To ICC, HRC, OneDaySeyoum, and 101 YouTube Channels and Facebook groups and satellite stations.)  All the splinters have been caused, in my opinion, due to lack of legitimacy: nobody accepts the authority of a leader.

Now then, my proposal.

Shortly following the convening of the EPLF Organizational Congress, Eritrea’s other half must hold its own Organizational Congress.   By “other half” I refer to Eritreans who do not think the EPLF represents their values.   The two organizations (not ten, but two) then create a Unity Government In Exile, representing themselves as an alternative to the Band of Misfits and Enslavers in Eritrea.  This will not enable them to do all the things a government does, but it will empower and legitimize them to do some of the things governments do including meeting with foreign dignitaries and fashioning alternative policies to the suicidal ones pursued by the PFDJ.

If you are thinking it is too bold to announce oneself a government in exile: you shouldn’t even try. The only reason the one in Eritrea calls itself a government is not because it is governing by the consent of the people (whereas you will) but because it has guns.  If that is your argument,  that only people with guns should hold power, then you should forget about the Organizational Congress and organize an army.  Geisha Alla ember eta ghedli, as wedi tkabo sang. But doing nothing is not an option.

Besides, what is the alternative?  For people like General Filipos to organize a coup?  For a people who are under house arrest and banned from organizing in groups of 10 to organize a popular uprising? For Isaias Afwerki to die? News alert: his mama is still alive.