Posted on September 22, 2013 by Semere T Habtemariam in Perspective 253 Comments

When I first met ato Kidane Alemayehu, I thought we were auditioning for a rendition of the movie, Odd Couple. He was an Ethiopian and an Amara with a propensity of repeating the all-too-familiar “sameness mantra” I’ve heard all my life; but one that was unequivocally rejected by my own father and over twenty immediate family members who have proudly paid the ultimate price for Eritrea.

I too was a product of my upbringing who did not feign any qualms of expressing hatred towards the Amara. Like my generation, I hated everything Amara, and took pride in not being able to speak their language. I still don’t speak Amharic, but as I got older and hopefully wiser, I am neither proud nor ashamed of it— just neutral.

The first thing that struck me about ato Kidane Alemayehu was that he is a gentleman through and through. His nobility of character, decency, and integrity was evident; but, most of all, he was very open and honest on all issues. I liked him immediately; and knew instinctively I could work with him. As the founder of the Horn of Africa Peace and Development Center, he was looking for a few good men and women from Djibouti, Eritrea, Ethiopia, and Somalia.

On our first encounter, and with a purpose of laying everything on the table, I told him blatantly how I grew up singing, “ab ruba ruba Tseg’I gobo amHaray adgi intezrekbo breney gere k’imbbo.” The song encapsulates our burning desire to avenge the wrongs committed against our people by the Amara. In all honesty, I didn’t even know the Amara look like us till I came to Khartoum, Sudan; I thought they all looked like Menghistu Hailemariam.

The Horn of Africa Peace and Development Center is the brain-child of ato Kidane Alemayehu. The center is established to foster peace and development in the region. For the last seven years, I have worked with ato Kidane Alemayehu and many other wonderful people from the region and came to know him well. His passion for peace and justice for the region is real; he is a tireless advocate of regional integration.

Ato Kidane Alemayehu and I have become good friends and, to my pleasant surprise, I feel reconnected to a lost uncle. Aya Kidane was one of the first to come and express his condolences when I lost my older brother, Dawit (May his soul rest in peace.) Whenever I call him, he would immediately say in his endearing Tigrinya accent, “Hi, Semere, Kemey aleka?” It is a friendship based on mutual respect—the same noble idea aya Kidane hopes to be the basis of a brighter future of the Horn of Africa.

The following petition is part of his larger plan to right what was wrong; heal what was wounded, and unite what was broken apart. It is a big project, but he has a heart that is even bigger.

Please sign the petition below and show solidarity for a just cause initiated by my friend and lost uncle, ato Kidane Alemayehu.

Semere T Habtemariam is the current chairman of the Horn of Africa Peace and Development Center, and the author of “Hearts Like Birds” and the forthcoming book on the History and Faith of the Orthodox Tewahdo Church of Eritrea and Ethiopia. He can be reached: weriz@yahoo.com

Will Italy and the Vatican Emulate
Britain and The Netherlands?*
By Kidane Alemayehu

Apologies and Compensations by Britain and The Netherlands

Two European nations, Britain and The Netherlands, have finally come to terms with the demand for justice by apologizing to and compensating the people of Kenya and Indonesia, respectively, for the crimes committed by the former colonial powers over half a century ago.

The Vatican is still being awaited to express its apology to the Ethiopian people for its complicity with the Fascists. The Italian government needs to pay adequate reparations to the Ethiopian people for the huge war crimes perpetrated by the Fascists in Ethiopia where one million people were massacred and huge quantities of properties were also destroyed. Looted Ethiopian properties still remain in the hands of the Vatican, and the Italian government.

Britain’s Apology and Compensation to Kenya 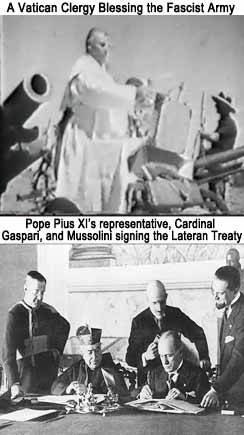 In addition to the formal and public apology, Britain agreed to an out-of-court settlement for the payment of $30.5 million at the rate of $4,100.00 compensation per claimant to a total of 5,200 victims. Thus, although the compensation is obviously low compared with the number of victims, nevertheless, the fact that Britain owned up to its past crimes against the Kenyan people deserves appreciation and, hopefully, leads the way for a more just settlement.

The Netherlands Government’s Apology and Compensation to Indonesia

In a news item entitled: “Netherlands apologises for Indonesian colonial killings” dated September 12, 2013, AFP (Agence France-Presse) reported the historic action by the Government of the Netherlands that offered its formal and open apology at Jakarta to the Indonesian people for the “mass killings” undertaken by the Dutch military during 1945-49. It is also reported that the Dutch government has offered Euros 20,000 to each widow of those massacred (40,000) during the colonial days. For more details, the following link may be checked: http://www.scmp.com/news/world/article/1308843/netherlands-apologises-indonesian-colonial-killings

What Do the Actions by the British and Dutch Governments Exemplify?

The compensations offered and the formal apologies expressed by the two governments to the Kenyan and Indonesian peoples, respectively, reflect important principles of humanity and justice. Among other things, it clearly indicates the British, and Dutch governments’ admirable capacity to own up for their past war crimes. The actions clearly emphasize the fact that such crimes have no stay of execution. Therefore, even though the British and Dutch massacres and atrocities in Kenya, and Indonesia, respectively, took place over sixty years ago, the Governments finally faced their obligations squarely and apologized to the Kenyan and Indonesian people.

The British and Dutch apologies and compensations also reflect their respect for the Governments and people of Kenya and Indonesia who had suffered a massacre at the hands of an invading, colonial army. By their honorable action, the British and Dutch governments have set an excellent example for the international community, especially the Vatican, and Italy, in the war crimes committed in Ethiopia.

Therefore, the governments and peoples of Britain and the Netherlands as well as those of Kenya and Indonesia deserve the fullest accolade for facilitating a closure for the atrocities committed during the colonial days.

The following war crimes and devastation was committed in Ethiopia by Fascist Italy with the complicit support by the Vatican during 1935-41:

(a)   One million Ethiopians were massacred of whom 30,000 were killed within only three days in Addis Ababa; and at least 15,000 people were killed as a result of the poison gas sprayed by numerous Fascist airplanes in many parts of Ethiopia;

Fascist Atrocity in Ethiopia : Justice Owed to the Ethiopian People

The Global Alliance for Justice – The Ethiopian Cause (www.globalallianceforethiopia.org) is in the process of conducting an international campaign to achieve the following objectives:

1.      A Vatican apology to the Ethiopian people for its complicity with the Fascists;

2.      Adequate compensation by the Italian Government to the Ethiopian people for the huge loss in lives and property they sustained as a result of the Fascist war crimes;

3.      Restitution of Ethiopian properties by Italy, and the Vatican which, for example, has over 500 Ethiopian documents in its custody;

4.      The dismantlement of the monument established by Italy for the Fascist “Butcher of Ethiopia”, Rodolfo Graziani, at Affile, a town southeast of Rome; and

5.      The inclusion of the Fascist war crimes in Ethiopia in the records of the United Nations.

The international community, including the United Nations, the European Union, the African Union, the Vatican, and the Italian government should take a leaf from the excellent example set by Britain and the Netherlands which have demonstrated their respect for human rights and justice by apologizing to and compensating the Kenyan and Indonesian victims of their colonial massacres. It is time that the Ethiopian people who have been awaiting the justice that has been due to them for over 75 years are duly compensated in terms of a formal apology, reparations, restitution of properties, and recognition as stated above so that, finally, a closure will be achieved.

*Although the content of this article is the responsibility of the author, the helpful suggestions by Dr. Girma Abebe, Dr. Mikael Wossen, and Mr. Deneke Hailemariam are greatly appreciated.Kidane Alemayehu is a retired United Nations expert.
Shares