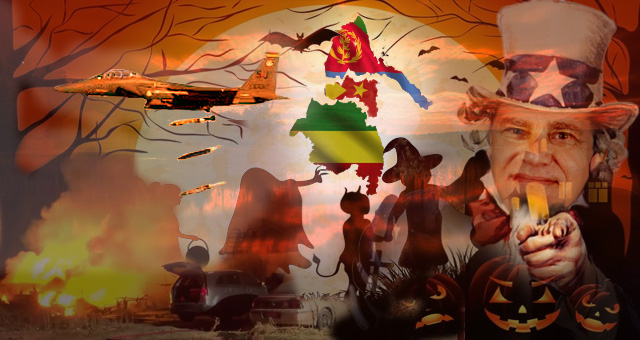 The “je t’aime, moi non plus” (I love you, me neither) tic-tac exchange between the Eritrean Tweet and the American Facebook (in Eritrea) has of course nothing to do with Jane Birkin’s & Serge Gainsbourg’s Vatican-condemned feverishly intimate love song with the same title, but reminds of a tigrigna adage that says ኩሽማን ደርሆ ኣብ ኣፍ ቆፎ, translated into “chicken courtship over the granary”. The Eritrean granary is adequately full for those governing Eritrea and precariously empty for its opposition. Now, leaving aside the courtship part and the state of the granaries, there is a lot of virtual pecking going on between them in the last several months.

Some explanation is due here to understand the adage. The Eritrean traditional highland hill-adossed house, hidmo, is home to all family members including new-born young animals, the chicks and the chicken. The house has a single room with a kitchen separated by a wall of granaries. A high place or hangers are built inside the house for the chicken to perch and lay the extremely precious eggs, safe from the martens. The house is almost like a chicken playground where they jump everywhere and over the granaries fighting, performing, hen’s squawk & clucks and cock’s crows. They are the noisiest of all members of the house. They scratch while dropping on the swept mud floor driving Madame the owner, crazy. She never stops saying n’i-ket (ንዒ-ከት = go-away, a specific call for a chicken) to chase them.

Apparently, there is no Doyenne of diplomats in Asmara to stop the clucks and crows through diplomatic n’i-ket. After all it is said that the perched diplomat has not been officially received and photo accredited. In addition, the Doyenne of diplomats is probably a non-resident as most diplomats to Eritrea are, putting in question the strength of Diplomatic Corps in Eritrea. Therefore, only the concerned themselves can bring an end to the open-mouth undiplomatic henpeckery.

The henpeckery was most likely not a voluntary bad habit from the foreign Pecker’s side. A diplomat doesn’t open his mouth in public unless he is prevented from speaking or the listener shuts his ears. Once provoked, however, right or wrong, the American eagle that landed in Eritrea turned into an Egyptian vulture (Neophron percnopterus), picks available pebbles and hits the eardrum of the deliberately deaf, like it does to crack an egg. The issue of the deaf-eared endogenous pecker appears to be the proverbial Guerilla or Rebel state-boredom. Guerillas like Gorillas are wild and extremely reserved. They don’t rebel without a reason to begin with. They do because something was taken from them. Until that missing thing is given back by the taker or before snatching it themselves, they stay in their position, and they rarely resort to classical diplomacy. Reclusion is their haven.

In Eritrea, we have our Eritrean Rebels who got what they rightly fought-for for 30 years. But at the end, they did not get fully what they expected from the most powerful nation on earth, America! Because of this, their fight continues in order to fulfill this expectation. On the way they remained an overhardened Guerilla with only a state to control and in diplomatic limbo because of the non-engaging Guerilla diplomacy. In the weird relationship between Eritrea and America, from ordinary observer point of view, what is missing appears to be a mystery to America and so obvious to Eritrea (why does the almighty hate Eritrea this much!). The confusion is comparable to the Ethio-Eritrean no-war no-peace situation. Was it about Badme? No and yes, depends on who and when you ask. And at the beginning of the Eritreo-American row, there was the imprisonment of US-embassy staff (Eritreans) by Eritrea. Was it the cause of the persistent discord? No and yes, depends on who you listen to, if at all the subject is raised. Interesting to note that this subject appears to be the only one kept in the valise diplomatic, while other contents appear to have been tossed in public these days by both proponents.

In this diplomatic quagmire, it appears Eritrea and the US have fundamentals one expects the other to act on. America says, it is for individual freedom and justice and for democracy. Eritrea says, it is about regional and continental freedom and continental justice. Everything else comes after. Our Guerillas freed Eritrea, why not free the continent from the American multifaceted umbra with their penumbra! The Eritrean side was openly heard pointing into that direction following the visit of American envoy to the region. Eritrea doesn’t want to remain a penumbra around the shade of a neighbor’s American umbra. Unfortunately, Eritrea’s expectation is much more than what America would even consider entertaining. Eritrea dares to bring demands on the American domaine-réservé in the conduct of its African affaires. Eritrea also defies the American expectation that everyone understands, “America demands – country obeys”. America’s is not a country; it is more than that. Its power and world standing oblige! The contrast between the two can be exemplified by a mouse asking to a Mastodon a large share of the forest above ground.

But for God’s sake, Eritrea is not a mouse! It is a Camel. You can argue it is a miniature Camel. But what matters is, it is as resistant and as unforgetting as the actual Camel. And Eritrea is unforgetting and unforgiving on the American choices in Africa in general and our region.

Astoundingly enough, and as expressed on various occasions by President Isaias Afewerki and different American politicians & diplomats (his excellency Dr Tibor Nagy’s recently), there is one point that both Eritrea and US are in perfect concord, and that is ” the stability and integrity of Ethiopia”. It appears Eritrea assured its independence to tie tight the Ethiopian Burlap remaining the empty top fluff itself.

The concern on maintaining unity of Ethiopia became both countries primary interest in the region. Both started working for this since 1991 through TPLF, the then new Patron of Ethiopia. The divergence between Eritrea and US escalated following the disagreement, fault and conflict between Eritrea’s EPLF and Tigray’s TPLF. We can also ask on whether the war started due to the divergent view of the US and Eritrea in maintaining regional peace following the apparent pacification of Ethiopia. Let’s leave this to history. Anyway, the squabbles exposed an already existing or a newly developed strategy of each. America chose stability of Ethiopia through TPLF. Eritrea although it started doing the same, shifted to stability without-TPLF. The TPLF side is not a bystander or stranger to the sudden change as it was advocating for the elimination of EPLF, its Eritrean nemesis, not to say its father. Patricide was TPLF’s ordre du jour while insisting it was self-conceived.

Back to the mask-less American facebooker in Eritrea. He is not only over the granary facing the Eritrean tweeterer, but also travels like a Camel throughout Eritrea. We have seen the Facebook’s book filled with photos of Maryam D’arit, the historic Massawa Mosque, the Shiro, the teff field, the Elephants, the sea and e-t-c. Who knows tomorrow he might post from the historical Nakfa trenches! This American Facebook travels à l’Addison Southard. Southard, the first American in the early 1900s to roam Eritrea with a notebook like no one did except the Italians, studying and registering every production and imports of the then Italian colony, a colony he described as endowed with a top-quality port (Massawa) that existed between Port-Sudan and Mombasa. Let’s hope the Facebook armed modern traveller will also end with a book like this American early diplomat who tirelessly went to all places in Eritrea as well as Abyssinia of the 1915 to 1930s. Southard expressed satisfaction and hope on the potential of Eritrean market for American goods and American imports from Eritrea while finally concluding the highest market for Eritrea was Abyssinia and especially northern half of Abyssinia. Therefore, it is not at all a coincidence that the Facebook that replaced Addison’s notebook is facing south while stationed in Eritrea.

Our Guerilla tweeterer also visits Eritrea, but virtually and sometimes sends photos. His recent photo of an Ostrich with a bunch of cutie chicks was a chef-d’œuvre in photography. He doesn’t need to rediscover every place in Eritrea to outdo the facebooker. He was there for several years in the bush. We can imagine him chuckling at the facebooker’s discoveries. Now 30 years sitting in the capital, he has been sending the young every year to the bush to get the practical instruction he acquired during the struggle. The young weren’t against the idea, but don’t like it because of the expectation to stay in the bush for the same decades as our Guerillas did.

So where is the COVID-resistant mask-less granary henpeckery leading us to? Nobody can say. No one knows whether it ends in opening the ears and official gates of the palace for photo-opp & accreditation, Godana Harnet face to face over macchiato ‘amical’ confrontation or something completely out of our imagination. Nobody knows. Hopefully, it will be in as peaceful as possible ending & alleviating the suffering of the ordinary Eritreans.