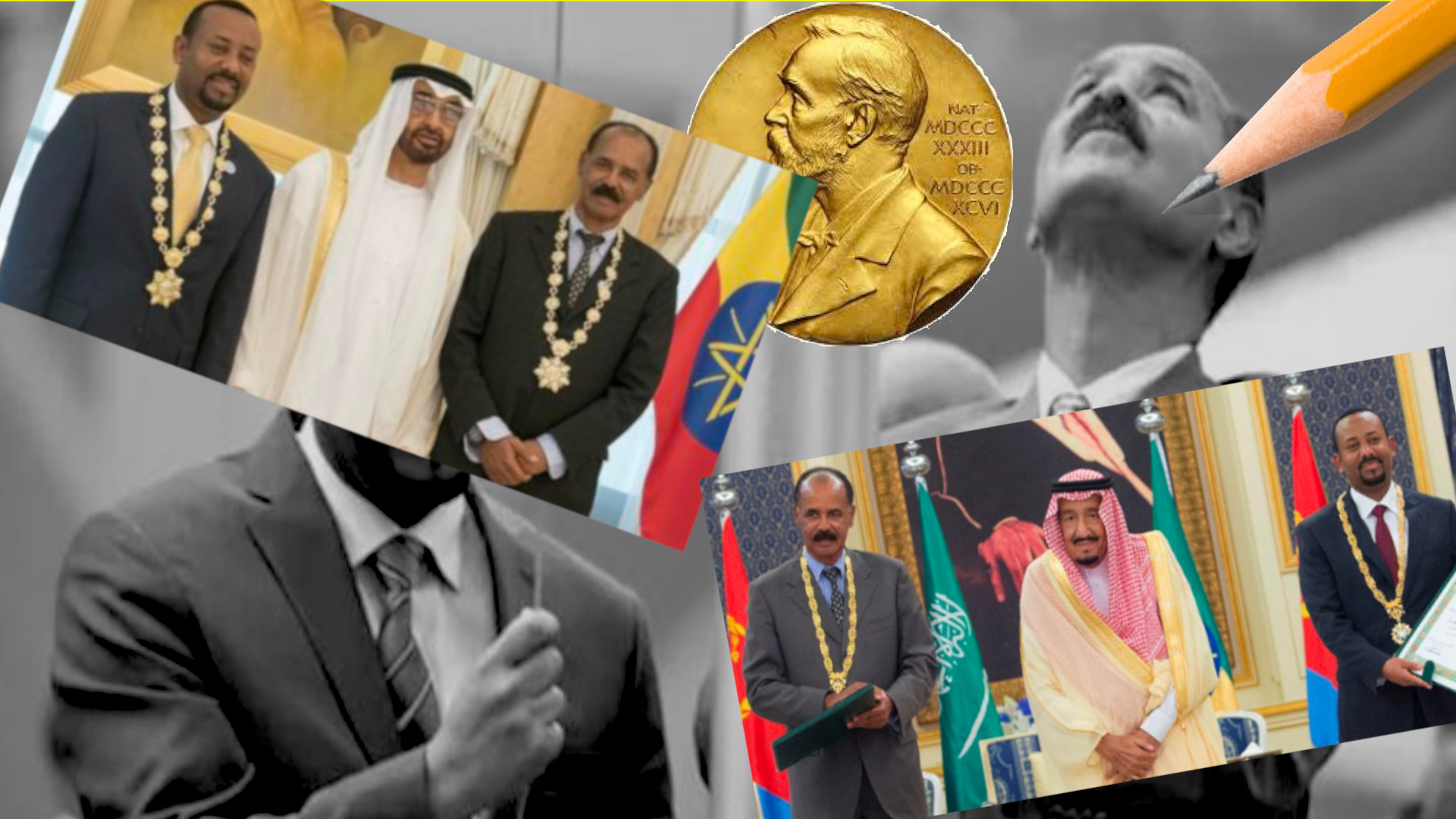 Last week Ethiopia went through eventful days. Among other things, on October 9, prime minister Abiy Ahmed inaugurated the 20 hectares Unity Park in the national palace grounds in Addis Ababa in the presence of invited officials and heads of state of the region. The unelected president of Eritrea didn’t attend because he has bestowed all the titles he holds to the Ethiopian prime minister. And as Abiy Ahmed was inaugurating the park, news broke that he is the recipient of the 2019 Noble Peace Prize.

The Noble prize news overshadowed the other news and invoked a mixed reaction; it excited many and disappointed many more, mainly Eritreans, though the news was not any worse than in 2009.

On January 2009, Obama became the president of the USA ; nine months later he was awarded the Nobel prize. It took Obama 19 months, ten months longer than Abiy, to reach what the Italians call “Traguardo”.

Humanity should be grateful to the French newspaper that unknowingly triggered the feeling of guilt in Alfred Noble. If not for the newspaper, probably the Noble Prize wouldn’t have been conceived.

In 1888, according to Wikipedia, “Nobel was astonished to read his own obituary, titled The merchant of death is dead, in a French newspaper”, but it was a mistake. It was his brother who had died. Nevertheless, the obituary “disconcerted Nobel and made him apprehensive about how he would be remembered.” Thus, the idea of a Noble Prize was born and Alfred Noble decided to bequeath 94% of his assets to mankind through prizes in his name. Since then, the Noble Foundation is managed by a board consisting of Swedish and Norwegian citizens–the two countries were ruled by one sovereign before being separated.

The Noble Foundation is a capitalist entity with a goal of investing and growing Alfred’s largesse. Therefore, the board invests the assets that Alfred left behind in bonds, hedge funds, and real estate, among other things. Then it earmarks prize money (40%), and another chunk of it is allocated to “pay institutions and persons engaged in giving the prize [22%].” It’s their money and no one should complain.

It is worth remembering that no peace prizes were given out during the years of WW2—of course, it doesn’t make sense to recognize peace when the world was awash with blood, while lives and properties were being destroyed. And of course, the situation in Eritrea cannot be equated to that of the WW2, but to some extent, a few Eritreans are in a worse situation than what many people underwent in WW2. Therefore, any peace award doesn’t make sense in a context involving Eritrea.

But every now and then, the Noble Committee fancies running a comedy skit, like it did in 1994 when it awarded a peace prize to Yasser Arafat, Yitzak Rabin, and Shimon Perez. It was convinced the three men brought peace to the Middle East by signing an illusionary peace accord in Oslo—similar to the one Isaias and Abiy signed four times: in Asmara, Addis Ababa, Abu Dhabi, and Jeddah.

And that illustrates that two countries beat the Noble committee to the recognition of the “Peace agreement”. In July 2018, Abu Dhabi awarded the Isaias-Aby duo the “Order of Zayed.” However the Saudis wouldn’t allow to be outdone by an upstart country like the UAE. In just two months (on September 2018) they produced and directed another comedy skit during which they awarded the duo, “The Order of King Abdulaziz”. Mind you, the Arab awards are not simple  gold coins like that of Noble, but pure, heavy golden collar. However, unfortunately, only the news buffs learned about that because the Arabs do not announce prizes, or anything of that nature. But it’s likely they didn’t allow themselves to be outdone by the Scandinavians whose prize money is a meagre US$1.2 million, and a coin.

The Feeling of Eritreans

Truth be said, Eritreans are divided on the Noble prize award. While a few think the award will likely contribute to changing the image of the region, which so far is considered a perfect example of warlordism, others have a different view. The latter’s view is summarized by Assenai Mussie who tweeted:

“…even when he is invited, through the back door, into our house by a robber who gives him a copy of the key & assures him he is at home. Both the robber and the accomplice know better…but why should they be bothered (and that’s the question we must answer for THEM).”

We believe Abiy deserves the prize for many other thing he accomplished in his short tenure. But the exaggerated and wrong perception of “bringing peace with Eritrea,” is definitely not one of them.  Does Abiy’s “peace with Eritrea,” that emboldens a dictator and comes at the expense of the people deserve a Noble prize? No. That is why some Eritreans are contemplating running a hoax obituary for PM Abiy hoping it will disconcert him in a similar way the French newspaper obituary did to Alfred Noble. Maybe then he will remember Eritreans are oppressed.

Sadly, Eritrea under the current regime has never been at peace with itself let alone with its neighbors–and the many accords signed in seclusion by the Eritrean dictator mean nothing to the people who have never been consulted in war (which is real) and in peace (which they never had). Still, Abiy’s predecessors could have done what he did and saved the people of the two countries decades of agony. They didn’t. He did. And he deserves a loud accolade, or a pat on the back. But nothing more. Eritrea is still ruled by a tyrant who denies the remains of dissidents from being buried in their country. He doesn’t yearn for peace, and nothing has changed in Eritrea for over three decades. And though the event could have busied the ceremonial halls in Oslo, it means nothing. But we suppose Eritreans should just shut up because they’re not part of the choosing metrics!

Had Eritreans been consulted (just a hazy dream) to help choose a laureate, they would have come with a long list. But suffice to mention Bitweded Abraha and Mohammed Mranet who were imprisoned in 1993, and to date, no one knows their whereabouts. A curious person might ask, why the names of the two imprisoned persons?

In 1989, Aung San Suki, a prominent leader of the opposition to the military regime of Maynamar, was put under house arrest. Two years later she was awarded the 1991 Noble peace prize—she has spent (on and off) about 15 years under house. Unlike the prisoners in Eritrea (where some think peace has reigned) she was not jailed in some dungeon where nothing was heard of her. However, she survived the house arrest, entered an election, and became the counselor (equivalent to prime minister) of the country. So, how do you justify a Noble peace award for Aung San Suu Kyi, given the gross human rights violation and genocide in Maynamar? How do you justify a Noble Peace prize jointly awarded to Yasser Arafat, Isaac Shmair, and Rabin for signing a peace accord in Oslo, when the Israeli-Palestinian feud is still raging almost 25 years later? How can you claim peace has arrived in Eritrea when the rulers have not moved an inch towards respecting the human rights of the helpless Eritrean citizens? That is why people who suffer under tyranny do not hold institutions like the Noble Committee in high esteem since they consider them enablers of injustice.

Finally, the above should not lead to a conclusion that Abiy’s achievements in Ethiopia are insignificant. In fact, he has done marvels on many aspects: freedom of speech, religious freedom, releasing political prisoners, allowing exiled opposition to return home, empowering women and minorities, environmental projects, and invigorating the Ethiopian spirit—in addition to his admirable role in mediating in the Sudan. Funnily, when any of these achievements would warrant a Noble prize on its own merit, he was awarded the prize for “bringing peace with Eritrea”! That is an affront, an insult, and a disrespect to Eritreans. And that is why they wish the King of (is it Sweden or Norway?) to fire the committee and revamp the whole lousy outfit. And if we were allowed to make a suggestion, in the future, we would advise the Nobel prize to be awarded posthumously after the lifetime achievements of a laureate is properly assessed.

But the whole debacle could have been worse if the Alfred Noble kind of guilt didn’t prevent the Noble committee from awarding the prize jointly to Isaias Afwerki and Abiy Ahmed—that would have been the most hilarious comedy skit of the decade.