Posted on November 24, 2022 by Awate Team in Negarit, Videos 0 Comments 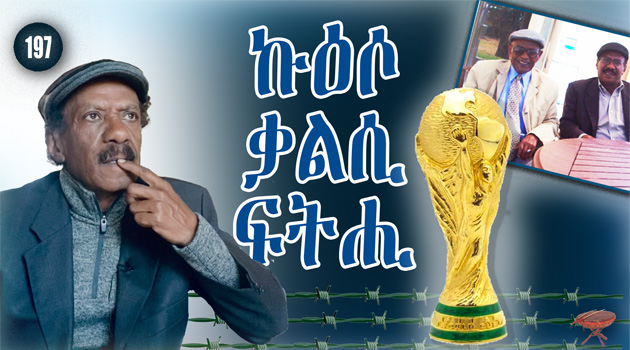 I never liked football, or soccer; when many children spent their time playing football, I sat under the chairs of old men at my fathers’ place in between school time. I listened to them and run their errands: my son Saleh, get me tobacco. Get me cigarettes. Order some tea for us. And of course school. My interest in anything sports at school, even basic physical education was gone after my sixth-grade year when Memhir Tzehaie was no more our physical trainer. By the time I started seventh grade, the no nonsense trainer, Ustaz Ibrahim Yassin failed to make me like sports. Worse, he hit me with a stick because I did something or was talking in a line as the flag was being hoisted, when it was supposed to be a serious morning ritual. I clashed with him disrespectfully and I was suspended. The director of the school, the late Mahmoud Mohammed Ali Kannoni, called my father. I was punished enough. That experience took aways what little interest in sports was left in me.

Until then, there was one exception. I boasted because I knew the star of the Anseba football team, Osman Ahmad; my acquaintance with Osman Ahmed is worth sharing.

Osman was tailor who worked out of his house where his friends spend their time while he worked at the veranda. Most of his friends ended up joining the ELF: the martyrs, Ali Hnti, Abdu Mahmouday, Bashmel, and many others from around the neighborhood. Once there was a wedding of a relative and my father bought fabric and gave it to Osman to make me a pant. Osman promised to finish it in three days; I was at his door on the second day. He said, “I told you in three days?”

I returned the next day and stood by the door. He told me to come after three days. I told him I would rather wait there until he finished it. In surprise he smilingly said, “wait here for three days?”

That is when I became useful by running errands… the usual “get us cigarettes from the shop” or “make us some tea.” I got used to the place and continued being useful even after I got my pants which I wore for the wedding. But it was not over, I continued to hang around in the place.

Then there was a match and people were flocking to the stadium. I joined the crowd and found Osman and the other players stretching their muscles. I greeted Osman and he called me to join him in kicking balls making all my peers who watched by the side turn red with jealousy. Osman shot the ball to me, and I shot it back several times under the envious eyes of the children who spend more time in the stadium that me but never got a chance to play with a celebrity. I boasted, Osman makes my clothes–though he only made one pant for me.

Osman was a member of the ELF cells and collaborated with the late patriot Adem Melekin who smuggled ammunition from the interior of Ethiopia–though folktales mention Addis Ababa only. The smuggled ammunition was delivered to the ELF by people like Osman. Then Adem Melekin was exposed, caught, and sent to jail. The police interrogators tortured him badly that his back was severely cut and bruised. At the court, the judge asked Adem Melekin to respond to the accusation. But Adem just opened his shirt and showed the judge his bruised and bleeding back. The judge was furious and addressed the attorney, “do you expect me to sentence him to death? You already killed him!” He dismissed the case and ordered the release of Adem Melekin who didn’t waste time and sneaked out to the Sudan taking his sister Amna Melekin along. Amna was the first woman among the leadership of the Eritrean Liberation Front.

Meanwhile, Osman continued his clandestine operations delivering ammunition to the ELF. One time a certain spy followed Osman to the bus station as he carried a basket to deliver in the outskirts of Keren. The spy caught him by the neck and asked what was in the basket, as another spy opened it only to discover it was full of bullets. “What’s is this, what is this?” he shouted at Osman who calmly replied: “its Peanuts!” He wouldn’t change his answer and insisted it was peanuts, all the way to the police station. After some time in jail, Osman was somehow released and sneaked out to Sudan; I heard he spent his youth away from home in Port Sudan where he is still living.

That is the connection between football, my aversion to it, my acquaintance with Osman Ahmed and the late patriot Adem Melekin whom I Addis Ababa for the first time in 1993, then I met him again in Melbourne Australia, shortly before he passed away in 2013. I hope the story provides an example for comparing between the judicial system in Eritrea during the occupational era and the PFDJ era.

Though I am not fan of football, I remembered many players, some of whom close friends and relatives… memories triggered by the World Cup matches in Qatar. I watched interesting events on the Internet, particularly the hypocrisy of the activists of the West. As the chairman of FIFA said, the West have 3000 years of human right violations which it has yet to apologize for. Indeed, we are still suffering because of the mess they left behind in many countries.

I am amazed how some activists want to overshadow all concerns of life with their single issue agenda, while the world is suffering from violence. I wish they demonstrated against wars. How about demonstrating for women’s rights, children rights, the environment, the world financial system, reforming the UN, the AU, the EU who knowingly or unknowingly consider Third world people as dummies in their selfish, hegemonic undertakings. What is this obsession with hegemonic agendas? It wouldn’t be right if I insist the world should put the Eritrean cause ahead of everything else. There are many whose main concern is the single-issue of justice.

Here is an opportunity for the language fascists, the regionalists, the racists, and the cult of the powerful, all the undignified lots who do not give any importance to the issue of Justice or freedom to learn to be human. In Eritrea the famous slogan is “Just finish off the Weyane”, the perpetual single-issue of the PFDJ and its satellites since decades, as if the nation must live and die for that feud. It disappoints me because I stated repeatedly that Ethiopians are close to each other and the possibility of them coming together is certain. They are on their way of doing just that, sooner or later. What are Eritreans doing to reconcile with each other, to make peace with each other? It seems the government thinks loyalty to it is the only way to unite the nation, and in doing so, it is damaging the nation.