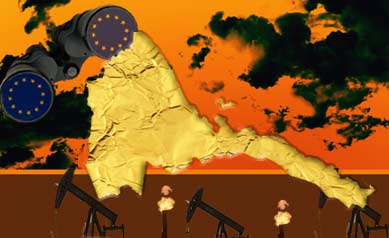 Europe’s recent rapprochement with the government of Eritrea was the outcome of an elaborate politico-diplomatic campaign spearheaded by the EU. In an earlier posting, the writer stipulated that the push by Brussels for normalizing relations was driven by Europe’s political and economic agendas on Eritrea. He further argued that the political agenda is one which seeks to ensure Eritrea’s subservience to the West. The present article proposes the corollary: control of the country’s natural resources is at the center of Europe’s economic agenda.

Mending fences with the Eritrean regime was made possible not just by EU’s own endeavor, but also by parallel efforts of an activist group of member states – a group comprising Italy, Britain, Germany as well as the Scandinavian countries of Denmark, Norway and Finland. The European Parliament recently censured the EDF Committee, European Commission  for having approved an aid package for Eritrea in complete disregard of parliament’s recommendation to the contrary.[1] In light of this amazing revelation, it is not illogical to suspect that members of this group may be the main driving force behind, if not the chief architects of, Europe’s new policy towards Eritrea.

The Role of EU’s Activist States

A high-level Italian delegation which visited Eritrea in March 2015 concluded bilateral cooperation agreement with the regime. Doubling as EU’s proxy for the mission, the delegation also provided impetus to the reconciliation process thereby enabling the EU to unveil, shortly thereafter, its Eritrea engagement plan.[2] Over the one-year period that preceded approval of the aid package, delegations of three more countries of the group had traveled to Eritrea seeking similar bilateral cooperation arrangements.

In the seven months leading up to the EU announcement, a different subset of four countries of the group dispatched their respective immigration officials on copycat “fact finding” missions to Eritrea. The orchestrated, fraudulent conclusions of these missions were identical: the majority of refugees from the country are economic migrants; people who fled the country to escape indefinite military service would not face persecution if they returned. The motive behind these claims was not so much curbing migration as it was serving ulterior political objectives, namely (i) appeasing the government by reversing policies of automatic asylum for Eritreans and returning deportees to its “custody”[2], and (ii) rehabilitating the government by whitewashing its record of brutality, so that their hoped-for “partnering” with the regime to plunder the country’s resources would be palatable to the rights community.

The existence in Eritrea of considerable mineral resources had been suggested for decades by a growing body of geologic information. This was subsequently confirmed by the extensive mineral exploration of the last twenty years. Today, the country boasts a world-class mine in operation, three others poised to go into production in less than two years and a dozen exploration projects that are yielding promising results.[3]

Of these, the mine development enterprises are managed by Canadian and Australian companies although some have lately been acquired by Chinese investors. The exploration projects represent an assortment of Asian business interests.  Conspicuously absent from Eritrea’s growing mining sector, however, have been European investments. The only exception is a small UK-based company, Andiamo Exploration Ltd., which has been exploring for gold and copper since 2009.[3]

In contrast, public information on possible oil/gas resources in the country was until recently scanty and largely speculative. Results of offshore exploration drilling projects of varying scope undertaken sporadically over the period 1921-1977 have remained inaccessible to the public. But, a subsequent compilation of limited, fragmentary information from these historical records suggested possible presence of oil and gas reserves in the country. Likewise, the findings of similar post-independence efforts undertaken by such companies as Anadarko Petroleum Corp. (USA), ENI (Italy) have yet to see the light of day.[4]

Things began to change in 2009 when President Isaias Afewerki revealed to a Middle Eastern newspaper the presence of  a “large reserve [of oil]” in the country. Similar assertions were subsequently made in media interviews and at energy conferences where regime officials declared the government’s prioritization of the petroleum sector in its economic development plan and promised incentives for foreign investments.[4][5] This series of pointers has recently culminated in government confirmation of the presence of commercial quantities of oil and gas in the country.

The Scramble for Eritrea’s Natural Resources

It is these booming minerals sector and untapped oil/gas reserves of the nation that the EU and its activist states seem to have their eyes on. And the political machinations outlined above are the tools with which they intend to ultimately attain control over them. This is a complex imperialistic scheme that is driven by a tripartite alliance between the EU, political establishments of its activist member states and transnational corporations.

The potency of this alliance is personified by Lapo Pistelli, formerly Italy’s Vice Minister of Foreign Affairs and a member of the Italian and European Parliaments. In early 2015, he brokered the restoration of Eritrea’s relations with both Italy and the EU. Few months later, he left government to become the vice-president of ENI, an Italian oil giant which has declared enthusiasm about Eritrea’s “interesting oil reserves”![2][5]

Britain is taking the lead in what is expected to be a rush by Europe for resource grab in Eritrea. In January 2014, a British exploration and development company, Ortac Resources acquired a substantial stake in Andiamo Exploration Ltd.[3] This move injected additional capital into the latter’s exploration effort thereby boosting British interests in the country’s mining sector.

About a month later, the chairman of Soma Oil and Gas, Lord Michael Howard led a group of  British businessmen on a trip to Eritrea to explore investment opportunities in the country’s hydrocarbon sector. Lord Howard is not just an oil company executive, but also UK’s former conservative leader.[5] Curiously enough, at the time of the visit, a delegation from the EU was also in the country to discuss “development partnership, regional peace and security.” It is therefore obvious that what seemed a simple private-sector initiative was perhaps a larger economic agenda being pushed by the concerted efforts of all three legs of the triad!

Perhaps reacting to calls for foreign investment by the Eritrean government, Tullow Oil Plc’s vice president for Africa traveled to Eritrea a year later. It is known that, in his meetings with relevant government officials, he expressed interest in acquiring some unspecified offshore exploration blocks.[6] Just about a month ago, a German delegation composed, not surprisingly, of government and business representatives visited Asmara to discuss bilateral development cooperation with the regime

The UN Security Council has imposed international sanctions on Eritrea’s government for the last six years. On the other hand, the EU recently concluded a cooperation agreement with, and channelled funding support to, the regime. Many observers view these international responses as being at odds with each other. But in the context of the geopolitics of Western powers, these seemingly conflicting measures are, in fact, complementary aspects of their “carrot and stick” strategy of domination and exploitation.