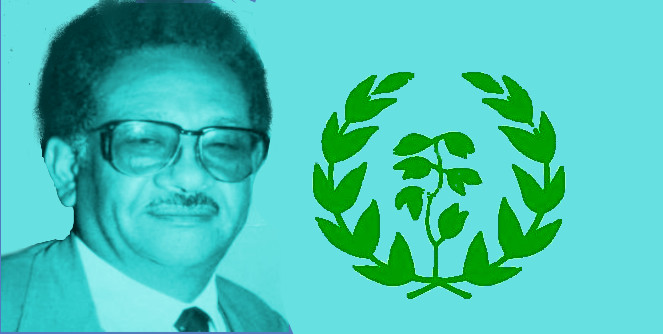 On June 25, 2019,  Ali Mohammed Said Berhatu, a relentless patriot, a veteran of the struggle for the independence of Eritrea passed away silently in London. As many of his peers, he exhaled his last breath thousands of miles away from home, his country that he wished to retire and live his last days in. It was not to be; Eritreans are condemned to stay away from the country they love. Away from the country the dedicated their youth for.

The following is what we gathered about his life, his roles, and his influences, from his colleagues and those who knew him.

Hussein Bagher, one of his close friends and colleagues eulogized him with a lamentation: “I never thought that someday I will eulogize a departed hero with unusual courage from this world. Indeed, as every living thing, our veteran also passed away.”

Bagher characterized Ali Berhatu, as “the intellectual, the literally giant, the cultured man.”

In the early 1930s (corrected), Ali Berhatu was born in Hirghigo, a small town on Red Sea shore, about 11 miles south of Massawa; it was a town that gave birth to many leaders of Eritrea’s liberation movements.

Since childhood, Ali Berhatu was recognized as highly gifted and known for his oratory skills, and his love for writing and reading.

Hussein Bagher narrated that on one of the occasions of the Mawlid Al-Nabi (Prophet’s birthday), the 14-year-old Ali Berhatu ascended the podium at the Sayed Taher Mosque in Hirghigo and astounded the gathering with his pose and character by eloquently delivering a speech written for the occasion by the late Mohammed Osman Hassen Habib.

In his childhood, Ali Berhatu worked at the bookstore of his uncle, the late Beshir Osman Beshir, who also owned the first non-government printing press where the ‘Voice of The Rabita’ was printed. Berhtau’s mastery of the Arabic language at a very young age afforded him the ability to write for the paper throughout the 1950s and to establish himself as a major opinion leader of his time.

According to one of his friends, working at the bookstore didn’t only earn a living, but afforded him an opportunity to read books on different topics, and he reaped an extensive knowledge that gave him a window to the outside world. He went through the books on the shelves, unaware that the bookstore provided him with bridges to the realm of vast knowledge and one such bridge connected him to an Egyptian magazine called “Akhr Al Mesa’a”, (The Latest of the Evening). He submitted an article to compete with select students from many parts of the world to win a scholarship, and He was selected as one of the winners. Therefore, it was time to leave for Egypt, a journey he travelled alone, by slipping through the border, illegally, exposing himself to risks. But he made it to Cairo, Egypt, where he stood face to face with the famous Akhbar Al Youm publishing edifice. Berhatu’s journey astounded the then Editor in Chief of  Akhr Sa’a, the late Helmi Salama, who was surprised how a teenager in pursuit of education could take such an undertaking and travel the journey to Egypt alone.

The scholarship provided him with an opportunity to finish his school at Helwan Secondary school, where he was approached by the Eritrean political organizations; namely, the ELF and the Eritrean Liberation Movement ( Haraka) organizers. But Ali Berhatu didn’t join any.

Berhatu enrolled at the Cairo University and studied law, and also attended classes at Al-Azhar University.  But his thoughts about Eritrea never left his mind, always preoccupied with the notion of “Eritrea for Eritreans.”

In the 1950s, when the European colonization was coming to an end,  many national liberation movements’ leaders from Africa and Arab countries were based in Cairo. Berhatu, whose world outlook was shaped by the struggles of these movements,  wrote extensively and popularized the  Eritrean cause in the Arab world.

Berhatu finished his studies in Egypt, and in 1959-60 returned home to start a teaching career in his hometown, at the Herghigo School, which was built in 1944 by the late philanthropist   Saleh Pasha Ahmed Keckia, who also gifted ‘Merakto’, a  marketplace he built  in Addis Ababa, as a perpetual endowment to finance its operations from its rental income.

After a teaching stint in Hirghigo, Berhatu transferred to Asmara where he taught at the Arab Community school that provided him with an opportunity to meet with members of the Eritrean Liberation Movement.

In the early 1960s, Berhatu moved to Addis Ababa and worked with the Ethiopian Airlines as one its principal legal advisors. In the mid-1960s, he traveled to the USA and earned a master’s degree in International Law from Stony Brook University.

Because the Hirghgo high school was considered a hotbed of political activism, it attracted the attention of the Ethiopian troops stationed at the nearby Agip oil storage facility. Among Berhatu contemporaries was the late Osman Saleh Sabbe who was the school’s director in 1955.

Before the residents of the town fled to Sudan following the 1975 and 1976 massacres that claimed the lives of 350 of people, many of the high school graduates joined the ELF and later the PLF. Both Sabbe and Berhatu shaped the political views of their students and subsequent generations who joined the armed struggle.

With the support of the former students, Sabbe formed the PLF, but later they parted ways with him and merged with two other factions to form the EPLF. The former students included: Ramadan Mohamed Nur, Mohamed Ali  Omaru, Ibrahim Aafa, Ali Sayed Abdela, Ramadan Awaleyay, Ahmed Badouri, Mohammed Ali Dafla, Ibrahim Sardar, Idris Sayed, and many others who played important roles in the Eritrean struggle for independence.

Berhatu has authored several books including, A Covenant Towards National Liberation (1989), Focus on the  Eritrean Revolutions, and This is the Solution (haza huwa’l Hal ) (2001)—a book that articulated a governance model for Eritrea’s multicultural society.

Berhatu had occupied many positions in different organizations, and through the 1970s and 80s, he was the editor of ‘ The Vanguard’, the ELF/PLF newsletter.  He is credited with forming the first Eritrean Lawyers  Association in Cario in the early 1970s. And as a lawyer and human rights advocate, he played an important role in 1970s in urging the UNHCR to protect refugees’ rights in the Sudan and to expand its services in the camps.

In his eulogy, Hussein Bagher said,” The late Ali Berhatu lived an honorable life, he was a trustworthy person who hated hypocrisy, and did not abandon his principles. Berhatu was a man of his words who didn’t engage in pettiness, but lived graciously never giving up in times of difficulties.”

Others friends described Berhatu as a skilled conversationalist and a well versed intellectual in a wide range of topics in addition to Eritrean politics.

The Awate Team extends its condolences to his surviving wife, his family, as well to his great-nephew, our very own team member, Dr.Khaled Beshir.

NB: The article used excerpts from eulogies written by  Hussein Bagher, and the Eritrean Liberation Front.